BOYS IN BROWN CONCLUDE TRAINING CAMP WITH A WIN

The Boys in Brown marked the end of their summer training camp in Herzlake with a 2-1 friendly win over SV Meppen on Wednesday afternoon. Borys Tashchy opened the scoring from the penalty spot in the third minute before René Guder levelled for the third-division outfit on 51. But Under-23 striker Christian Stark grabbed a late winner seven minutes from time to end the training camp on a positive note.

Head coach Timo Schultz fielded almost a new team compared with the one beaten 1-0 by Werder Bremen in the first friendly of training camp, with Jannes Wieckhoff the only player to start for a second time. The Boys in Brown made a perfect start when referee Franz Bokop pointed to the spot following a foul on Leon Flach from a third-minute corner and Borys Tashchy drove the penalty into the bottom right corner to give his side an early lead.

The Boys in Brown dictated the play in the opening quarter of an hour and fashioned their next chance from another corner. Flach met the ball at the far post but directed his header narrowly wide. Meppen, who are now coached by former pro Torsten Frings, slowly began to escape the stranglehold exerted by Timo Schultz’s side, winning two corners and a free-kick that all came to nothing. Willi Evseev then plucked up the courage to go for goal and his effort fizzed just past the top-right corner. Almost immediately, Wieckhoff burst down the right after some excellent link-up play with Christian Viet, but his ball in unfortunately found no takers.

The match settled into an evenly balanced affair in which neither side was able to fashion chances. Both defences gave nothing away in open play and also defused the few set pieces that came about, ensuring it remained 1-0 to the Boys in Brown at the break. 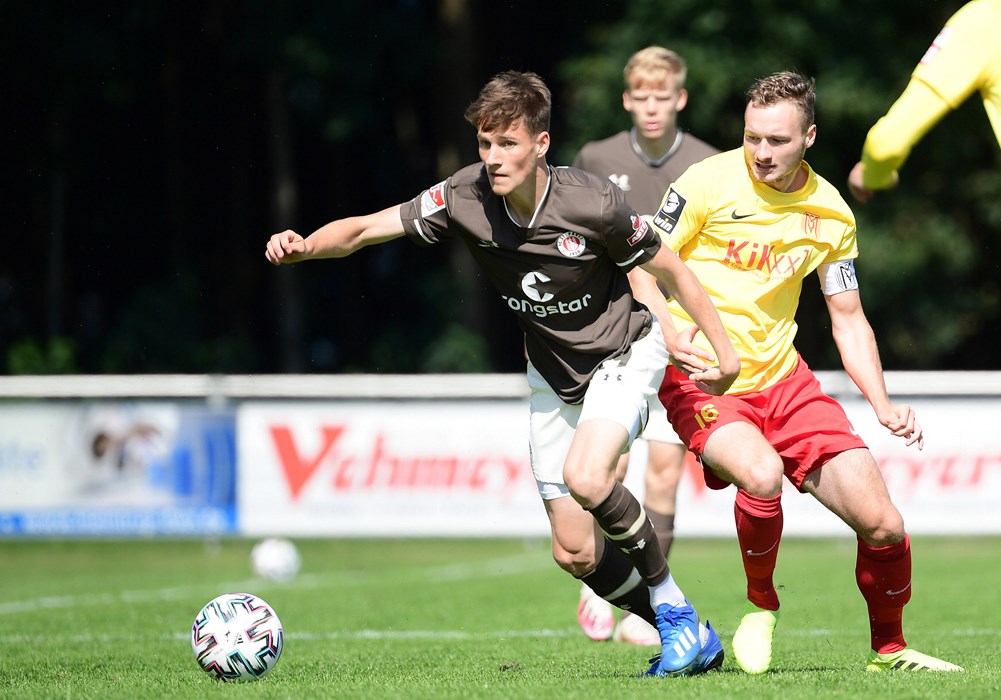 Schultz made four changes for the second half, introducing Dennis Smarsch, Afeez Aremu, Lukas Daschner and Serkan Dursun for Svend Brodersen, Rodrigo Zalazar, Daniel-Kofi Kyereh and Borys Tashchy. Torsten Frings also made four substitutions, including René Guder for Halil El-Helwe, and within three minutes the new man found the net with a powerful shot from a good 20 metres to level the scores.

The third-division outfit were in the ascendency now and carved out further chances. They were unable to find a way past Smarsch, however. First, the keeper clawed the ball off the line from a corner, and then he recovered quickly to keep the rebound out at the near post. After Schultz had made five more changes – Rico Benatelli and Christian Viet were now the only survivors from the starting lineup and went on to complete the game – substitute Maximilian Dittgen got away down the left and whipped a cross into the middle, where Under-23 strikers Serkan Dursun and Christian Stark only narrowly failed to make contact.

The Boys in Brown gradually wrested back control of the proceedings in their search for a second goal, but the Meppen defence were keeping things tight at the back. Seven minutes from time they did succumb, however, when Stark arrowed a shot into the near corner of the net from the edge of the box to ensure his team ended their summer training camp on a high.