St. Pauli won 3-1 at Fortuna Düsseldorf on Friday evening to secure three crucial points in the battle for second division survival. In a furious finish with two sendings-off for the home side, Andre Hoffmann put Fortuna ahead before goals from Philipp Ziereis, Christopher Buchtmann and Aziz Bouhaddouz turned it round for Ewald Lienen's men.

For the second week in a row St. Pauli were pitted against a side who had been sucked into the relegation mire late on in the season. Last week it was Kickers Würzburg, this week Fortuna Düsseldorf. Ewald Lienen had a full squad to choose from for the trip to the Rhineland and made just one change, Bernd Nehrig returning from suspension at the expense of Johannes Flum. For Fortuna, former St. Pauli man and leading scorer Rouwen Hennings missed out due to illness. He was replaced by Özkan Yildirim.

The first incident of note was an unfortunate one. From a St. Pauli free-kick, Bernd Nehrig and Kevin Akpoguma collided in an aerial challenge and required lengthy treatment on the field. Nehrig eventually hobbled off the pitch, but the Fortuna defender had to go off on a stretcher. Both players were taken to hospital for further checkups, forcing the two coaches into early substitutions. Lienen opted for Johannes Flum, while Friedhelm Funkel introduced Marcel Sobottka. In the ensuing period both sides took time to get going again in light of what had gone before.

With 20 minutes gone the home side fashioned two chances in quick succession. An Oliver Fink header was easy meat for Philipp Heerwagen, but 60 seconds later the keeper could only look on when Christian Gartner clipped the outside of the post with a shot from an Ihlas Bebou cross. Lienen's side had several promising opportunities going forward in the opening half-hour but lacked bite in the final third. Their first half chance came on 32 minutes when Aziz Bouhaddouz met a Christopher Buchtmann cross on the volley without troubling Michael Rensing in the home goal. At the other end Gartner was left completely unmarked on the edge of the box, but slipped in the act of shooting and the ball flew well wide.

The two sides shared the possession equally but it was Fortuna who had the better chances to open the scoring. Buchtmann had to step in at the very last minute to deny Yildirim, who only had Heerwagen to beat, after Jeremy Dudziak had been checked while attempting to clear. The defender dislocated his left shoulder in the challenge and was unable to continue. Daniel Buballa took his place in the back four. In the six minutes of time added on at the end of the first half both sides had decent chances. Fink went close for the home side, and then Mats Møller Dæhli came within a whisker of connecting with a cross. Buballa, who was stood behind him, was unable to bring the ball under control and the two sides went in level at the break. 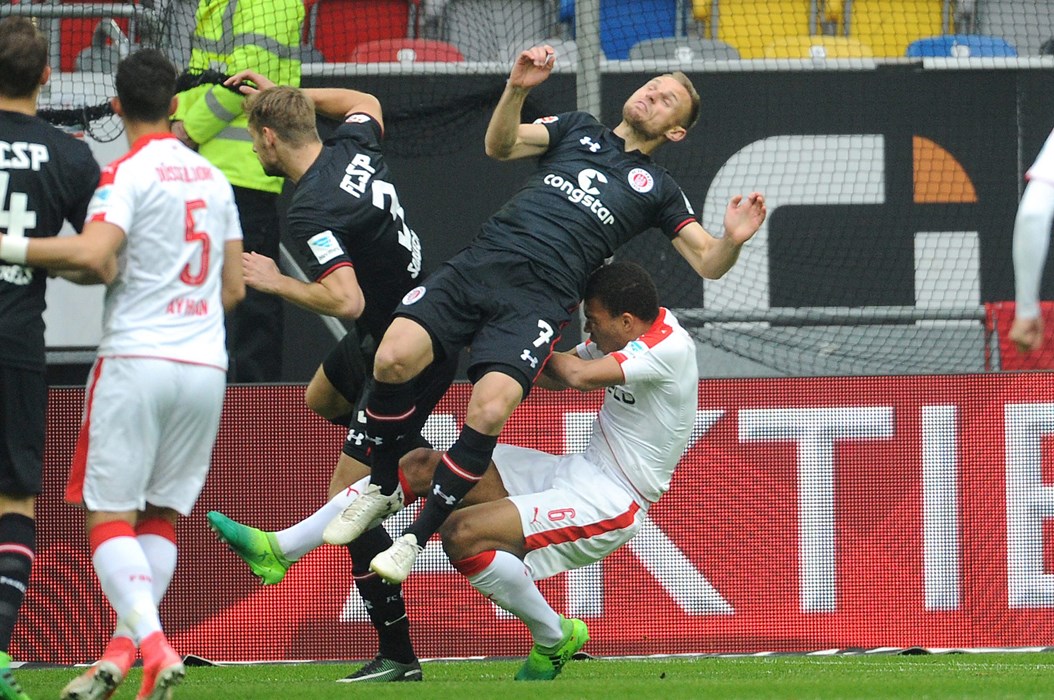 Awful scene early on: Bernd Nehrig and Düsseldorf's Kevin Akpoguma clattered into each other and were taken to hospital, where the Fortuna defender was diagnosed with a C1 vertebra fracture.

Both teams emerged unchanged for the second half. Fortuna hit the ground running after the restart and earned a number of set pieces on the break, but with the two defences standing firm a shot from Bebou that failed to trouble Heerwagen on 63 was the only action of note for some time. It wasn't long before the game burst into life, however. Adam Bodzek, who had already been booked, had to resort to a foul to stop Cenk Sahin on the break and the referee had no choice but to send the midfielder off. Nevertheless, Düsseldorf almost took the lead moments later, but Heerwagen and Flum joined forces to clear the danger after Bebou had found Yildirim in space in the middle.

In the 72nd minute the home side did find the net, however. Lienen's side failed to clear their lines from a corner and Andre Hoffmann pounced on a loose ball to leave Heerwagen no chance with a shot into the bottom corner. Bouhaddouz had a great chance to level within minutes but was denied by a smart stop from Rensing. Philipp Ziereis made no mistake two minutes later, though, capitalising on confusion in the penalty area following a free-kick to restore parity. It was to get even better five minutes later when Sahin was brought down by Hoffmann on the edge of the box and the goalscorer was dismissed for a last-man foul. Buchtmann stepped up and curled an unstoppable shot past Rensing into the net to make it 2-1.

The two-man advantage made it much easier for Lienen's side to keep the ball away from their own goal, and Bouhaddouz put the game to bed in stoppage time with a lofted ball over Rensing after Buballa had put the striker through with a textbook pass in behind the advancing defence. The Boys in Brown were left to celebrate their third win in succession and three immensely important points in the battle against the drop, though their joy was tempered by the injuries to Bernd Nehrig and Jeremy Dudziak and Düsseldorf's Kevin Akpoguma.