GRITTY PERFORMANCE UNREWARDED AS FCSP GO DOWN AGAINST DÜSSELDORF

St. Pauli slipped to a 2-1 defeat against league leaders Fortuna Düsseldorf in front of another sell-out crowd at the Millerntor on Saturday afternoon. Goals from Takashi Usami and Rouwen Hennings gave the visitors a two-goal lead before Cenk Sahin halved the deficit before the interval. The Boys in Brown rallied in the second half but were unable to find an equaliser despite a host of good chances.

Head coach Olaf Janßen made two changes to the side that won 1-0 at Holstein Kiel in the week. Sami Allagui came in for Aziz Bouhaddouz, who failed a late fitness test on a tight calf, while Cenk Sahin got the nod over Johannes Flum. Fortuna boss Friedhelm Funkel made four changes after the 1-0 home defeat of Regensburg, with former St. Pauli man Rouwen Hennings featuring in the starting lineup. At the end of a busy run of fixtures both teams were targeting another three points. Düsseldorf set out to reclaim top spot, while the Boys in Brown, who started the day on 13 points, hoped to draw level with Fortuna and Kiel (both 16).

After a cautious opening by both sides in which Nico Gießelmann saw a 6th minute free-kick blocked, the visitors took the lead on nine minutes. Gießelmann whipped in a cross following a corner and the ball bounced off Kaan Ayhan's knee straight to Takashi Usami. The Japan international, on loan from FC Augsburg, took aim and hammered an unstoppable shot into the top-right corner of the net.

Olaf Janßen's looked unsettled after conceding the early goal and struggled to find a way through the visitors' compact rearguard. Fortuna, however, remained incredibly effective. Jean Zimmer's pass took a wicked deflection off Christopher Avevor, and Hennings was presented with the chance to take the ball past Robin Himmelmann and slot home at the near post to make it 2-0 after 23 minutes.

The Boys in Brown kicked off determined to avoid a repeat of the first half against Ingolstadt, which saw them concede four times, and on 27 they thought had pulled one back when Waldemar Sobota latched onto to a long pass by Himmelmann and stuck the ball past Fortuna keeper Raphael Wolf. Referee Dr Felix Brych ruled that Sobota had fouled Düsseldorf's Jean Zimmer in the run-up, however, and the goal was not allowed to stand. A questionable decision.

Seven minutes later there was no debate, however! Richard Neudecker fed Jeremy Dudziak, who knocked the ball to Sahin 25 metres out. Sahin wrongfooted Robin Bormuth and pulled the trigger, and the ball flew into the top-right corner of the net to reduce the deficit. On the stroke of half-time Sahin was in the action again, crossing into the middle for Daniel Buballa to attempt a diving header, but Ayhan snuffed out the danger with a determined challenge. 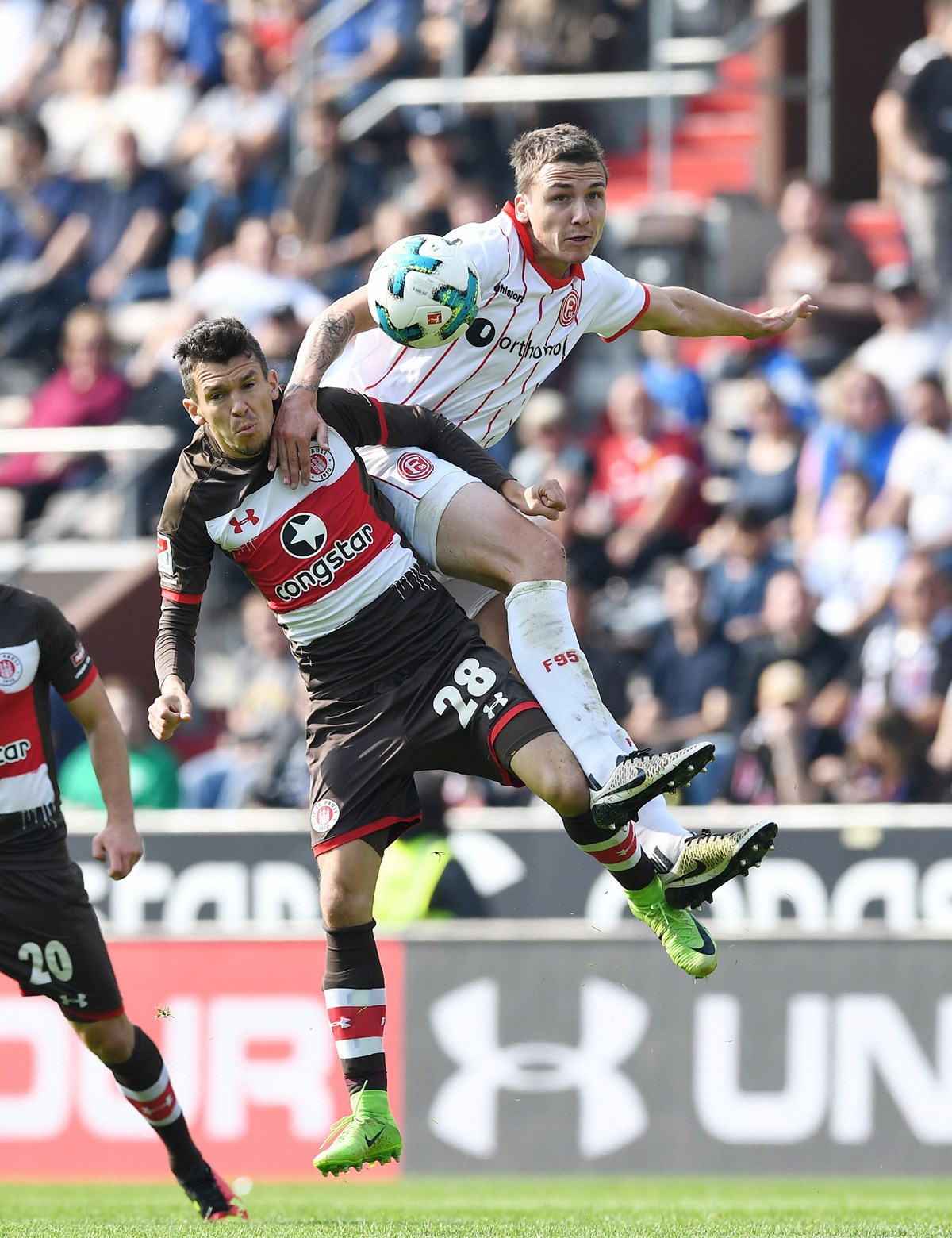 Waldemar Sobota challenges for the ball with Düsseldorf's Marcell Sobottka

Both teams came out unchanged for the second half and the Boys in Brown immediately cranked up the pressure. Four minutes in a St. Pauli free-kick caused some confusion in the Düsseldorf box and the ball fell to Luca Zander, but his hooked effort from ten metres was just too high.

With the visitors now defending deeper, Janßen's team began to dictate the play and fashioned the next opportunity on 55 when Buballa chased the ball to the byline and dispatched a cross into the middle, where Allagui's header look set for the far corner until Wolf produced a fine save to divert the ball wide. Seven minutes later Janßen made his first substitution, introducing Flum for Neudecker.

The Boys in Brown continued to press, but it was Düsseldorf who had two chances to extend their lead, the first when Sobiech just managed to defuse a shot from Fortuna substitute Benito Raman and then when Hennings rifled a shot just wide from 20 metres. In between those two chances Janßen made a second change in Maurice Litka for Dudziak.

On 74 minutes there were loud claims for a penalty at the other end when Allagui went down in the Fortuna box. Bormuth did have his hands on the St. Pauli striker, but Brych waved play on to the dismay of everyone in brown and white. Four minutes later the fans were infuriated again when Allagui headed a Zander cross into the net with the help of the left-hand upright, only for the goal to be ruled out. He was at least a metre offside, however, so the decision was correct.

In the closing stages the Boys in Brown threw everyone forward. Sobiech met a Neudecker corner with his head on 81, but was unable to get enough power on it and Wolf made a comfortable save. Two minutes later Sobiech, now operating as an auxiliary centre-forward, directed another header towards goal from a Sobota cross, but the ball flew well wide.

The best chance to equalise arrived in the 86th minute. Sahin slipped the ball to Allagui, who unleashed a powerful shot on the turn, but Ayhan was alert to the danger and diverted the ball out for a corner. Litka then floated the ball to Christopher Avevor at the back post, whose header flew wide left.

Dramatic scenes unfolded in the last few minutes. After Wolf had pushed a Sobiech header round the post, the Boys in Brown had another penalty claim turned down when Litka's cross was blocked by a Düsseldorf defender with his hand. Once again, Brych declined to point to the spot, and from the resulting corner Flum had a shot cleared off the line by Julian Schauerte.

In the third minute of time added on Litka had one more go from range, but Wolf again made the save and then it was over. A fine battling performance was not enough to prevent a 2-1 defeat against the old and new league leaders.