BOYS IN BROWN SLIP TO FINAL DAY DEFEAT AT FÜRTH

FC St. Pauli went down 2-1 at Greuther Fürth on the final day of the season. Dimitrios Diamantakos restored parity two minutes after Fabian Reese had given Fürth a 51st minute lead. When Brian Koglin was sent off on 61 the home side went in search of a winner and eventually got it in the second minute of stoppage time through Richard Magyar.

The prime objective going into the final game of the 2018-19 season was to send the 3,000 or so travelling fans home happy with a win. But it was also about achieving an improved position vis-à-vis rivals Heidenheim and Bochum when it comes to the distribution of TV revenue. Head coach Jos Luhukay made just one change to the side that drew with Bochum last time out, Ryo returning from suspension to replace YiYoung Park. And after a long injury layoff and several appearances for the Under-23s, Marc Hornschuh celebrated his first call-up to the squad this season. On the other hand, Sami Allagui and Justin Hoogma both made their final appearances for the club.

Luhukay's side made the brighter start compared with a Fürth side featuring five changes. They moved the ball around nicely, though the key through balls to the strike pairing of Allagui and Diamantakos lacked the necessary precision in the opening stages. That was to change in the 14th minute when Finn Ole Becker sent Allagui on his way. His chip over goalkeeper Marius Funk landed just the wrong side of the left-hand upright, however. Two minutes later the Boys in Brown almost took a deserved lead through Miyaichi, who collected a pass from his skipper, Allagui, and hit a shot on the turn, only to see it fizz past the post on the right.

Luhukay had every reason to be happy with his side's performance, though perhaps not with the finishing. The Boys in Brown were giving nothing away at the back and created the next opening for Kevin Lankford after 22 minutes. His low shot produced a fine reflex save from Funk. At the other end of the park, Robin Himmelmann was not called upon to intervene until the 34th minute. That said, Daniel Keita-Ruel's technically adept first-time effort lacked the power to pose a genuine threat. Soon after that the game, and the season, was over for Jan-Philipp Kalla, who took a knock and had to be replaced by youngster Luis Coordes. It was in this phase that his teammates rather carelessly relinquished their grip on the game. They were almost made to pay on 39 when the unmarked Julian Green smashed a shot against the crossbar at the far post. That was to be the last incident of note in the first half and the two sides went in goalless at the break. 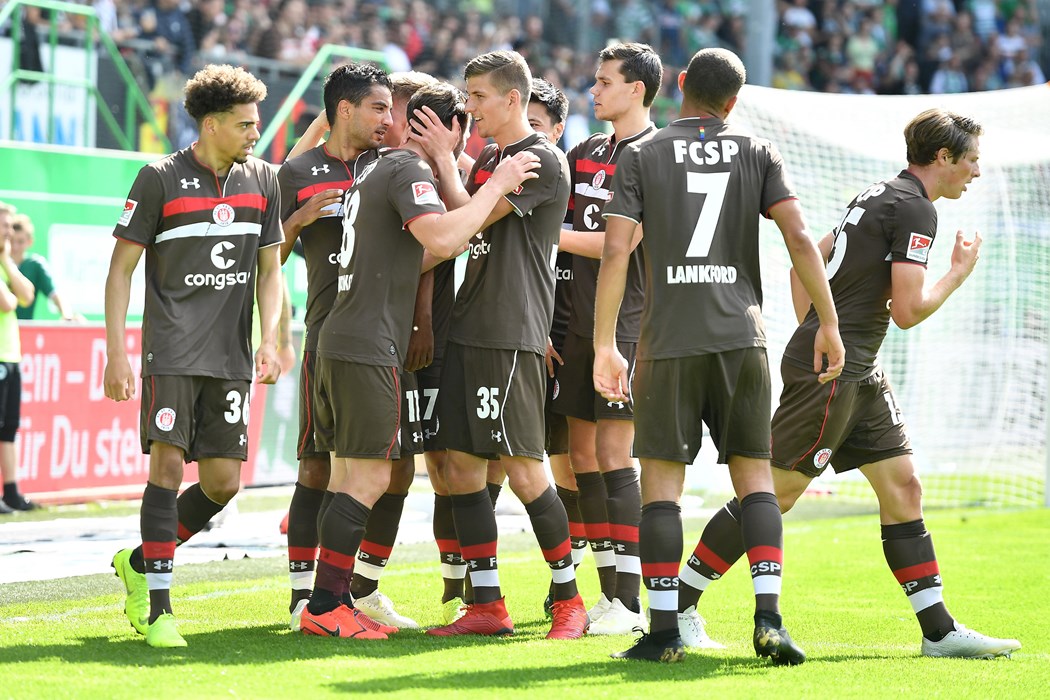 The players celebrate after Diamantakos levels the scores on 53.

The home side had had the better chances towards the end of the first half and they took the lead six minutes after the restart. Richard Magyar headed a free-kick from the left-hand side back across goal, where Reese was on hand to prod the ball home. The Boys in Brown needed a fitting response and they found it just two minutes later when Becker picked out Diamantakos with a neat through ball and the Greece striker shot past Funk to restore parity.

Six minutes later there were angry scenes on the touchline when Maximilian Wittek caught Miyaichi with an elbow and was fortunate to escape with just a booking. Brian Koglin had no such luck soon after. He was shown a yellow card for an aerial challenge and, as he had already been booked in the first half for a foul in midfield, a red was to follow. Luhukay responded by introducing centre-back Florian Carstens for Allagui. The game descended into a scrappy affair after that and it was not until the 75th minute that the fans were treated to any genuine action again when substitute David Atanga rattled the crossbar from distance with Himmelmann reduced to looking on.

Down to ten men, the Boys in Brown had few opportunities to relieve the pressure on their goal and so Luhukay opted to bolster his attack with the introduction of Alex Meier on 79 minutes. The move almost had the desired effect four minutes later when Mats Møller Dæhli saw a goalbound shot blocked. Kenny Prince Redondo then declined an opportunity to restore his side's lead, instead volleying past the angle when unmarked on the corner of the goal area.

The Boys in Brown did their best to hold on but eventually conceded a second goal in time added on. A Julian Green corner found its way to Magyar, and he slid the ball home to win the game for Fürth. That an Atanga cracker twanged the crossbar on the stroke of full-time was of little import and the home side were left celebrating the end of the season with a win.

BOYS IN BROWN OUT TO EXTEND UNBEATEN RUN AT DARMSTADT

The 1-0 home defeat of Nürnberg saw the Boys in Brown make a winning restart in Bundesliga 2 last Sunday. Jos Luhukay's side now aim to build on that success by securing a result in their first away game after the coronavirus-induced break at Darmstadt – preferably in the shape of another victory.