The Boys in Brown went into the game having won the last two games before the winter break at the Millerntor, yet without a success on the road this season. The objective was thus clear, and that was to continue the momentum from December and banish the away curse at the same time. The question was whether Jos Luhukay, after an injury-free winter break, would make any changes to the side that beat league leaders Bielefeld last time out. He did not, opting to field the same 11 players who dispatched Arminia 3-0.

The match began with something of a heart-stopping moment when Finn Ole Becker almost caught out Robin Himmelmann with a slightly undercooked backpass, but the keeper was out of his goal quickly to tidy up. There was more alarm in the seventh minute when Luca Zander allowed a ball to slip through to Branimir Hrgota, and the Swedish forward took the ball round Himmelmann, only to hit the side netting from a tight angle. St. Pauli fired off their first warning shot four minutes later. Henk Veerman teed up the advancing Sebastian Ohlsson with a lovely backheel, but the full-back was unable to get the better of keeper Sascha Burchert.

Luhukay's side stepped their attacking efforts but initially only had a string of corners to show for their efforts. The excitement levels turned up a notch in the 17th minute, however, when Zander sent Veerman on his way with a long ball forward and the Dutchman brought it down and netted, only for the goal to be ruled out for a handball. The home side then had a shout for a penalty when a Maximilian Wittek shot struck Leo Østigard on the arm, but referee Christopf Günsch waved play on, and Himmelmann was well placed to deny Wittek on the rebound. There was a brief lull in the action midway through the first half, with the flow of the play disrupted by a series of stoppages, and in this stage of the game the Boys in Brown had a second goal disallowed. Viktor Gyökeres was pulled up for a foul on keeper Burchert, who had his hands on the ball before the striker headed home.

Both teams continued to huff and puff but struggled to hit the heights. A harmless effort by Havard Nielsen on 41 minutes was about as exciting as it got. But just as if it was looking as if the half would end goalless, Hrgota struck. The striker created some space for himself with a feint in a central position and beat Himmelmann with a pinpoint low drive into the bottom right corner from 25 metres to leave the Boys in Brown behind at the interval. 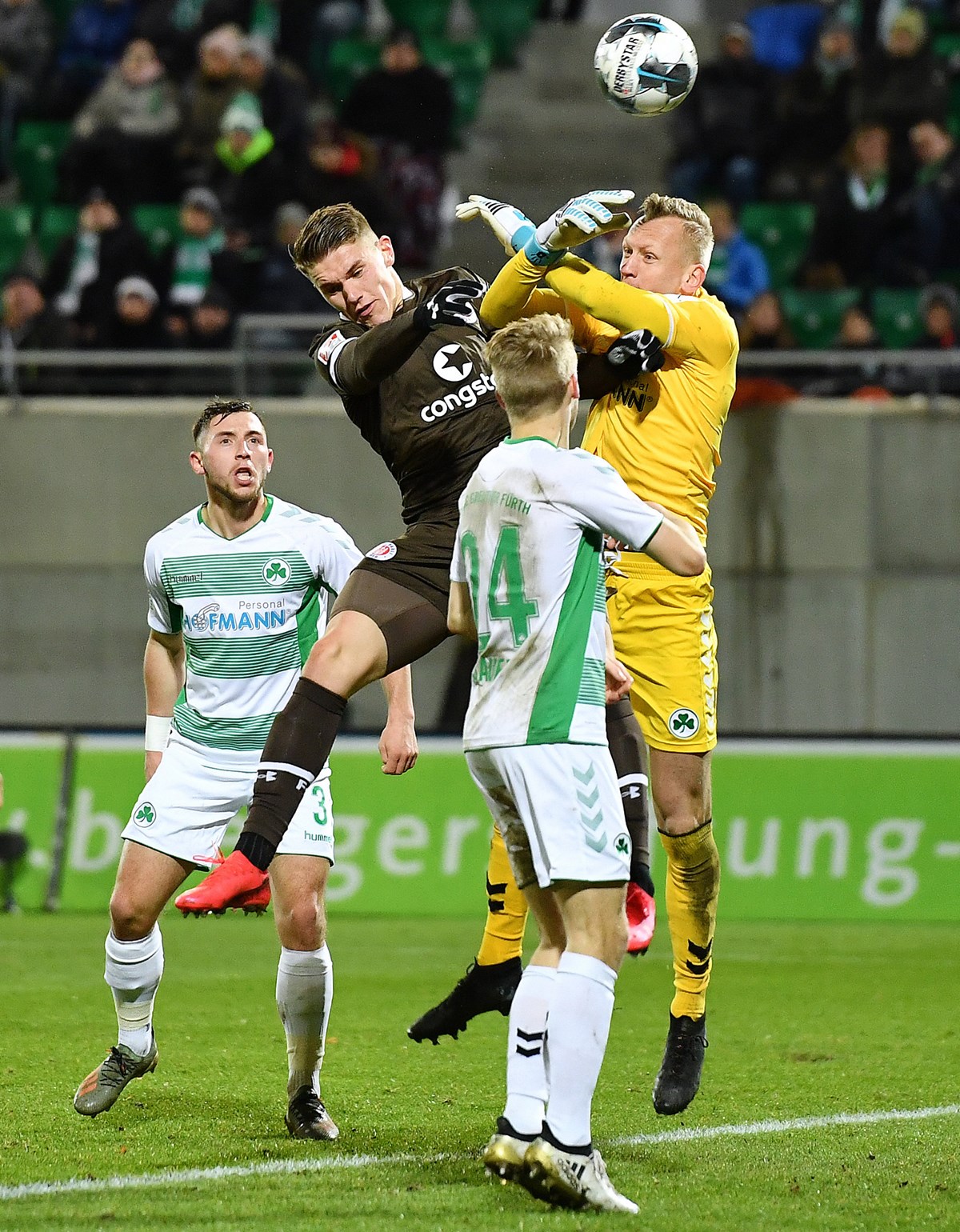 Viktor Gyökeres thought he had given his side the lead in the 34th minute but was pulled up for a foul.

The two sides began the second half unchanged, though the home side had had to bring on Jamie Leweling for the ailing Julian Green before the break. Leweling it was who had the first opportunity of the second half, Himmelmann turning his 53rd minute volley round the post for a corner. Fürth increased their grip on the proceedings, ensuring Luhukay's side had hardly a look-in. The St. Pauli boss responded by introducing Rico Benatelli and Boris Tashchy for the central midfield pairing of Christopher Buchtmann and Finn Ole Becker. Though the Boys in Brown were able to keep the ball further away from their own goal in the ensuing period, their attacking efforts lacked precision, as did the only attempt of note in this phase through Gyökeres in the 66th minute. Tashchy went closer nine minutes later but got underneath the ball a little and sent his shot over the bar. Luhukay then rolled the dice one last time with the introduction of Matt Penney for Luca Zander on 77.

Hrgota came within a whisker of extending his side's lead in the 80th minute when he collected a deflected shot completely unmarked in front of goal, but he was taken slightly by surprise and put his shot wide. The chances then came thick and fast, and after Burchert had denied Veerman with all the alarm bells ringing, Tashchy directed a glancing header wide just wide of the goal. The Boys in Brown could have been level, but instead Leweling put the game to bed, rounding off a counterattack down the left with a shot that beat Himmelmann from a tight angle. Daniel Keita-Ruel, who had already been on target in the reverse fixture, added a third with a curling shot into the far corner in time added on, thus ensuring the Boys in Brown remain without a win away from home this season.