St. Pauli are back! In front of 29,005 fans at the Millerntor on Saturday afternoon the Boys in Brown earned a deserved 3-0 victory over direct rivals Greuther Fürth. Dimitrios Diamantakos gave his side an early lead and substitute Johannes Flum doubled the advantage before the break before Richard Neudecker sealed things in the second half.

Head coach Markus Kauczinski made four changes to the team that lost 3-1 at Regensburg last week, Lasse Sobiech, Jeremy Dudziak, captain Bernd Nehrig and Mats Møller Dæhli all returning to the starting lineup. Yiyoung Park and Daniel Buballa dropped to the bench, while Cenk Sahin and Sami Allagui watched from the stands due to suspension. Winless in their last seven outings, the Boys in Brown operated in a 4-2-3-1 formation with Philipp Ziereis (right) and Dudziak (left) in the full-back positions and Dimitrios Diamantakos up front. Fürth, themselves without a win in three, made just one change, Julian Green returning from a one-match ban to replace Levent Aycicek.

In bright sunshine the Boys in Brown got off to a racing start, creating two opportunities in the first three minutes. Møller Dæhli screwed a shot wide of the post with just 35 seconds on the clock, and then Diamantakos narrowly failed to get on the end of Christopher Buchtmann's ball in. Kauczinski's charges maintained the pressure and quickly won two corners. Christopher Avevor couldn't get a proper contact on the first but the second did the trick. Buchtmann floated the ball in, Ziereis flicked it on at the near post and Diamantakos rifled a shot into the net from seven metres.

Sporting their all-black third strip, Kauczinski's side defended solidly, fighting for every ball and winning the plaudits of the crowd for every successful sliding tackle. Up front, they continued to occupy the Fürth backline. Ziereis blasted over from another Buchtmann corner on 14 minutes and 60 seconds later Buchtmann was denied by Sascha Burchert after a fine attacking move. The visitors almost sneaked an equaliser on 18, however. Lukas Gugganig stole the ball on the edge of the penalty area and fed Khaled Narey, whose low shot rolled past the far post.

The Boys in Brown suffered a setback on the half-hour when Buchtmann had to go off injured. The midfielder was replaced by Johannes Flum. Almost immediately, Avevor underhit a backpass to Robin Himmelmann and Serdar Dursun nipped in. The Fürth striker pulled the trigger from a tight angle but thankfully Himmelmann was alert to the danger. At the other end Richard Neudecker teamed up with Jan-Philipp Kalla, with the latter knocking an intelligent ball for the former to run onto in the box, but Burchert spotted the danger and raced out of his goal to gather.

There was nothing the Fürth custodian could do two minutes later, though. Neudecker collected the ball on the right and knocked it to Møller Dæhli, who burst into the box and whipped the ball into the danger area. Burchert could only parry, and Flum stooped low to head the ball over the line. That was the last action of note and the Boys in Brown went in at the half deservedly two goals to the good. 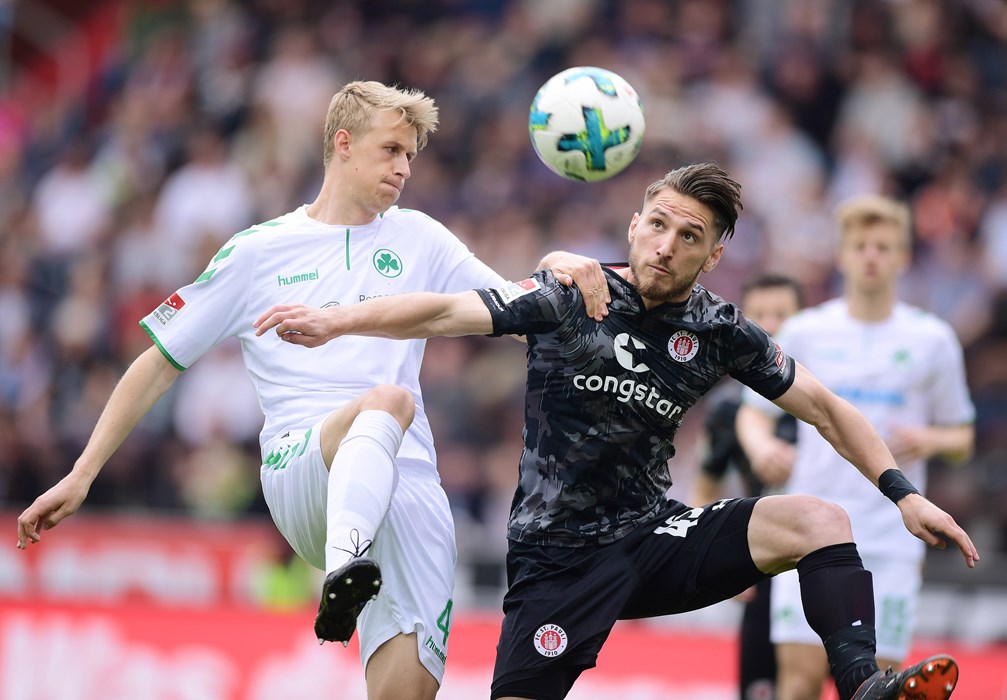 Dimitrios Diamantakos, who scored his first competitive goal for the club today, challenges for the ball with Fürth's Lukas Gugganig.

Fürth coach Damir Buric made a switch at half-time, introducing striker Fabian Reese for midfielder Jurgen Gjasula. The pattern remained the same, however, with the Boys in Brown continuing to push forward. Nehrig fired wide right from 30 metres and then last man Maximilian Wittek just about managed to win a challenge against Diamantakos as he went to ground – otherwise the Greek striker would have been clean through.

Kauczinski was forced into a second substitution in the 58th minute. Nehrig, back from a lengthy injury layoff, had run himself into the ground and was replaced by Yiyoung Park. Fürth looked to capitalise and Roberto Hilbert fed Dursun, who backheeled the ball to Green. His shot from the edge of the box was too centrally placed, however, and Himmelmann made a comfortable save.

Two minutes later the Boys in Brown showed the visitors how it was done at the other end. Diamantakos crossed from the left-hand side, Møller Dæhli flicked it on and Neudecker hammered a pinpoint shot into the top left corner of the net to make it 3-0. Four minutes later Møller Dæhli turned provider again, this time finding Flum with an intelligent cutback. His effort from 20 metres zipped past the left-hand upright into the side netting.

The visitors continued to push forward despite finding themselves three down but were unable to find a way through the solid St. Pauli rearguard. Various attempts from long range flew off target. The Millerntor remained a cauldron of noise, with the crowd celebrating every successful sliding tackle and every challenge won. And there was plenty of applause for Møller Dæhli, too, when he departed the field of play on 76 to be replaced by Sobota.

In the 78th minute Diamantakos, who was impressive throughout, evaded a challenge on the left, charged into the penalty area and attempted to play the ball to Sobota – Burchert was alert to the danger, however. Kauczinski's side then saw out the closing stages with no major alarms to secure a deserved 3-0 victory over one of their rivals in the battle to avoid relegation.

LUHUKAY: "IT'LL BE TOUGH, BUT NOT IMPOSSIBLE"

The games are coming thick and fast in Bundesliga 2 at the moment, with the Boys in Brown back in action on Wednesday already when they entertain FC Heidenheim at the Millerntor (18.30 CET). At the pre-match news conference, head coach Jos Luhukay spoke about...