KYEREH CROWNS RELIABLE DEFENSIVE DISPLAY WITH ONLY GOAL AGAINST KIEL

FC St. Pauli defeated league rivals Holstein Kiel 1-0 in a friendly contested behind closed doors on Thursday afternoon. The Boys in Brown were the better side in the first half but drew a blank in front of goal until Daniel-Kofi Kyereh eventually conjured up a winner in the 66th minute.

Head coach Timo Schultz fielded a completely different side from the one that started in the 4-1 defeat at Werder Bremen the previous day. There was nothing new about the weather, though, with the rain pouring down as in the second half against Bremen. Both teams looked to get forward in the early stages but there were no chances of note at either end. Maximilian Dittgen did have a shot blocked by a Kiel defender with eight minutes gone, while Marvin Senger slid in to stop Kiel's opening foray into the penalty box at the other end five minutes later.

The Boys in Brown were the busier team from the outset and fashioned a string of chances midway through the first half. Kevin Lankford fired over from the inside-right channel in the 20th minute and three minutes after that Simon Makienok almost headed his side in front following a cross from Luca Zander. Holstein keeper Ioannis Gelios was able to turn the ball around the post, however. Just 60 seconds later, Dittgen pinged a shot just over from 20 metres. The pressure continued and after a foul on Lankford, Rodrigo Zalazar curled a free-kick over the wall, but Gelios was gathered comfortably. The pattern repeated itself four minutes later, with the Kiel custodian again claiming the ball from another Zalazar free-kick, albeit at the second attempt this time.

Schultz's side gave little away against the current league leaders and if they did allow a chance, keeper Robin Himmelmann was not seriously tested. Phil Neumann skewed a shot well over from the edge of the penalty area, though to be fair it was a difficult ball to deal with, and then Himmelmann had no trouble collecting a Lion Lauberbach header. That was the last action of the first 45 and the two teams went in at the break goalless. 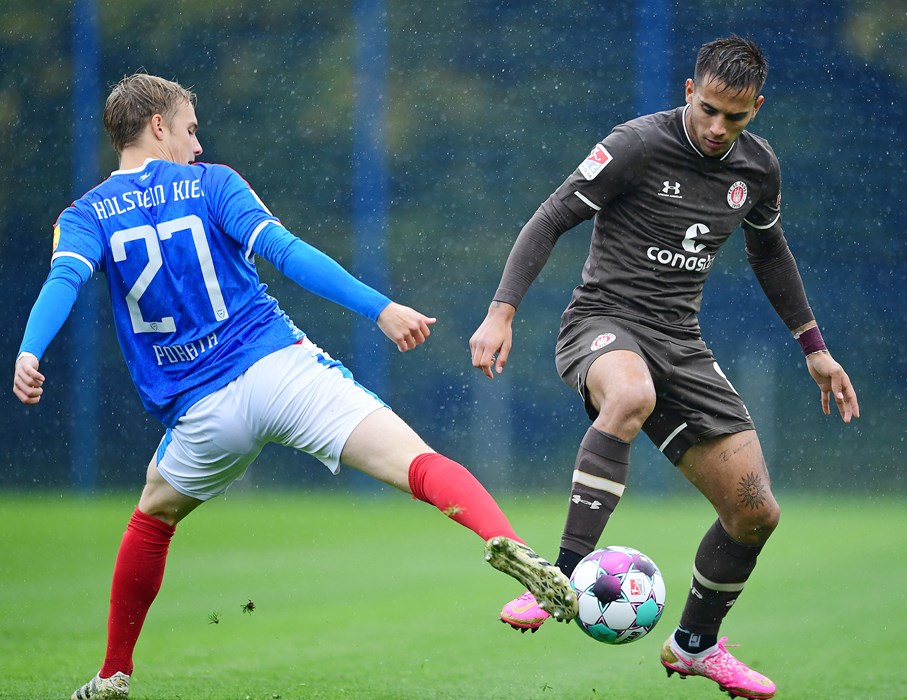 Rodrigo Zalazar (here in a challenge with Kiel's Finn Porath) had two free-kicks saved by Kiel keeper Ioannis Gelios in the first half.

The Boys in Brown hit the ground running after the interval but were unable to work any chances despite creating some promising situations. At the other end, Ahmet Arslan did get a shot off, but the ball fizzed just past the post. Almost immediately, Daniel-Kofi Kyereh must have thought he had given his side the lead with a first-time effort, only to see Gelios produce a fine save to defuse his powerfully struck shot.

The game ebbed and flowed, and Kiel carved out another chance in the 58th minute, substitute Niklas Hauptmann rifling a shot wide from just outside the box. Shortly afterwards, Makienok got his foot in the way of a mishit Gelios clearance. The ball rebounded back towards the empty net but eventually rolled wide.

Kyereh then unselfishly tried to pick out Makienok, and in so doing squandered a decent opportunity to shoot in the Kiel box, but he took full advantage a little later. The former Wiesbaden man beat a Kiel defender for pace, took the ball round Gelios and finished into the empty net. One-nil! Kyereh had also opened the scoring in the friendly between the two sides in mid-August, but on that occasion, Kiel recovered to win 2-1. Would the Boys in Brown come out on top this time?

A solid St. Pauli rearguard ensured the home side were unable to mount a serious threat after falling behind. Instead, substitute Borys Tashchy had an opportunity to double the advantage seven minutes from the end. His shot from the inside-right channel flew a whisker past the far post.

Yet with three minutes left the home side could have levelled things following a break down the right-hand side, but Christopher Avevor slid in just in time to prevent an unmarked opponent from finishing. And so it remained 1-0 to the Boys in Brown, a victory they thoroughly deserved over the 90 minutes.

"We had good pressure on the ball throughout today and created a lot of chances," said head coach Timo Schultz afterwards. “We made some wrong decisions in the first half when we kept wanting to lay the ball off one more time instead of going for goal direct. We could have scored two or three in that period. All in all, it was a well-deserved win.”