The draw for the first round of the DFB Cup was made by Nia Künzer at the German Football Museum in Dortmund. The Women's World Cup winner pulled VfB Lübeck out of the pot first and then the Boys in Brown, which means a trip to Schleswig-Holstein after the opening two games of the league campaign.

It is a repeat of the first-round tie in August 2016, when the Boys in Brown won 3-0 in front of 13,300 fans at Lohmühle Stadium thanks to goals from Vegar Eggen Hedenstad, Sören Gonther and Marvin Ducksch. Also involved that day were Christopher Avevor, Waldemar Sobota, Philipp Ziereis, Ryo Miyaichi and Christopher Buchtmann, among others. 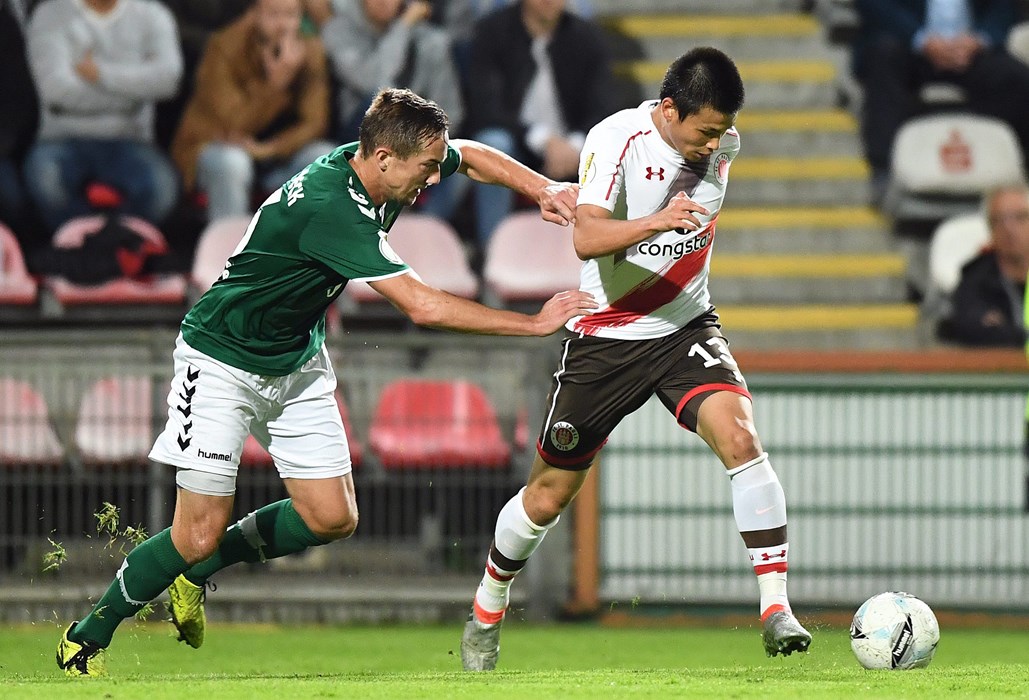 Ryo Miyaichi is challenged by Lübeck's Enes Dagli in 2016.

Reaction to the draw:

Director of sport Andreas Bornemann: "Lübeck is not far so lots of fans will want to go. The game has a certain derby character. Being the second-division side, it will be important for us to take up the role of favourites, but we're up against an ambitious fourth-tier outfit who will also want to play a role. We'll need to approach the game with determination, concentration and conviction to progress to the next round."

Head coach Jos Luhukay: "It's good the game isn't far away and there's sure to be a great atmosphere there. VfB Lübeck were impressive last season and only just missed out on promotion. We have respect for our opponents but as the second-division side we obviously want to go through. I went to Lübeck as the coach of KFC Uerdingen in 2001 and 2002, but that's a long time ago now."

Jan-Philipp Kalla: "We had to wait quite a long time during the draw and the number of teams left in the pot gets smaller and smaller towards the end. A northern clash against Lübeck isn't a bad draw in my view. We're the favourites, that's clear, and we'll be aiming to go through to the next round. We had a good experience at Lübeck in 2016. I was in the squad that day and remember the game well. We had a lot of fans with us and the atmosphere was superb. I remember giving my shorts away through the fence. I don't know what made me do it, but I was left standing there in my undies."

All the first-round ties at a glance:

BOYS IN BROWN OUT TO EXTEND UNBEATEN RUN AT DARMSTADT

The 1-0 home defeat of Nürnberg saw the Boys in Brown make a winning restart in Bundesliga 2 last Sunday. Jos Luhukay's side now aim to build on that success by securing a result in their first away game after the coronavirus-induced break at Darmstadt – preferably in the shape of another victory.