DRAMA IN LÜBECK: BOYS IN BROWN GO THROUGH ON PENALTIES

The first round DFB Cup tie at VfB Lübeck had it all. After 120 high-octane minutes, Robin Himmelmann produced the decisive save in the penalty shootout to ensure his side's passage to the second round. Goals from Waldemar Sobota, Dimitrios Diamantakos and Marvin Knoll saw the Boys in Brown come from behind to lead after Yannick Deichmann and Marvin Thiel had put the home side two up, only for Ahmet Arslan to restore parity just before the end of extra-time. The resulting shootout ended 4-3.

The never-ending injury saga again forced head coach Jos Luhukay to rejig his starting lineup going into the cup clash with the fourth-tier outfit. The Dutchman made four changes to the side that began against Greuther Fürth, Marc Hornschuh coming in for the injured captain Christopher Avevor. There were also first starts this season for Christopher Buchtmann, Waldemar Sobota and striker Viktor Gyökeres. Jan-Philipp Kalla, Niklas Hoffmann and Jakub Bednarczyk dropped to the bench. Luhukay sent his team out in a 3-5-2 formation, with Buchtmann operating centrally behind frontmen Gyökeres and Dimitrios Diamantakos.

In their all-black away strip, the Boys in Brown made a bright start, with Gyökeres, in particular, full of energy. The Sweden forward popped up twice in promising positions early on, only to see his shot blocked on both occasions. When the goal eventually came, however, it was the home side who got it. Ahmet Arslan found Yannick Deichmann in space, and the former St. Pauli man beat Robin Himmelmann with a mistimed effort that took a deflection off Daniel Buballa on its way in. Luhukay's charges took a while to regain their composure after the early setback. Diamantakos tried his luck with an acrobatic overhead kick that missed the target. At the other end, Deichmann went closer two minutes later with a header that flew just past the post.

In the ensuing period, St. Pauli struggled to create openings against a combative Lübeck side who carried a constant threat on the break. The best opportunity to level thus came from a free-kick on 26 minutes, but Mats Møller Dæhli's effort was too centrally placed to trouble the keeper. Christian Conteh had a decent shout for a penalty five minutes later, but referee Frank Willenborg saw nothing wrong with Daniel Halke's sliding tackle that ended the youngster's run. The Boys in Brown continued to press but were unable to find a way through, and thus went in a goal down at the break. 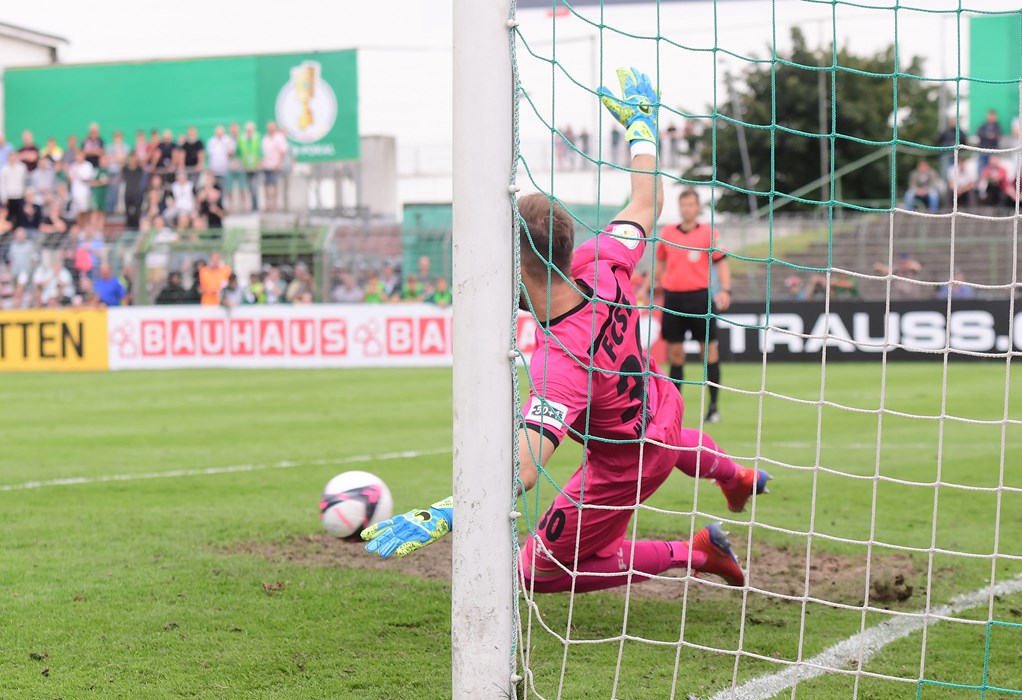 An unchanged side hit the ground running after the restart. Diamantakos and Møller Dæhli had efforts blocked in quick succession, Gyökeres doing the spadework on both occasions. But in a repeat of the first half, it was the home side who got the goal, Møller Dæhli deflecting Thiel's shot past Himmelmann on 55. This time, however, the Boys in Brown had an answer – and what an answer it was. Miyaichi provided the pass for Sobota to sweep past Lukas Raeder in fine style on 63, and three minutes later Diamantakos headed the equaliser from a Møller Dæhli cross.

With the home side beginning to falter in the closing stages, the Boys in Brown set up camp in the Lübeck half, boosted by the introduction of fresh legs in the shape of Kevin Lankford, Cenk Sahin and Jakub Bednarczyk. For all their efforts, though, they were unable to fashion any clear-cut opportunities. The atmosphere reached boiling point when the home side had two penalty appeals turned down in the closing stages, ensuring the 90 minutes ended all square.

Extra-time began with a bang, much to the delight of the 2,300 travelling St. Pauli fans. Diamantakos saw a shot on the turn deflected for a corner, and when the ball came in Knoll rose majestically at the near post to nod home. Buoyed by the lead, the Boys in Brown moved the ball around nicely, preventing Lübeck from having a sniff of goal.

In the second period of extra-time, however, Lübeck were the busier side. That said, Diamantakos could have put the result beyond doubt on 114 minutes when released on the break. The Greek striker took the ball round Raeder, only to see his shot hit the outside of the post. Almost immediately, the Boys in Brown were made to pay when Ahmet Arslan, played in by substitute Miguel Fernandes, found the far corner with a low drive to level the scores. To make matters worse, Diamantakos was then shown a red card for kicking out at the Lübeck keeper. And so it went to a shootout in front of the travelling FCSP fans. After Knoll had converted the final penalty for his side with aplomb, it was left for Himmelmann to stick a foot out to deny Fernandes and send the Boys in Brown through to the next round.

"Our focus is on keeping performance levels high"

Performance coaches Christoph Hainc Scheller and Karim Rashwan are in big demand in the current phase, not only when it comes to creating individual training plans for the players, but also in fielding questions from the media. In a telephone interview with Hamburg journalists on Wednesday, Christoph and Karim spoke about their work at the moment and…