Next up after the 2-2 draw at SV Sandhausen is the visit of FC Nürnberg for what will be the fourth-last home game at the Millerntor on Sunday (13:30 CET). Although the football side of things has taken a bit of a back seat in the last few days, we've taken a closer look at our forthcoming opponents as usual.

FCN have gone in front more often than anyone else this season, i.e. 16 times in the 25 matches played so far. They went on to win just seven of those games, however, and even lost three. The Franconians have dropped 21 points in total after taking the lead, more than any other team. The 14 goals they have shipped in the final quarter of an hour are one reason for that. No other team has conceded more in the closing stages.

With 45 goals against so far, the relegated Bundesliga side have the worst defence in the league apart from Karlsruhe (46). Set pieces have been a particular weakness, with 17 of those goals coming from dead-ball situations. On the other hand, Nürnberg have conceded the fewest from opposition counterattacks. Their record was untarnished until last week, when Hannover's Linton Maina put one past them on the break.

Counterattacks are not exactly Nürnberg's strong point, with just three of their goals coming this way. In the air they have been much better, though. Nürnberg already have 12 headed goals to their name - a league best. Seven different FCN players have scored with headers, captain Hanno Behrens leading the way with three.

Nürnberg have had to make do without more than half a dozen players due to injury recently. They have been particular hard hit in goal, to such an extent that four different keepers have featured between the posts so far this season. Christian Mathenia, who broke his kneecap in the last action of the reverse fixture, has made 15 appearances. Felix Dornebusch, who was signed during the first half of the season, has five, and Andreas Lukse and Benedikt Willert both have two.

While Nürnberg have the second-lowest tackle success rate of 47.77 per cent, they come to the Millerntor with the league's best tackler in their ranks. Centre-back Georg Margreitter has won 126 of his 186 duels for an impressive 67.74 per cent success rate. The Austrian, who has featured in just 12 of the 25 games played so far due to injury, leads the rankings ahead of Karlsruhe's Daniel Gordon (66.67 per cent) and Stuttgart's Nathaniel Phillips (66.42 per cent). 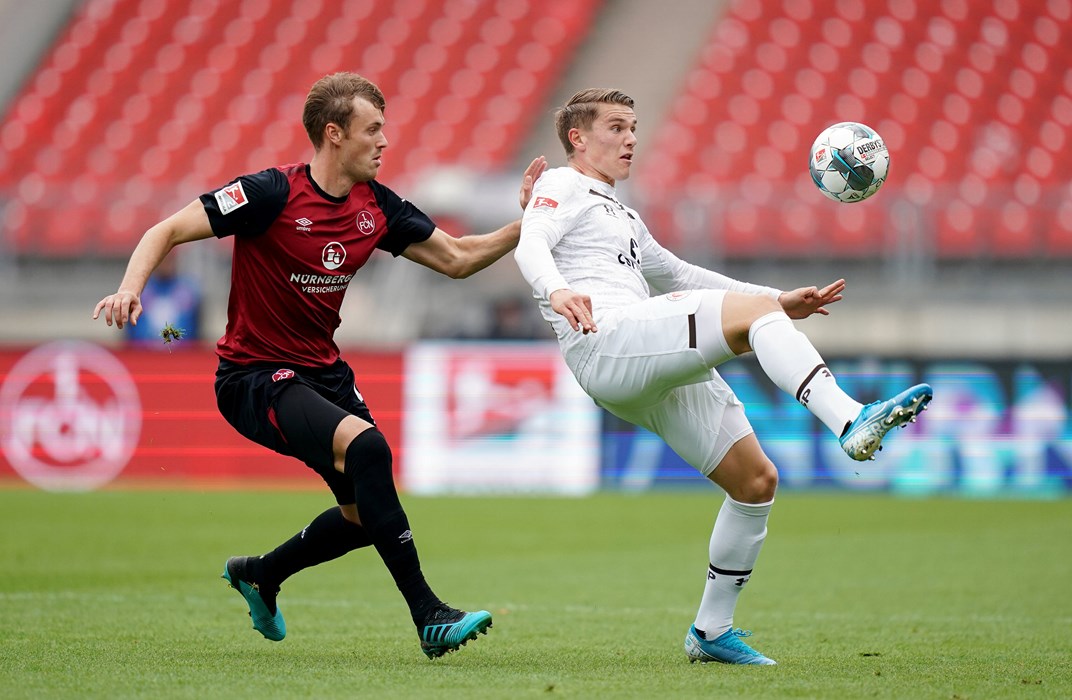 Nürnberg's Asger Sörensen, seen here challenging Viktor Gyökeres in the reverse fixture, has already been sent off twice this season.

Nürnberg defender Asger Sörensen is one of four second-division players to have been sent off twice this season, but the Dane is the only one to have been shown two straight reds. In the 4-3 defeat at Aue he was given his marching orders for a handball on the line, while in the 3-3 draw versus Darmstadt it was a last-man foul on Serdar Dursun that proved his undoing.

LUHUKAY: "WE CAN'T SIMPLY THINK OF OUR OWN HEALTH"

In times of the corona pandemic, head coach Jos Luhukay finds himself confronted by a host of new challenges. One is to reconcile his players to the current circumstances, despite all the uncertainty, and prepare them for a return to full training at some unknown time in the future. We spoke to him about the latest situation.

DFL CALLS OFF ROUND 26

The German Football League (DFL) suspended all matches in Round 26 on Friday afternoon due to the continuing spread of the coronavirus and new developments regarding infections and suspected cases affecting Bundesliga clubs.

The Boys in Brown have extended their unbeaten run to four games thanks to a 2-2 draw at SV Sandhausen. Viktor Gyökeres gave St. Pauli the lead on 28 minutes, but Kevin Behrens equalised from the penalty spot just before half-time. Robin Scheu put the hosts ahead just after the hour mark before Dimitrios Diamantakos levelled the scores on 78.