FC St. Pauli drew 1-1 at FC Nürnberg on Sunday. Viktor Gyökeres gave the Boys in Brown a first-half lead, only for Hanno Behrens to restore parity for the home side five minutes after the break. Jos Luhukay's team are now unbeaten in six matches but still await their first win away from home.

The game was a meeting of two in-form teams. Nürnberg went into the match on the ascendency and unbeaten in five, as did Jos Luhukay's charges, who had garnered two more points than Nürnberg in the same period. Accordingly, after seeing their teams stroll to convincing victories over Hannover and Sandhausen respectively last time out, neither coach saw reason to change his starting lineup or tactical approach.

With only goal difference separating the two teams, the fans flocked to the ground eager to see which one would carry last week's momentum into the 90 minutes. The opening exchanges were anything but spectacular, though, with both sides displaying impressive discipline and alertness at the back. The first attacking moment of note did not materialise until the ninth minute when Ryo Miyaichi attempted a first-time volley from Waldemar Sobota's cross. He appeared to be put off by Gyökeres, however, and sliced his shot well wide. Georg Margreitter registered the first opportunity for Nürnberg following a Johannes Geis free-kick 60 seconds later, but apart from a long-ranger from Nikola Dovedan on 22, neither side had much to show for their attacking efforts.

That was to change in the 23rd minute, though it was anything but clear-cut. Finn-Ole Becker sent Sebastian Ohlsson on his way down the right and his cross found Gyökeres, who drove a low shot into the bottom corner to open the scoring. The referee's assistant, however, had raised his flag for offside while the move was in progress – wrongly, as it turned out. After a review by the video assistant referee, the goal was awarded despite the perhaps understandable protestations of the Nürnberg players.

Stung by the goal, the home side began to push forward with more urgency and in the 31st minute fashioned a double chance for Hanno Behrens and Robin Hack. Both efforts were blocked by some courageous defending, however. Four minutes later, Lukas Jäger headed a Johannes Geis corner wide of Robin Himmelmann's goal.

The Boys in Brown continued to probe despite coming under increasing pressure, but it was the home side who were enjoying the better chances. Behrens saw a long-range effort come down on top of the net after Himmelmann had had to race out of his area to clear an upfield ball. The keeper showed good alertness again moments later when Michael Frey's shot took a deflection off Daniel Buballa, diving smartly to his left to turn the ball out for a corner.

The closest the home side came to an equaliser was in first-half stoppage time when Himmelmann produced a monster save to push a shot from Hack over the top with the help of the crossbar, ensuring his side went in at the break somewhat fortunate to be a goal to the good. 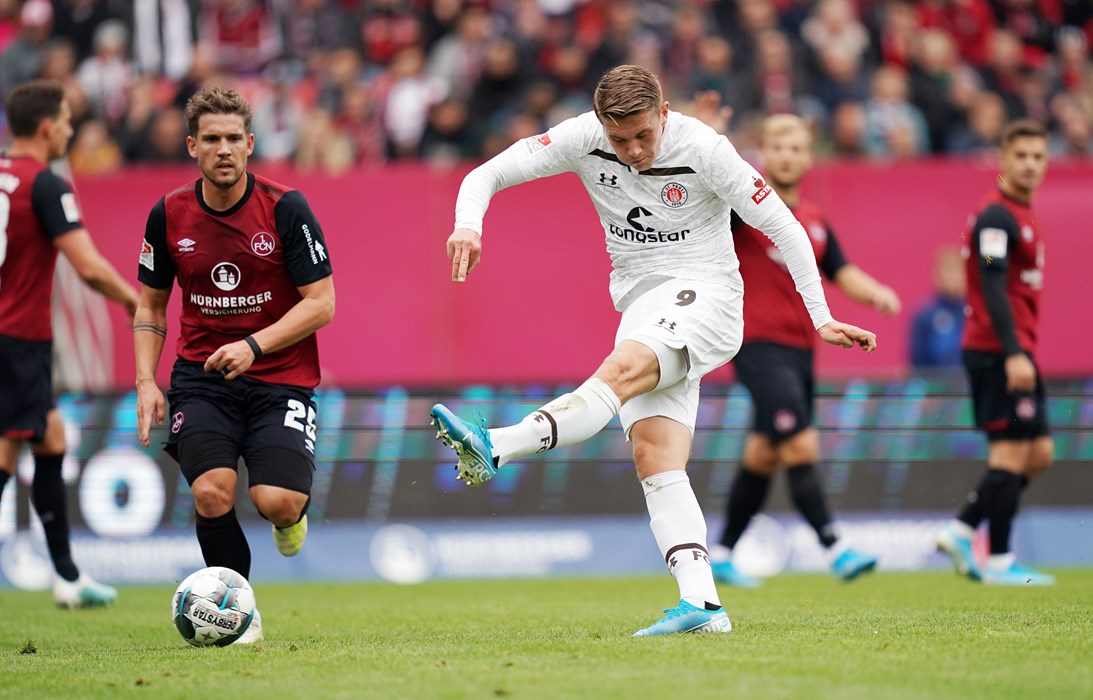 Jos Luhukay's side began the second half determined not to be pinned back in their own box again. But in the 50th minute Behrens levelled the scores with a crisp drive after Waldemar Sobota had unwittingly diverted a pass into the Nürnberg captain's path. The Boys in Brown showed exactly the right reaction, however, and almost restored their lead within seconds when Miyaichi did well to create space to set up Gyökeres, and only a last-ditch lunge by Oliver Sorg prevented the Swede from adding his second goal of the afternoon.

It remained an open encounter with both sides clearly intent on finding a winner. And in the 65th minute the 3,000 travelling fans thought they might have got one when Matt Penney cut the ball back for Mats Møller Dæhli to rifle a shot into the roof of the net. Referee Lasse Koslowski had other ideas, however, ruling that Penney had obstructed the goalkeeper's view while in an offside position. Therefore, the goal didn't stand.

Nürnberg created their first decent chance after the equaliser in the 75th minute when Himmelmann dived smartly to his left to beat away a powerful shot from Hack. The Germany Under-21 forward had another opportunity six minutes later, this time directing a header wide of the post from the penalty spot. Hack remained the player most likely to make a difference, and in the 86th minute the Boys in Brown were fortunate to see his angled drive smack back off the post following a corner from the left-hand side.

In the closing stages Nürnberg looked the more dangerous side but the Boys in Brown were not without their chances. Indeed, substitute Borys Tashchy could have won it in the final minute of time added on, only to be denied by Mathenia with all the alarm bells ringing in the home defence. Close, but not close enough, though a share of the spoils was probably the right result.