FC St. Pauli extended their unbeaten run to five games on Sunday afternoon. The 1-0 defeat of FC Nürnberg behind closed doors at the Millerntor gives the Boys in Brown an important cushion. Substitute Viktor Gyökeres notched the all-important goal in the 84th minute against a Nürnberg side reduced to ten men following the dismissal of goalkeeper Christian Mathenia for a last-man foul on 55.

It was strange to hear Hells Bells ring round an empty Millerntor Stadium. The Boys in Brown got a feel for the new conditions going into the run-in by training in the stadium during the week and watching Saturday's Bundesliga matches. Head coach Jos Luhukay opted to make two changes to the side that drew 2-2 at SV Sandhausen on their last second-division outing more than two months ago. Fit-again striker Henk Veerman returned to the starting eleven, with Sebastian Ohlsson getting the nod over Luca Zander.

When Daniel Siebert blew his whistle to start the game, Nürnberg elected to dispense with the customary cautious opening. With the game less than a minute old, Nikola Dovedan danced his way through the box before steering a shot just wide, and then Johannes Geis tested goalkeeper Robin Himmelmann. Our No30 was in the spotlight again for the first clear-cut chance of the game in the tenth minute. After a neat passing triangle with Hanno Behrens, Robin Hack slipped the ball through to Adam Zrelak, but Himmelmann raced out of his box to deny the FCN striker.

After that warning, the Boys in Brown were able to neutralise the proceedings and make a mark of their own. Dimitrios Diamantakos directed a header from the edge of the box to Waldemar Sobota, who was denied from a narrow angle by Christian Mathenia in the Nürnberg goal, as was Rico Benatelli on the rebound with his weaker left foot. The visitors cranked up the pressure again but were unable to eke out a half-time lead. Both Tim Handwerker and Johannes Geis forced brilliant saves from Himmelmann with free-kicks. The 31-year-old keeper would have been beaten two minutes from the interval, however, had Dovedan not screwed a Hack delivery wide of a half-open goal from ten metres out. 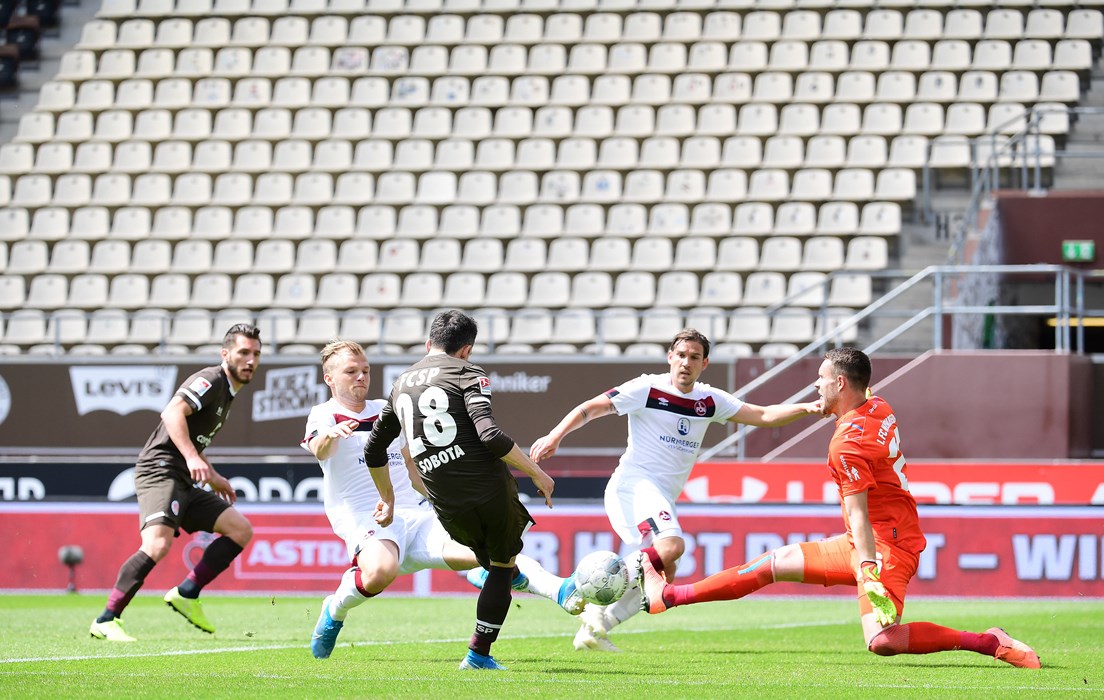 The best chance of the first half for the Boys in Brown fell to Waldemar Sobota (centre), who was denied from a narrow angle by Christian Mathenia (right).

The game took a crucial turn eight minutes after the restart when Sobota knocked the ball through to Veerman, who was brought down by Mathenia outside the box. Acting on a notification from video assistant referee Bibiana Steinhaus, Siebert judged it to be a last-man foul after viewing the replay footage in the review area and showed the FCN custodian the red card. Stand-in Felix Dornebusch, on for Johannes Geis, had little trouble gathering the subsequent free-kick from Marvin Knoll.

In the ensuing period, the visitors sat back and waited for a chance to land a decisive blow on the break. A man to the good, the Boys in Brown worked hard going forward but struggled to unlock the Nürnberg defence. Viktor Gyökeres came on and immediately livened things up. The substitute began by heading the ball across goal to fellow Swede Sebastian Ohlsson, who acrobatically volleyed the ball over the crossbar. Then, six minutes from time, the Brighton loanee drove into the danger area in textbook fashion and curled a shot into the far corner to win it. Jos Luhukay's side successfully saw out the game, including five minutes of time added on, to secure a crucial three points.