FC St. Pauli drew 2-2 with FC Nürnberg in front of 1,000 spectators at the Millerntor on Monday evening. In a fast-paced match, the visitors took an early lead through Manuel Schäffler that was cancelled out by Rodrigo Zalazar from the spot just before the half-hour. After the interval, Johannes Geis converted an early penalty for Nürnberg, but Daniel Buballa salvaged a deserved point with a fine strike 12 minutes from time.

Head coach Timo Schultz made three changes to the side that lost 1-0 at SV Sandhausen last time out. Leart Paqarada, Marvin Knoll and Lukas Daschner dropped to the bench and were replaced by Maximilian Dittgen, Rodrigo Zalazar and Guido Burgstaller. The former Nürnberg striker partnered Simon Makienok up front, with Daniel-Kofi Kyereh playing in the hole behind them.

In front of around 1,000 fans, the maximum allowed inside the Millerntor due to the current COVID-19 infection rate, the Boys in Brown hit the ground running and soon fashioned their first chance. Rodrigo Zalazar showed fine technique to drive a free-kick over the wall with power, but Christian Mathenia was well-placed to make the save. At the other end, Robin Hack found the net for the visitors in the fourth minute but the goal was ruled out for offside - a tight but correct decision.

The ball was in the net again four minutes later and this time it counted. Nürnberg took advantage of a wayward pass by Christopher Avevor to switch the play quickly. Johannes Geis knocked the ball over the top to Felix Lohkemper, who squared it for Manuel Schaeffler to leave Robin Himmelmann no chance from near the penalty spot.

St. Pauli brushed themselves down and soon created two chances to equalise. Maximilian Dittgen drove a shot over from the edge of the box after Enrico Valentini had lost possession and then Finn Ole Becker finished off some fine passing play by clipping the outside of the post from 14 metres. Burgstaller then tried his luck from deep following a throw-in, but dragged his shot a few metres wide.

The Boys in Brown were the busier side and dominated the possession, with the visitors sitting back and waiting for the error that would give them the chance to break. It was Schultz's side who carved out the next opportunity, though, when Kyereh played the ball to Dittgen on the left and his shot was tipped over the top by Mathenia. Another foray then ended with referee Florian Heft pointing to the spot after consulting with the video assistant. Kyereh had been brought down by Tom Krauß in the left corner of the box, a difficult one to see and there were no real appeals from his teammates. Zalazar, brimming with confidence after an impressive showing to that point, grabbed the ball and converted with aplomb.

Nürnberg had been largely anonymous for some time but suddenly carved out a magnificent chance. Fabian Nürnberger latched onto a long pass to square the ball to Hack, who with the goal at his mercy ballooned his shot over from 12 metres. At the other end, Simon Makienok headed straight at the keeper from a Dittgen cross. The Danish striker got enough power on the ball, but Mathenia made a comfortable save. The Nürnberg keeper was in action again just before the interval to deny Dittgen following some great work by Zalazar, ensuring the two sides went in level at the break. 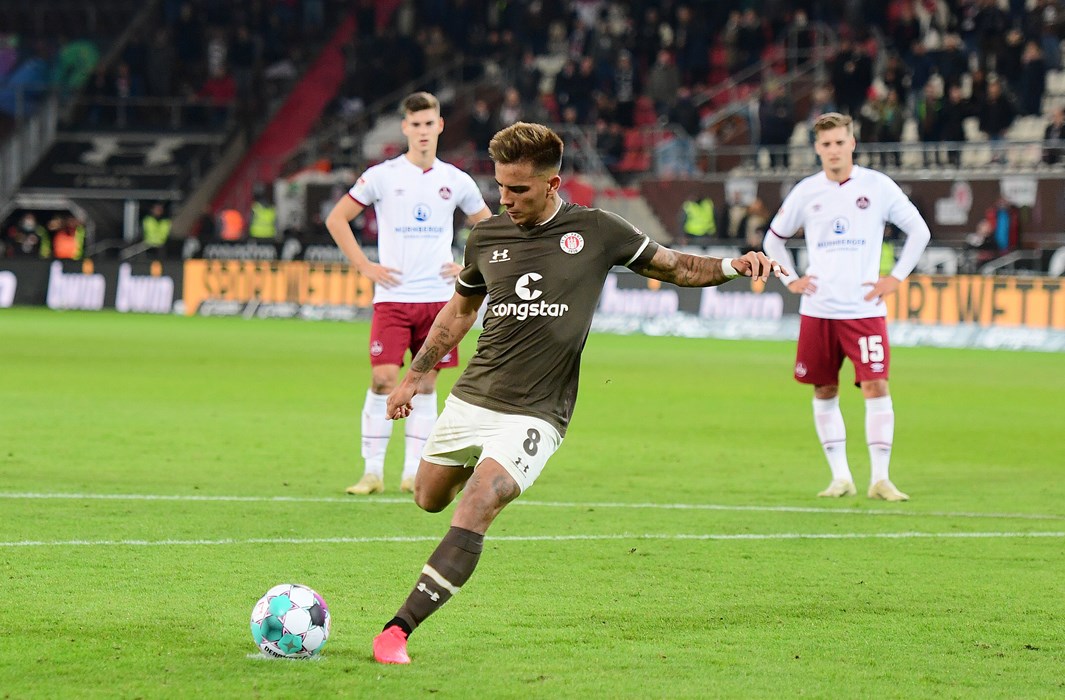 Rodrigo Zalazar was a driving force in the first 45 minutes. The Uruguayan was his side’s stand-out player and also converted a penalty.

Both sides emerged unchanged for the second half and within minutes the visitors were claiming a penalty when Fabian Nürnberger pulled the trigger from 20 metres and the ball struck Avevor on the arm as he turned away. It went to VAR again and again the penalty was awarded - a harsh decision. That was of no concern for Johannes Geis, who converted off the inside of the left-hand upright to restore his team's advantage. Himmelmann went the right way, but was powerless to stop it.

As in the first half, the Boys in Brown were left chasing the game early on and again looked to get forward, but struggled to breach a Nürnberg rearguard that was now better marshalled than before. At the other end, Geis went for goal from distance on the break - no trouble for Himmelmann. Schultz then made a double change, introducing Luca Zander and Marvin Knoll for Christopher Avevor and Philipp Ziereis in the back three.

The Boys in Brown continued to enjoy more of the game, albeit without creating any chances. Their play looked good as far as the penalty area, but the final ball lacked the necessary precision. Zalazar found Dittgen from the midfield channel, but his header was no problem for Mathenia. Entering the final quarter of an hour, Schultz made another double switch, Lukas Daschner and Boris Tashchy coming on for Maximilian Dittgen and Guido Burgstaller.

Makienok was then presented with a double chance, only to see his shot blocked both times. Within two minutes, however, the Boys in Brown were level, and it was Daniel Buballa who hit the target with a wonderful effort. A cross from Zander flew through the box and arrived at Buballa on the far side. He controlled the ball with his thigh and struck a powerful yet majestic shot into the far corner from 15 metres to make it 2-2.

The Boys in Brown continued to press as they went in search of a third goal and Zalazar had a shot defused by Mathenia shortly before being replaced by Rico Benatelli. Nürnberg also tried to get forward but were unable to threaten. Makienok went for goal one last time in time added but dragged his shot well wide, forcing the Boys in Brown to settle for just the one point despite being the better side.