VfL Osnabrück are the visitors to the Millerntor this Sunday (13:30 CET). Before the two teams do battle for another three points at the beginning of meteorological spring, we had a look at the statistics for the Lower Saxony outfit. Here's our fact file on our forthcoming opponents.

2020 hasn't been overly kind to Osnabrück, who have yet to win since the turn of the year, drawing three and losing two in their last five games. The promoted side have scored just once on their last three outings and their last success came on 15 December, a 3-0 home win over Dynamo Dresden.

The Osnabrück squad includes not one but three defenders taller than 1.90 m (6'2"). Centre back Joost van Aken (1.94), Lukas Gugganig (1.91) and Maurice Trapp (1.90) all top the six feet mark. Yet even Van Aken, who has one headed goal to his name this season, has some way to go to reach his compatriot Henk Veerman (2.01/6'6"). Like our own Matt Penney, the Dutch defender is on a 12-month loan deal from Sheffield Wednesday.

The only team to commit more second yellow offences than VfL Osnabrück this season are Hannover 96 (six). Osnabrück players have taken an early bath four times after collecting two bookings. A dismissal of a rather unusual kind occurred in round 19, when goalkeeper Philipp Kühn fouled Sandhausen striker Kevin Behrens in the penalty box and was shown the yellow card. Kühn saved the resulting spot-kick, but had moved off his line early, prompting referee Timo Gerach to order the kick to be retaken and brandish a second yellow card. 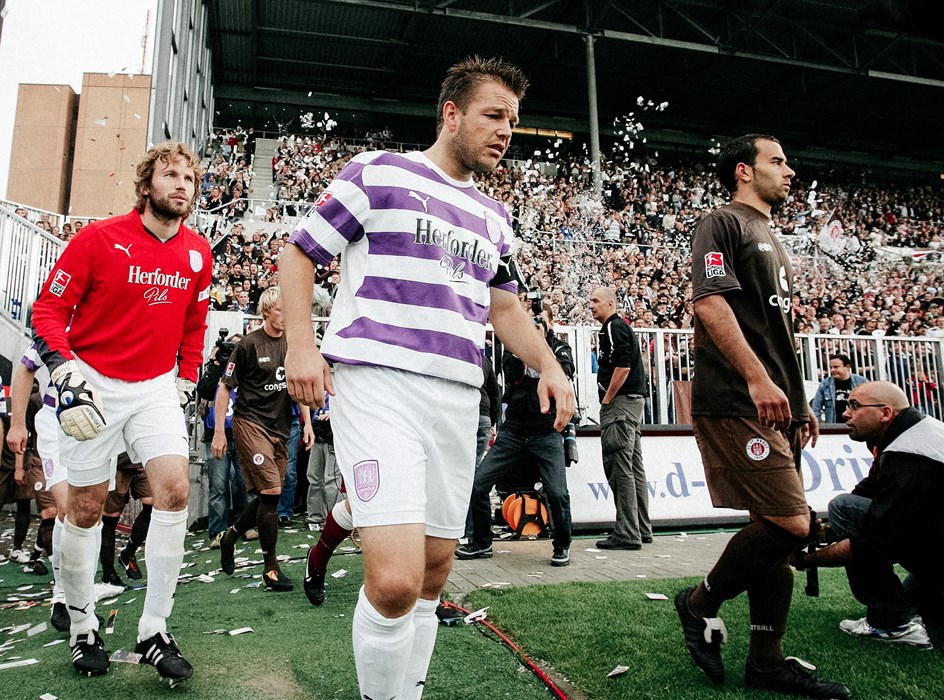 The last competitive fixture against VfL Osnabrück at the Millerntor in summer 2008.

Holstein Kiel are the only team VfL Osnabrück have faced more often in the league than FC St. Pauli. The head-to-head record after 57 meetings is pretty evenly balanced, Osnabrück taking the three points on 21 occasions, 18 games ending in a draw, and St. Pauli winning 18 times. In terms of goals scored/conceded, the Boys in Brown just have their noses in front (95-94). Some time has passed since the last league clash at the Millerntor, however, a 2-2 draw in front of 22,210 spectators on 15 August 2008. Florian Bruns bagged a brace for the Boys in Brown that day.

Sunday's visitors have occupied a range of placings in the table this season, from 17th to as high as third. The only position Osnabrück haven't been in between third and 13th is 12th. Outside the first few matchdays, they made their biggest jump in November when they climbed from 15th to 5th in just four games. The Lower Saxony outfit went eight games without defeat as part of that run, including home wins over VfB Stuttgart (1-0) and HSV (2-1). Daniel Thioune's side sit tenth at the moment, just three points and four goals ahead of FC St. Pauli.

LUHUKAY: "IT'LL BE TOUGH, BUT NOT IMPOSSIBLE"

The games are coming thick and fast in Bundesliga 2 at the moment, with the Boys in Brown back in action on Wednesday already when they entertain FC Heidenheim at the Millerntor (18.30 CET). At the pre-match news conference, head coach Jos Luhukay spoke about...