FC St. Pauli slipped to a narrow 1-0 defeat at SV Sandhausen on Friday evening. Dennis Diekmeier got the only goal of the game with a deflected effort just before the break. The Boys in Brown had several decent opportunities, especially early on and towards the end, but were unable to take any of them.

The Boys in Brown made the better start in front of 1,393 spectators and quickly fashioned some initial chances. First, a free-kick from ex-Sandhausen man Leart Paqarada, who was presented with a jersey for his six years of service before the game, zipped through the penalty area to Daniel-Kofi Kyereh at the back post, but unfortunately he skewed his shot wide. Then, some neat combination play involving Lukas Daschner and Simon Makienok, both of whom were making their first starts, ended with the latter being denied by Martin Fraisl from a tight angle.

Soon after, Christopher Avevor headed a Marvin Knoll cross well over on his 100th second division appearance before Daschner tried his luck from the inside-right right channel. His shot took a slight deflection and flew just wide. Four chances in the first seven minutes! The Boys in Brown were solid at the back and remained the dominant team, but Sandhausen gradually fought their way back into the proceedings and the chances dried up. That changed in the 21st minute, when Kyereh found Makienok in the box with a pinpoint cross. The Dane's header lacked precision, however, and the ball sailed over.

Sandhausen created their first chance of the evening six minutes later when Kevin Behrens backheeled the ball to Julius Biada, but his shot from the edge of the penalty area was too centrally placed to trouble Robin Himmelmann. It was a more evenly balanced affair by this stage and the hosts carved out another opportunity on 36. A long ball from Fraisl arrived at Behrens in the box, but the home side's leading scorer last season (14 goals) fired wide. Sandhausen eventually took the lead on the stroke of half-time. Biada was allowed to go on 50-metre run unchallenged and tee up the advancing Dennis Diekmeier, whose shot from 15 metres was deflected by Daniel Buballa past the stranded Himmelmann. 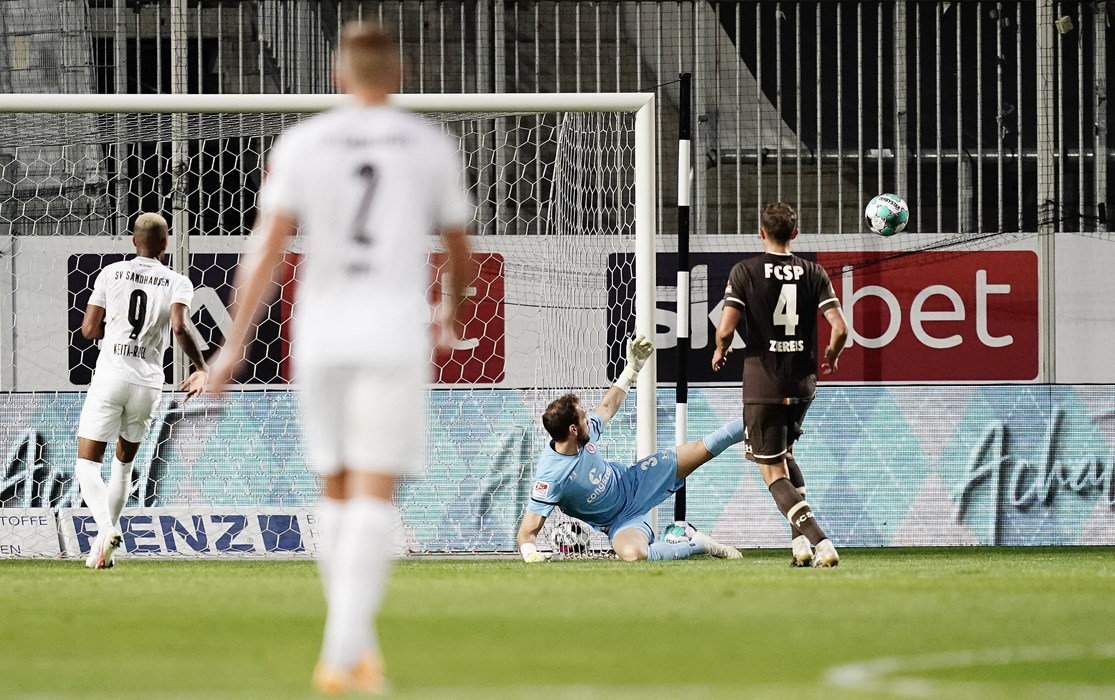 Robin Himmelmann is powerless to stop Diekmeier's deflected effort going in at the near post.

Schultz made two changes for the second half, introducing Maximilian Dittgen and Boris Tashchy for Leart Paqarada and Lukas Daschner. Tashchy was involved almost immediately, but his shot took a decisive deflection off Gerrit Nauber. At the other end, Diekmeier got forward again and tested Himmelmann with a fierce shot from the right corner of the penalty area - the keeper did well to turn the ball over the crossbar. When the corner came in, Aleksandr Zhirov put the ball in the net but the goal was ruled out for a handball offence in the lead-up.

The Boys in Brown increased the pressure, repeatedly seeking to get forward, but had nothing to show for their efforts apart from a distance effort from Knoll that was blocked. With 62 minutes gone, Schultz made another double substitution, throwing on Guido Burgstaller and Jannes Wieckhoff for Simon Makienok and Marvin Knoll. With half an hour to go, there was still plenty of time for prolific marksman Burgstaller and the youngster Wieckhoff, who had impressed against Heidenheim, to help prevent the Boys in Brown from returning to Hamburg empty-handed.

Sandhausen defended with great rigour, however, and gave little away at the back, though they did present the Boys in Brown with a chance from a free-kick in a central position just outside the box after a foul by Ouahim on Tashchy. Kyereh put the ball down, but curled his effort three metres over the crossbar. Sandhausen remained solid at the back, closing down the space in their own half so effectively that Schultz's side struggled to find a decisive gap. Accordingly, it took a set piece to produce a great chance to equalise. A corner ball found its way to Philipp Ziereis, whose shot was blocked, and Sebastian Ohlsson rifled the rebound just over.

With the game entering the closing stages, Schultz beefed up his attack with the addition of Rodrigo Zalazar for Sebastian Ohlsson and the Boys in Brown stepped up another gear. Ziereis dispatched a long ball in behind the home back four, allowing Burgstaller to pull the trigger from the inside-right position. The angle was a little too tight, however, and his shot lacked power. Zalazar then whipped a cross in for Ziereis to head over before angling a shot towards goal that took a slight deflection and fizzed just past the post. The closest the Boys in Brown came to an equaliser was in the 89th minute, however, when Wieckhoff was teed up by some neat passing play involving Dittgen and Kyereh, only to see his left-foot shot miss the far post by a whisker.

The Boys in Brown rallied one more time in the last few minutes but were unable to ward off the 1-0 defeat. In contrast to the 4-2 home win over Heidenheim, when the Boys in Brown took their chances with clinical efficiency, this time they lacked the necessary precision and resolve.