FC St. Pauli signed off into the winter break in impressive fashion on Saturday afternoon, deservedly seeing off the challenge of table-toppers Arminia Bielefeld by three goals to nil in front of a sell-out crowd at the Millerntor. Henk Veerman gave the Boys in Brown a two-goal lead at the break in the face of some fierce resistance by the visitors before Viktor Gyökeres added a third on 54 minutes.

Head coach Jos Luhukay made one change to the side that beat Wehen Wiesbaden last week, fit-again Daniel Buballa slotting into central defence alongside Leo Østigård in place of Marvin Knoll. After a scoreless draw at Heidenheim, his opposite number, Uwe Neuhaus, saw no reason to change a team who were unbeaten away from home (7 wins, 2 draw) going into the final game of the year.

The two teams had drawn 1-1 on the opening day and wasted no time getting going in the bright sunshine. And it was Jos Luhukay's side who made the perfect start, taking an early lead with their second corner of the game in the third minute! Christopher Buchtmann and Waldemar Sobota played it short, and the latter's cross was nodded past the helpless Stefan Ortega Moreno and into the far corner by Henk Veerman.

Arminia immediately upped the tempo and Fabian Klos directed a volley narrowly past the post with four minutes on the clock. Two minutes later, Jonathan Clauss fired wide from distance and was then just beaten to the ball by the onrushing Himmelmann. After a brief respite, Buchtmann had a great chance to double his side's lead. Veerman sent Ryo Miyaichi on his way and he found the advancing Buchtmann with a neat cutback, but the midfielder got underneath it and his shot flew over the crossbar.

The visitors enjoyed the lion's share of the possession but were unable to find a way through a rock-solid St. Pauli rearguard. And the Boys in Brown continued to carry a threat going forward, as in the 26th minute when Buchtmann picked out Viktor Gyökeres on the left. The Swede saw off the challenge of Amos Pieper and delivered a perfect cross to Veerman, who was a shade quicker to the ball than Joakim Nilsson and sidefooted first time into the net to make it 2-0.

Stung by those two early strikes, the league leaders laid siege to the St. Pauli goal and carved out a number of chances. Himmelmann gathered a 30-metre free-kick from Andreas Voglsammer before the same player rifled a shot narrowly past the post. Marcel Hartel then tried his luck from the edge of the box after three stepovers, but Himmelmann made another comfortable save before tipping a long-range effort from Florian Hartherz over the bar for a corner.

The Boys in Brown carved out a chance of their own on 41, Finn Ole Becker striking a free-kick just over the bar, but had a narrow escape two minutes later when Joan Edmundsson knocked the ball in for Klos, who couldn't get his feet right, however, and screwed his effort well off target. 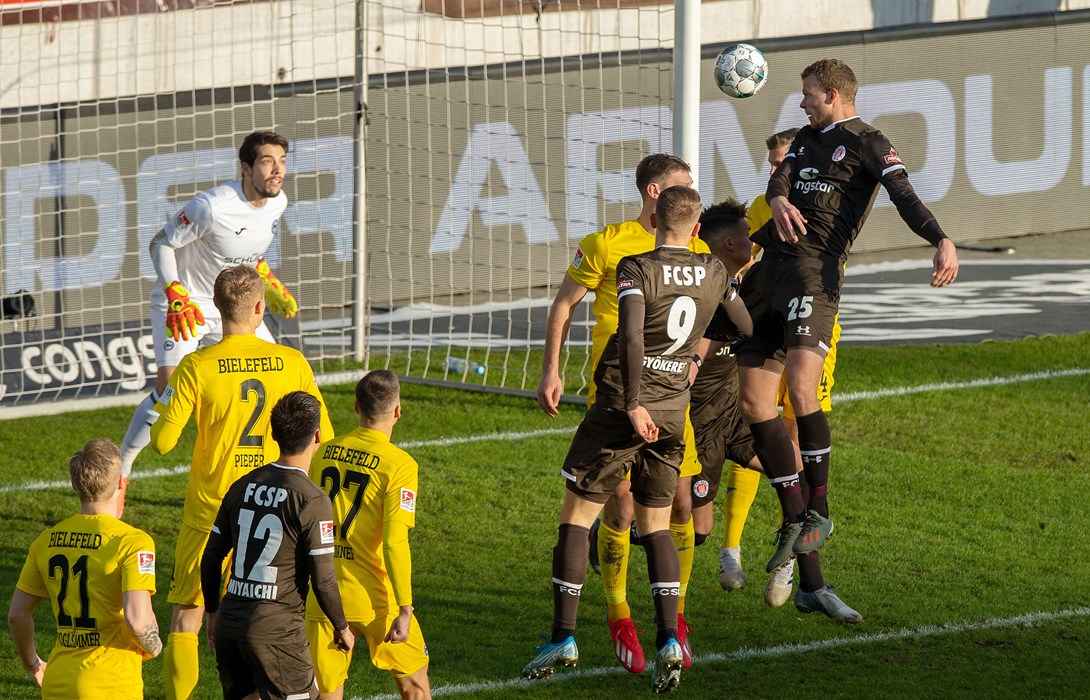 Henk Veerman heads his side into the lead with just three minutes gone.

Both teams emerged unchanged for the second half and the pattern remained the same on the pitch, too. The visitors came flying out of the traps in a bid to reduce the deficit but were unable to trouble Himmelmann early on. Six minutes in, Luhukay was forced to make a change, however, as Daniel Buballa was unable to continue. He was replaced by Philipp Ziereis.

The central defender had only been in the action a few minutes when the Boys in Brown were celebrating again! Sobota knocked a long ball out wide to Miyaichi, who left Hartherz for dead before cutting the ball back for Gyökeres to sweep a low drive into the far corner. At the other end, the impressive Himmelmann denied the visitors yet again. Nilsson directed a free-kick back into the middle for Klos to head towards goal from close range, only for Himmelmann to stick out a foot and make the save.

It could have been 3-1, but then it was almost 4-0. Miyaichi did brilliantly yet again to escape the attentions of Hartherz, but Ortega Moreno produced a smart reflex save to thwart the Japan winger. Arminia coach Neuhaus responded by throwing on fresh legs in the shape of Reinhold Yabo and Cebio Soukou for Edmundsson and Clauss on 62', and Luhukay followed suit three minutes later, introducing Johannes Flum for Buchtmann.

Bielefeld continued to push forward with all they had but the Boys in Brown matched their attacking exploits with some spirited defending to keep them at bay. Luhukay's side also took advantage of the space that was opening up to launch the odd counterattack themselves, as in the 71st minute, when after an extended passing move the ball ended up with Becker, who banged a low shot just wide of the post from distance.

In the closing stages the Boys in Brown kept the visitors quiet – with the exception of a Voglsammer piledriver that smacked back off the post on 87 and a Hartherz free-kick that curled just wide on the stroke of full-time – and saw the game out to seal a deserved 3-0 victory. The visitors remain top of the table despite suffering their first defeat on the road this season, while Jos Luhukay's side go into the winter break four places better off in 11th thanks to their second home win on the bounce.