Head coach Jos Luhukay rang the changes in his starting lineup. Young talent Moritz Frahm made his first appearance during this training camp, while Matt Penney returned to the side after a 77-day injury layoff. The game was a high-octane affair from the off with chances at both ends. Bielefeld created more openings before the first interval and eventually went ahead on 29 minutes when Florian Hartherz met a delivery from Clauss at the far post and guided the ball past Robin Himmelmann.

It took a while for the game to get going again after the two sides had changed ends for the first time on 30 minutes. Arminia continued to apply the pressure and extended their lead on 47 when Amos Pieper knocked a long ball to Fabian Klos, who controlled it in textbook fashion and found a finish. The Boys in Brown refused to let their heads drop, however, and when Christopher Buchtmann squared the ball to Gyökeres in the penalty box just a few minutes later, the 21-year-old wasted no time in bending a shot into the net to halve the deficit. 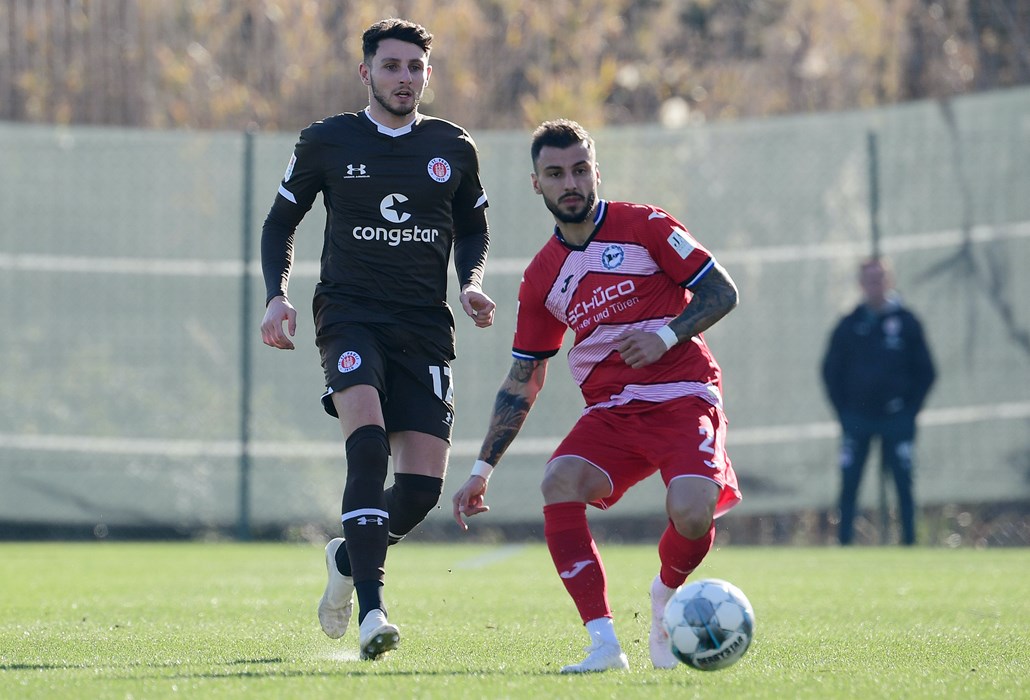 Matt Penney made his first appearance since 2 November.

Both teams fielded completely different teams for the second 60-minute period. Bielefeld found their feet quickly and restored their two-goal advantage when Müller could only parry Soukou's shot and Staude tidied up to make it 3-1. Again, the response wasn't long in coming, Luis Coordes and Waldemar Sobota combining to pick out Ryo Miyaichi, who reduced the deficit to one again. Ryo continued to charge and in the 81st minute was teed up in the box by Boris Tashchy. With just goalkeeper Linnér to beat, the Japanese midfielder kept his cool to level things up at 3-3.

The two teams changed ends for the final time with 90 minutes gone. Double goalscorer Miyaichi was given the rest of the game off. His place in attack was taken by Dimitrios Diamantakos for the final half an hour. In this phase of the game the action slowed down a little. Both sides had the odd chance from free-kicks. Ultimately, their attacking efforts lacked precision and it looked to all intents and purposes as if the game was going to end in a fair share of the spoils. Bielefeld, however, had one last trick up their sleeve. Consbruch won the ball and slipped it through to Staude, who bagged his second of the day with a crisp drive to secure Arminia a 4-3 win.

Head coach Jos Luhukay: "We saw two totally different halves today. In the first 60 minutes we gave the ball away too many times early on, so our transitional play never really got going. We created two or three good opportunities before Klos scored their second and Viktor got us back in in the game with a super goal. In the second half we were very good in the first half an hour and had some good chances, but as the second half wore on both teams lost their way a bit with a lot of possession changing hands and no real chances. Obviously, we can't be letting go of the draw so close to the end, but I'm not dissatisfied all in all. I think the players had another chance to show what they can do today, and we took some good insights from the game to turn the focus to the game against Greuther Fürth."