FC St. Pauli were held to a 1-1 draw by Arminia Bielefeld as Jos Luhukay made his bow as head coach. Fabian Klos opened the scoring on five minutes for a Bielefeld side who dominated the first half. Ryo Miyaichi levelled just after the restart, and though they went on to gain the upper hand, the Boys in Brown had to settle for a point. In view of the first half, however, the draw was a fair result.

Jos Luhukay was without no fewer than eight players for his debut appearance on the touchline after the long-term absentees were joined on the injury list by Christopher Avevor (groin) and Daniel Buballa (cold) during the week. Robin Himmelmann reported in fit again, however, and replaced Svend Brodersen in goal. Jeremy Dudziak stepped in for Buballa at left-back, while Florian Carstens moved into central defence from right back in place of Avevor. YiYoung Park slotted into the vacant spot on the right of the back four. Captain Johannes Flum replaced Marvin Knoll, who began on the bench, and Christopher Buchtmann dropped back alongside Flum, allowing Sami Allagui to play off the shoulder of Alex Meier. Finally, Ryo Miyaichi started on the right flank in place of the injured Waldemar Sobota (ankle sprain).

The Boys in Brown made a bold start, pressing the visitors high up the field, but quickly found themselves a goal down. Park misjudged a long ball forward and, in an attempt to clear the danger, made contact with Andreas Voglsammer. Referee Sascha Stegemann pointed to the spot and Fabian Klos sent Himmelmann the wrong way, slotting the ball into the bottom right corner. The goal was doubly disappointing from the home point of view, however, as the foul took place a good 30 centimetres outside the area.

Bielefeld threatened again with a training-ground corner on ten minutes, Jonathan Clauss forcing Himmelmann to punch the ball clear with a first-time volley. The Boys in Brown registered their first shot on goal after 13 minutes in the shape of a distance effort from Allagui that flew wide of the target. Luhukay's side stuck to their plan of attacking the visitors inside their own half, but when in possession themselves lacked precision in the final third.

Midway through the first half, the visitors created two chances in relatively quick succession. Dudziak charged down a Clauss effort on 21, and then Himmelmann dived low to his left to keep out a shot from Voglsammer. At the other end, Buchtmann tested Stefan Ortega from just outside the box. Bielefeld remained the better side, partly because the Boys in Brown continued to lack punch going forward, as demonstrated six minutes before the interval by Miyaichi, who dallied too long on the edge of the area, allowing a defender to get a block in.

The closing stages of the first period belonged to the visitors. Voglsammer headed over completely unmarked following a well-worked counter and then Himmelmann was out of his goal smartly to block the attempted dink by Clauss. Finally, another quick break by the visitors two minutes before the interval was defused when Carstens nipped in to clear a ball in from Klos with Reinhold Yabo waiting to pounce. 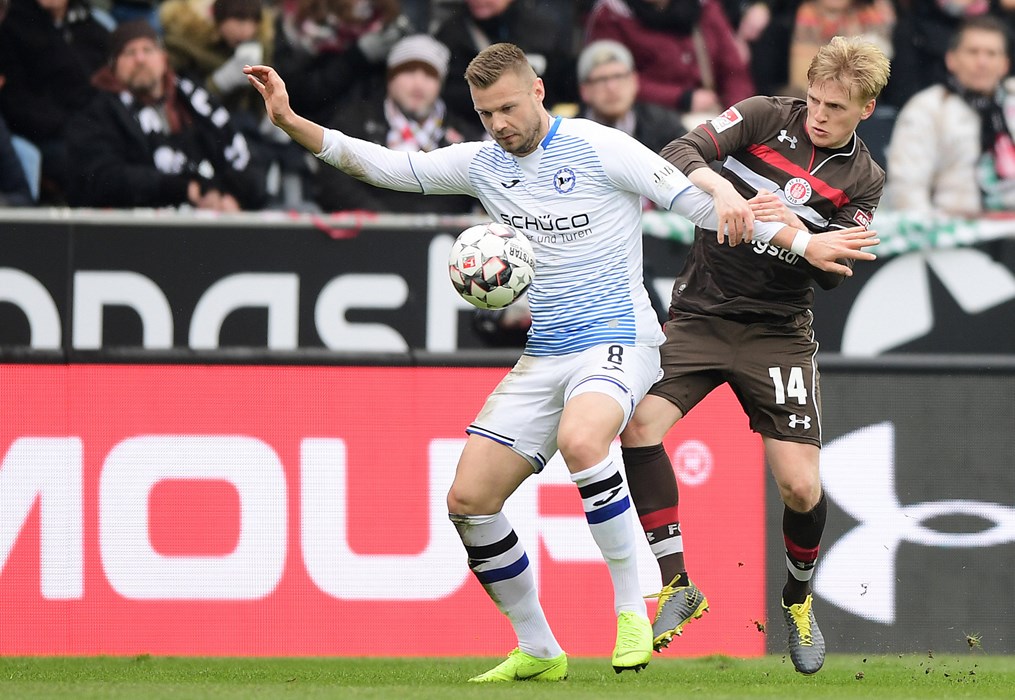 Luhukay opted to change things round at half-time, throwing on Marvin Knoll for Møller Dæhli and switching from a 4-2-3-1 formation to a 4-1-4-1. The introduction of Knoll was to pay off almost immediately, as a neat passing move in the 48th minute ended with Miyaichi heading Knoll's cross into the net off the inside of the post to restore parity.

The Boys in Brown were well in the game now, but Arminia continued to dictate the possession, without ever threatening. It was high-octane stuff, with both sides flying into the tackle and fighting for every ball. Chances remained a rarity, however, as the final pass was often lacking. As the game wore on, the Boys in Brown increasingly gained the upper hand. With a quarter of an hour left, Luhukay intervened by making a second substitution, introducing Kevin Lankford for the injured Allagui.

Within two minutes the Boys in Brown had fashioned a great opportunity to take the lead. After a move involving Knoll, Meier and Buchtmann, the ball reached Miyaichi in the inside-left channel. The midfielder ghosted past his marker and pulled the trigger from eight metres, only to be denied by a fine stop from Ortega. Soon after that, Miyaichi knocked a ball into the box for Buchtmann to shoot, but his effort was blocked. Moments later, Buchtmann drilled a shot from range straight at the Bielefeld keeper.

In the 87th minute, Miyaichi made way for Finn Ole Becker and the Boys in Brown rallied for one last effort. Justin Hoogma went up for a corner just before the end of regulation time and met the inswinger with his head, only to see the ball zip a metre over the crossbar.