BOYS IN BROWN HELD BY BOCHUM

The Boys in Brown shared the points with VfL Bochum in a 1-1 draw on Friday night. In a match that was particularly lively in the first half, Bochum took the lead on five minutes with a goal from Simon Zoller, but Waldemar Sobota levelled five minutes later. The Boys in Brown had more of the game in the second half but missed out on the fourth home win of the season.

For the third home game in ten days, head coach Jos Luhukay made three changes to the side that drew 2-2 against Karlsruher SC. Luca Zander, Finn Ole Becker (both on the bench) and Matt Penney (injured) made way for Sebastian Ohlsson, Philipp Ziereis (first start since December 2018) and Viktor Gyökeres. Bochum coach Thomas Reis made two changes after the 3-1 home win against FC Nürnberg: Stefano Celozzi (injured) and Manuel Wintzheimer (bench) were replaced by Jordi Osei-Tutu and Silvere Ganvoula, who returned after a one match ban.

In front of a sell-out crowd at the Millerntor, the visitors made the brighter start and their first chance came after just 26 seconds. A low cross from Ganvoula was hit wide by Danny Blum from ten yards out. At the other end, Waldemar Sobota went even closer to scoring. His shot from 15 yards out hit the left upright and was just inches away from securing the lead on four minutes. Back to the other end where the visitors clinically exploited their second chance. A whipped-in cross from Blum found Simon Zoller. His shot from just outside the six-yard box nestled in the bottom corner of the net – 1-0 down on five minutes.

There was end-to-end action and the Boys in Brown made the most of their second goalscoring opportunity. A good move involving several players ended with Mats Møller Dæhli passing to Sobota. Sobota beat a defender, teed the ball up on the edge of the box and slotted it into the bottom left corner – 1-1 on 10 minutes. There was no sign of boredom at the Millerntor and the next disquiet in the crowd came when Anthony Losilla headed a cross from Danilo Soares against the outside of the post (16').

After a lively start to the game with opportunities at both ends, there were no more goals, but the match was still exciting because of the high tempo of the game and the fact the next chance could happen at any time. It took a while before the busy Sobota won the ball, left an opponent standing and shot with his weaker left foot. The ball flew past the left-hand post (28'). Shortly after that, Ohlsson shot from nearly 30 yards out. The ball turned towards the goal but in the end was well wide (31').

The Boys in Brown were on top at this point and came close to scoring. A Sobota corner found Leo Østigård unmarked eight yards out but Manuel Riemann pulled off a reflex save to prevent the hosts making it 2-1 (33'). The visitors remained dangerous with Danilo Soares having a chance after a one-two with Zoller. His shot was deflected and thus posed little threat as the ball flew wide of the far post (37'). That was the final action of note in a very entertaining first half. 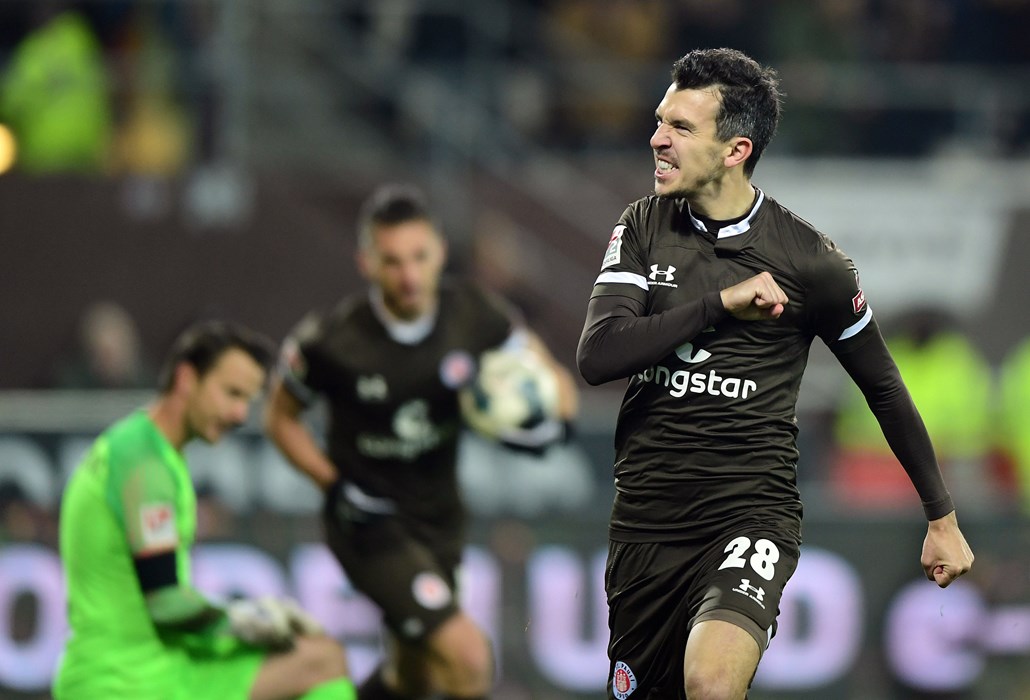 Waldemar Sobota, who posed the greatest threat on goal for the Boys in Brown in the first half, celebrates his leveller at 1-1.

There were no changes at half-time. As in the opening 45, the visitors were on the front foot first. A cross from Chung-Yong Lee was mishit by Ganvoula, leaving Robin Himmelmann with an easy save (46'). Then it was the turn of Luhukay's side. A corner from Sobota was headed over the bar by Ziereis (51'). Both teams continued to fight hard but there was little to report early in the second half.

Excitement came after one of several corners for the Boys in Brown: Østigård was a bit quicker to the ball than Danilo Soares and ended up on the deck. The Boys in Brown wanted a penalty but referee Florian Badstübner did not see the challenge as a foul (55'). The Boys in Brown had more of the game and continued to press. Gyökeres, playing on the left flank, shot from the corner of the box but a slight deflection took the ball past the far post (63').

Dimitrios Diamantakos had a chance to make it 2-1 in the middle of the second half but Riemann was able to save with his feet. At the other end, Lee was left on the ground after a challenge with Østigård but Badstübner again decided not to award a penalty (67'). Jos Luhukay then made the first changes: First, Marvin Knoll came on for Møller Dæhli (68') and then Henk Veerman replaced Diamantakos (73').

With 15 minutes to play, Lee put the ball in the box and found Losilla. Bochum's captain failed to connect properly and put a shot well wide of the target (77'). Himmelmann was then tested in a one-on-one with Lee and prevented his side from going behind with an impressive save with his feet (78'). At the other end, Ohlsson again shot from the outside the box but the ball ended up in the away end (86').

A foul on Knoll resulted in a free kick 22 yards out directly outside the middle of the Bochum penalty area. Knoll and Sobota stood over the ball. Knoll took charge and his effort curled just wide of the goal instead of ending up in the back of the neck for the winner (89'). It just wasn't to be and after two minutes of added time, Badstübner ended the game and the Boys in Brown had to settle for a point.