FC St. Pauli beat SønderjyskE Fodbold by the only goal in their final pre-season warm-up game on Sunday. Borys Tashchy struck in the 29th minute to see off the Danish cup winners at a regrettably empty Millerntor Stadium.

Head coach Timo Schultz went with Robin Himmelmann in goal and a back three consisting of Philipp Ziereis, Christopher Avevor and Daniel Buballa for the visit of SønderjyskE Fodbold. Sebastian Ohlsson, Maximilian Dittgen, Marvin Knoll and Afeez Aremu lined up in midfield, with Daniel-Kofi Kyereh partnering Borys Tashchy up front.

The game got off rather frenziedly. With the start of the campaign just a few days away, both teams looked determined to end pre-season on a positive note. So it was a high-intensity affair in the opening stages, though neither team was able to mount a threat in the penalty box until the 16th minute when Dittgen was sent on his way by a nice pass from Daschner on the left. His angled drive from just inside the box was defused by Lawrence in the SønderjyskE goal, however.

That chance was the signal for the Boys in Brown to take control of the proceedings, and while the action gradually switched to the visitors' half, they were initially unable to carve out any opportunities of note. After a brief respite for the Danish side, however, Tashchy eventually opened the scoring for Timo Schultz's charges on 29 minutes. The goal was the product of a nice but simple one-two involving the goalscorer and Kyereh in the penalty box that culminated with Tashchy netting at the near post from the inside-left channel.

The Boys in Brown continued to keep a good shape after taking the lead, albeit from a slightly deeper position, as the Danish visitors bumped up their share of possession without finding a way to unlock the defence. That very nearly changed in the 42nd minute, however, when they worked an opening with some neat passing play into the danger area. Fortunately, Dittgen had tracked back and was able to prevent an equaliser at the last moment. That was to prove the last of the action and the referee blew his whistle on the dot to end the first half. 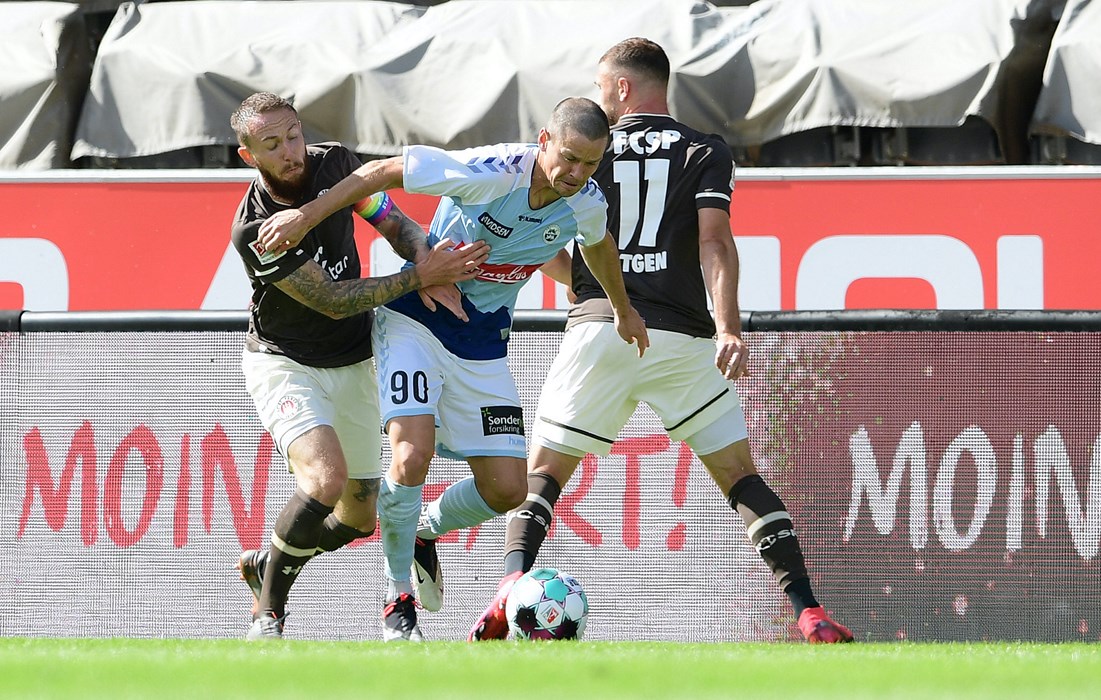 Marvin Knoll and Maximilian Dittgen had a firm grip on things.

Schultz made one change for the second half, handing Simon Makienok in his first runout for the club in place of Daschner. The striker had the first opportunity for his team on 49, but his header from Dittgen's superb cross from the left smacked against the far post. Soon after that, Makienok turned provider for Ohlsson, who was denied by Lawrence from close range.

Six minutes later, the Boys in Brown fashioned another chance to double their advantage. This time it was Kyereh who was denied by Lawrence from close range following a decent piece of pressing. Schultz then opted to make five changes at once, Aremu, Avevor, Tashchy, Ziereis and Buballa making way for Leart Paqarada, Rodrigo Zalazar, Rico Benatelli, Marvin Senger and Jannes Wieckhoff. Paqarada then picked out Kyereh with a neat pass in the 76th minute, and his shot flew just wide of the right-hand upright. With the game entering the closing stages, Luca Zander and Ersin Zehir replaced Dittgen and Ohlsson. The game didn't simply peter out, however, and four minutes from time Paqarada let fly from distance following a corner, forcing Lawrence into a fingertip save to keep it at 1-0. But then it was all over and the Boys in Brown were left to celebrate another pre-season victory.