The second division is currently on hold due to the first international break of the season, giving the Boys in Brown two weeks to prepare for the home derby against HSV. Dimitrios Diamantakos has been in the goals recently and had been hoping for a return to the Greece squad, but is happy to be spending the run-up to the derby with his teammates instead. The striker is looking forward to the return to fitness of Borys Tashchy and Henk Veerman and also hoping for more assists from Mats Møller Dæhli.

Hamburg instead of Helsinki. The Kollau training ground instead of the Olympic Stadium in the Finnish capital. Training with his teammates instead of playing for the national team. While Greece were preparing to take on Finland in a European Championship qualifier, Dimitrios Diamantakos was working with his teammates on the training ground back in Hamburg. An impressive run in front of goal that has seen him score four goals (including one in the DFB Cup) this term, following on from three in the last four games last season, was not enough to earn him a call-up.

"I wanted to put myself in the running for a call-up with some good performances and that's what I did," said Diamantakos, who was last named in the Greece squad for the World Cup play-offs against eventual runners-up Croatia. "But the coach decided otherwise, and I have to accept that. I'll continue to do my best and maybe I'll be selected next time." There is a positive side to not being called up, however, as the striker was keen to point out: "It means I can prepare with the rest of the lads for the derby, which is a crucial game, instead of coming back just for the last three days."

With ten days to go before the derby, Diamantakos says he is already fired up for the game. After securing a scoreless draw in the opening meeting last season, which the striker feels could have been turned into a win in the closing stages, the Boys in Brown slumped to a 4-0 defeat at the Millerntor in the reverse fixture. Diamantakos was in the starting lineup for the first game but an unused substitute for the second, having only just returned to the squad following a muscle strain. He then made a brief appearance in the next game at Sandhausen, only to suffer another muscle injury. Since late April, however, the striker has started every game. 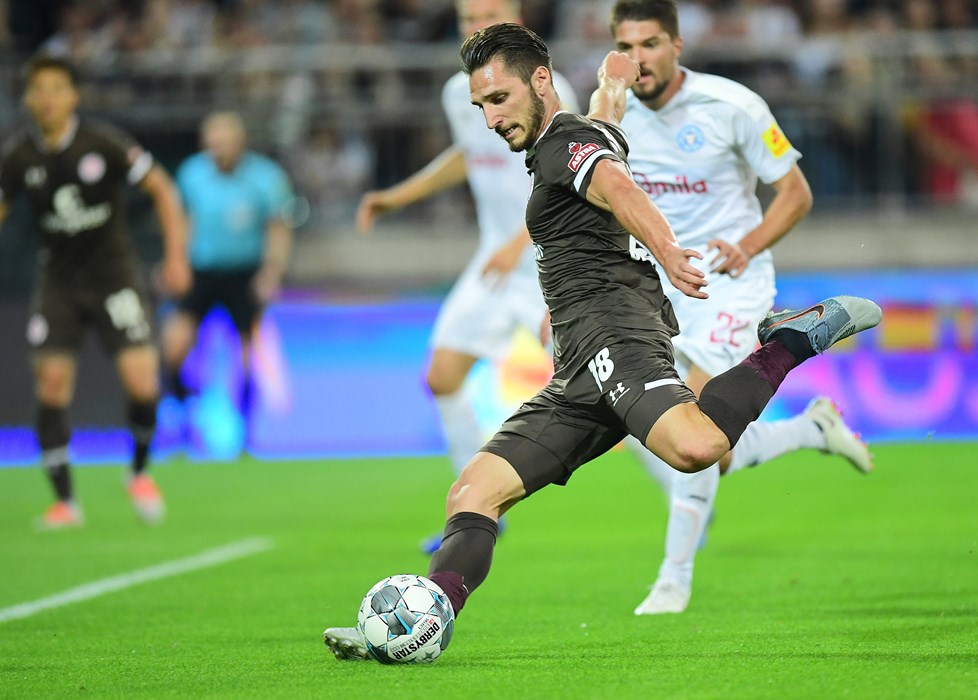 Dimitrios Diamantakos only has eyes for the ball against Holstein Kiel.

The fleet-footed striker is benefiting from the fast attacking style introduced by Jos Luhukay and has scored seven times in his last ten competitive appearances for the Boys in Brown. "I always said the goals would come when I was fit again and playing regularly," said the striker, who despite being pleased with his personal tally feels the points haul this season could be better. "Our performances have been good and should have brought us more than just the five points so far. As a team, we need to be more alert in the closing stages of games. That lack of focus saw us drop a number of points at Bielefeld, Stuttgart and Dresden," said Diamantakos, who bagged a brace in the disappointing 3-3 draw at Dresden.

Five matches into the new campaign, the striker boasts the fourth-highest chances-to-goals ratio in the league (three goals from 12 attempts equates to a strike rate of one in four). His return to fitness after missing half of the second part of last season with injury is also reflected by other stats. The striker is not one to shirk a challenge and a total of 137 duels in the first five matches puts him top of the internal rankings in this category. He also leads the way in sprints (126).

His pass success rate of 86 per cent is also excellent for a striker. Eighty of his 93 passes have found their intended target, the best return among the ten leading scorers in the second division this term. And Diamantakos is happy to give his teammates some of the credit for his impressive completion rate: "It's good but the reason it's so positive is because our movement is good and there are always one or two lads available as outballs." 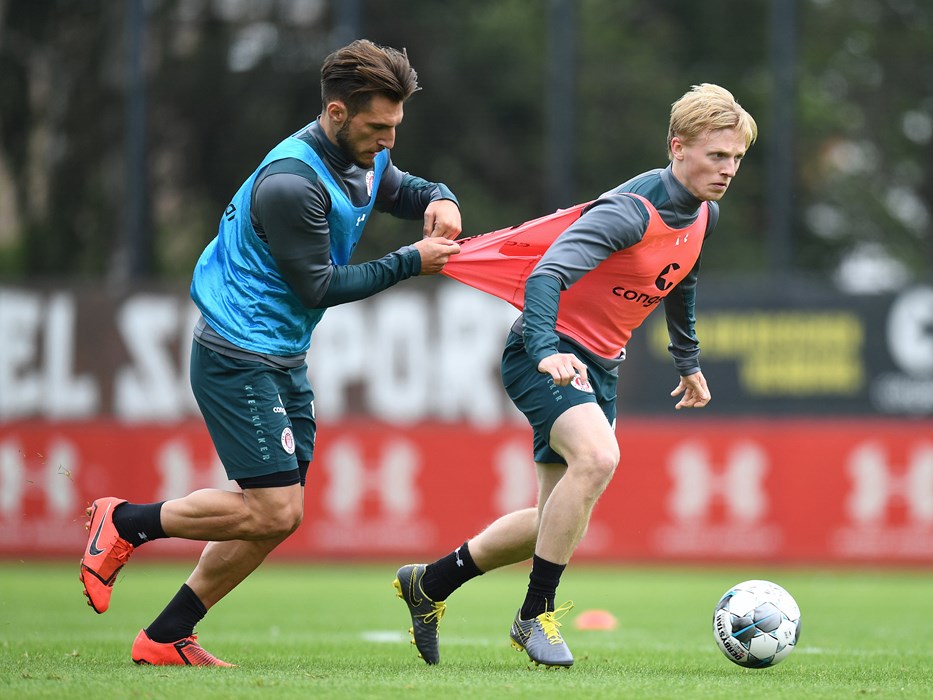 Dimitrios Diamantakos and Mats Møller Dæhli occasionally find themselves on opposite sides in training.

Diamantakos has excelled at offering an outball himself this season, with Mats Møller Dæhli picking him out with reassuring regularity. The Norway midfielder has made all of the striker's last three goals. "A few weeks ago, I told Mats I would definitely stick the ball away if he gave it to me and he's done that very well," said Diamantakos with a grin. "I hope he can give me a lot more assists. That'd be good for me, good for him and good for the team."

The competition in the squad is another thing that is good for the team. Diamantakos was the only fit striker for much of pre-season until the arrival of Viktor Gyökeres just before the opening day. Henk Veerman and Borys Tashchy are being eased back into full training and will fire up the battle for places on their return. "The more fit players we have, the better it is for the team. I'll be delighted when Borys and Henk are back. Whoever's best should play because the best player also makes the team better."