Decent performance but no joy at Dresden

FC St. Pauli lost 2-1 at Dynamo Dresden in the penultimate away game of the season on Friday night. Patrick Ebert opened the scoring for the hosts with a disputed first-half penalty, with Dimitrios Diamantakos levelling the scores after the restart. Dzenis Burnic netted the winner for Dresden with a quarter of an hour left.

As enjoyable as the 4-3 home win against Jahn Regensburg was, it was also painful in several ways. For in addition to the usual long-term casualties, head coach Jos Luhukay had to do without Christopher Buchtmann (groin), Marvin Knoll (abdomen) and skipper Johannes Flum (Achilles) plus Florian Carstens (ankle), who started on the bench. In Finn Ole Becker, who was making his full debut after serving a one-match ban, Jan-Philip Kalla, back from a calf injury, plus Daniel Buballa and Sami Allagui, who started on the bench last week, Luhukay fielded four new starters.

An almost sell-out crowd at the Rudolf Harbig Stadium saw a high-intensity start with few chances early on. The Boys in Brown repeatedly won possession with their pressing game, but the final ball lacked precision. Dynamo created the first chance in the 12th minute when Eric Berko was put through up front. Robin Himmelmann had no problem saving the rather tame effort, though. At the other end, Jos Luhukay's side mounted a swift counter attack that ended with a Ryo Miyachi shot from the edge of the area being saved by the keeper.

The match burst into life on 20 minutes when Kalla blocked a volley from Patrick Ebert first with his body and then with his left arm, whereupon referee Robert Kempter awarded a penalty. After Kalla showed Kempter the imprint of the ball on his upper body, the official took time out to reconsider the decision and seek advice. Unfortunately, he stuck to his guns and Ebert converted the spot kick to make it 1-0 to Dynamo. Himmelmann went the right way but was unable to stop the powerfully placed shot.

Five minutes later the Boys in Brown suffered another setback when Miyaichi had to go off with an ankle injury following a challenge with Ebert. He was replaced by Ersin Zehir. The next chance came when Justin Hoogma hit a free-kick that was headed for the top corner until Wiegers lifted his fists to make the save. Just before the break, it was Himmelmann's turn to demonstrate his ability from a corner to deny Jannis Nikolaou from close range, diverting the ball onto the bar with an impressive reflex save. Zehir then had a shot saved by Wiegers, leaving the Boys in Brown to go in at half-time 1-0 down. 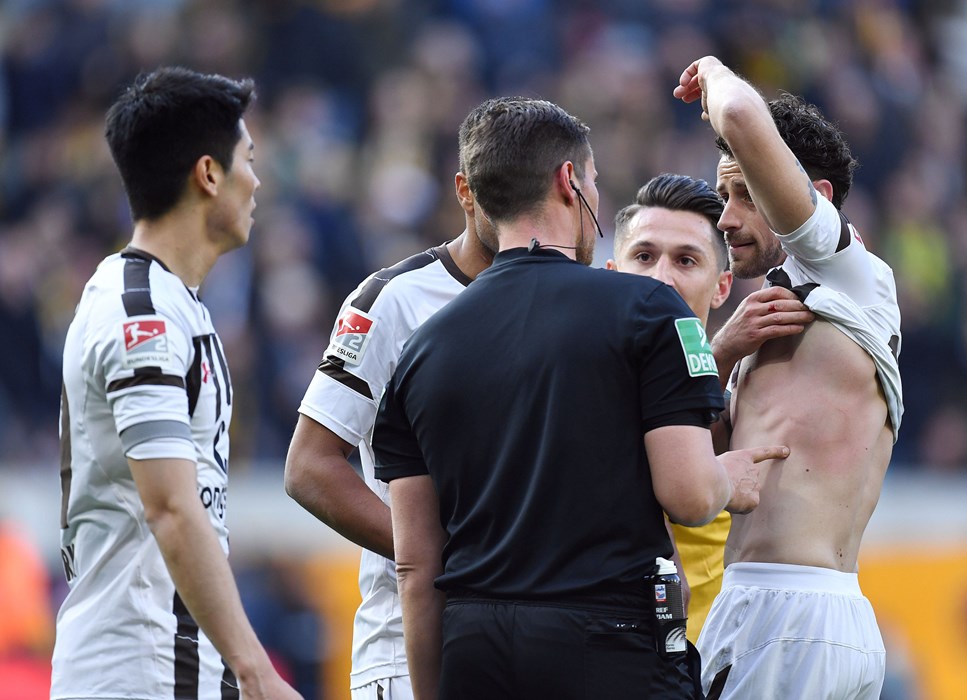 Jan-Philipp Kalla shows referee Robert Kempter the mark left by the ball on his upper body.

The two teams came out for the second half unchanged. Luhukay's charges had to step up a gear but the home side stood firm and were able to contain them. Dynamo looked to break quickly on winning possession but Kalla managed to prevent Berko from getting a shot in on 51. At the other end, Jeremy Dudziak tried his luck following a decent move down the left, but Wiegers was able to hold on.

Four minutes later, however, there was nothing Wiegers could do. Becker slotted the ball through to Zehir, who knocked it on to Dimitrios Diamantakos. The striker rounded the keeper before rolling the ball into the net to level the scores. Luhukay's team were in the ascendency now and created the next chance. Dudziak combined his way down the left with Zehir as far as the penalty area but his square ball to the unmarked Allagui was cleared by Nikolaou.

There was little goalmouth action of note in the ensuing period and a series of interruptions ensured the tempo subsided. Nevertheless, the match remained an exciting affair, as neither side was willing to settle for a draw. And with the game entering the final 15 minutes the home side regained the lead. After winning the ball in midfield, Burnic advanced to the penalty area and played a one-two with Koné before shooting from 12 metres. The ball took a deflection off Hoogma, and Himmelmann could only look on as the ball flew into the net.

In a desperate attempt to salvage a point, the Boys in Brown upped the tempo. Mats Møller Dæhli pushed forward towards the Dynamo goal but his 20-metre drive sailed just over the bar. Luhukay responded by making a double substitution with nine minutes left, Alex Meier and Kevin Lankford replacing Allagui and Dudziak. His side rallied one more time but unfortunately it was not enough, and the game ended in a 2-1 defeat.

"WE LACKED COMPOSURE" - THE POST-MATCH REACTION

The Boys in Brown were understandably unhappy with their performance after the 3-0 reverse at Greuther Fürth on resumption of the league campaign, even though the margin of defeat was too high in their view.

After an absence of just over five weeks, the second division is back! Jos Luhukay's side resume their league campaign at Greuther Fürth on Tuesday evening (20:30 CET) aiming to carry on where they left off before the winter break, when they beat Wehen Wiesbaden 3-1 to end their barren run before signing off with an impressive 3-0 win over league leaders Arminia Bielefeld.