FC St Pauli are a hugely popular German team who were formed in 1910, and spent the majority of their years in the lower leagues of German football.

Credit: This article first appeared on the website of CLICKON SOCCER

In 1963 the Bundesliga was formed and in 1974 due to the success of the new top division, a new league was formed, the 2. Bundesliga. FC St Pauli were part of the new second tier and finally in 1977 they won the league and were promoted to the top division for the first time in their history. However they found themselves relegated at the end of the season after just one season in the Bundesliga.

Things went from bad to worse for the club as they battled with financial turmoil. Eventually being denied a license due to being on the verge of bankruptcy. FC St Pauli found themselves in the Oberliga Nord (III). After four years of financial uncertainty they recovered and were promoted to 2. Bundesliga. Finally, the club were back.

It was around this time that the club had become a ‘kult’ club. Having used the location of their ground – situated in the centre of the city night life and red light area – to their advantage, suddenly they were attracting a different type of fan. The new type of supporters took on the skull and crossbones symbol as their own unofficial emblem, with the majority of the supporters seeming far left in their political views. The Skull and Crossbones symbol signifies the poor against the rich, like pirates fighting for the poor against the rich. It may sound crazy but it works for the FC St Pauli fans. 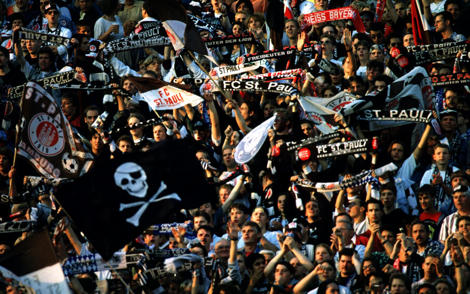 St Pauli with their new brand of supporter, became the first team to officially ban right wing nationalists activities in the stadium. This was a massive step for the club when football hooliganism was at its highest and often caused clashes with other sets of supporters.

Over the next 10 years the club continued to yo-yo from the top division. Their best run in the Bundesliga was from 1988-91 spending three seasons before again, finally being relegated to the 2. Bundesliga.

They once again gained promotion to the Bundesliga after finishing a creditable third. But that season was a struggle and another downward spiral for the club. Having been relegated again and finishing bottom, the team started to break up. Players and coaches left and in 2002/3 they were relegated to the Regionlliga Nord (III). The club once again faced financially turmoil.

The club embarked on major fund raising events in an attempt to keep the club afloat. Then in 2005/6 the club went on a fantastic run in the DFB Cup. They beat Burghausen, Bochum and Hertha Berlin. Then faced Werder Bremen in the quarter finals, beating the Bundesliga club 3-1. Their brilliant run came to an end after they faced Bayern Munich in the semi-final and were soundly beaten 3-0. But more importantly for FC St Pauli, was the one million euros they received along the way in TV and sponsorship money, saving the club from further financial problems.

The team gained promotion to 2. Bundesliga in 2006/7 finishing as winners. Then followed two seasons of consolidation before finishing runners-up and once again playing in the top tier of German football.

However after another disappointing season they finished 18th and once again found themselves relegated. This, disappointedly, is where they have stayed for the last five seasons. Still, the Bundesliga needs St Pauli, it needs the passion of the fans and their crazy support from all around the globe.

One things for sure, the fans are as passionate as they come. They pride themselves on being anti-racist, anti-homophobic and anti-sexist. Which can sometimes lead to upsetting fans of other clubs. For a football team and their supporters taking this type of stand is something unheard of in the modern game. Maybe this is something that other teams can learn from.

The club has roughly 11 million fans world wide. They are one of the most recognised clubs in the country which is staggering for a team who have never won the Bundesliga. They even have several punk bands making references to St Pauli in their music with some members even wearing the club colours at festivals, while performing on stage.

But what is next for the club from Hamburg, in Northern Germany. Well the current season has not been great and the club are bottom of the 2. Bundesliga. It’s time for the players to pull together or they could once again face relegation.

No matter what happens at the end of the season, St Pauli will always have their fanatical fan base to fall back on. The worry for FC St Pauli however, is if they do face relegation again, that doesn’t bring the threat of bankruptcy with it. This is one ‘kult’ club we all want to see survive.

Credit: This article first appeared on the website of CLICKON SOCCER

Vice-president Joachim Pawlik informed the club's supervisory and presidential boards a few weeks ago of his intention to step down. Pawlik, who took office in 2014, subsequently agreed with his colleagues to vacate his position, a step he found exceedingly difficult to take, at the official end of the 2019-20 season. As managing partner of his consultancy firm PAWLIK Consultants GmbH, the 55-year-old no longer feels able to undertake the time-consuming voluntary role of vice-president to the extent he has always demanded of himself.

The future is brown… and cream

Look forward, not back. New season, new start, new shirt. The 2019-20 campaign is over, the final game at Wehen Wiesbaden is done. Time to take a deep breath and look forward to what the new season will bring – in shirt terms at least. For in the 2020-21 season, the Boys in Brown (and white) will play in brown and… cream.

POLITICIANS GIVE GO-AHEAD FOR SEASON RESUMPTION

The state premiers of the 16 German Bundesländer met representatives of the federal government on Wednesday to consider the next steps in the corona crisis. One of the topics under discussion was a possible resumption of the Bundesliga season with regard for the hygiene concept formulated by the German Football League (DFL).