“My God, my kid needs to go here”: In Hamburg, Germany, a professional soccer stadium is also home to an early-education program. 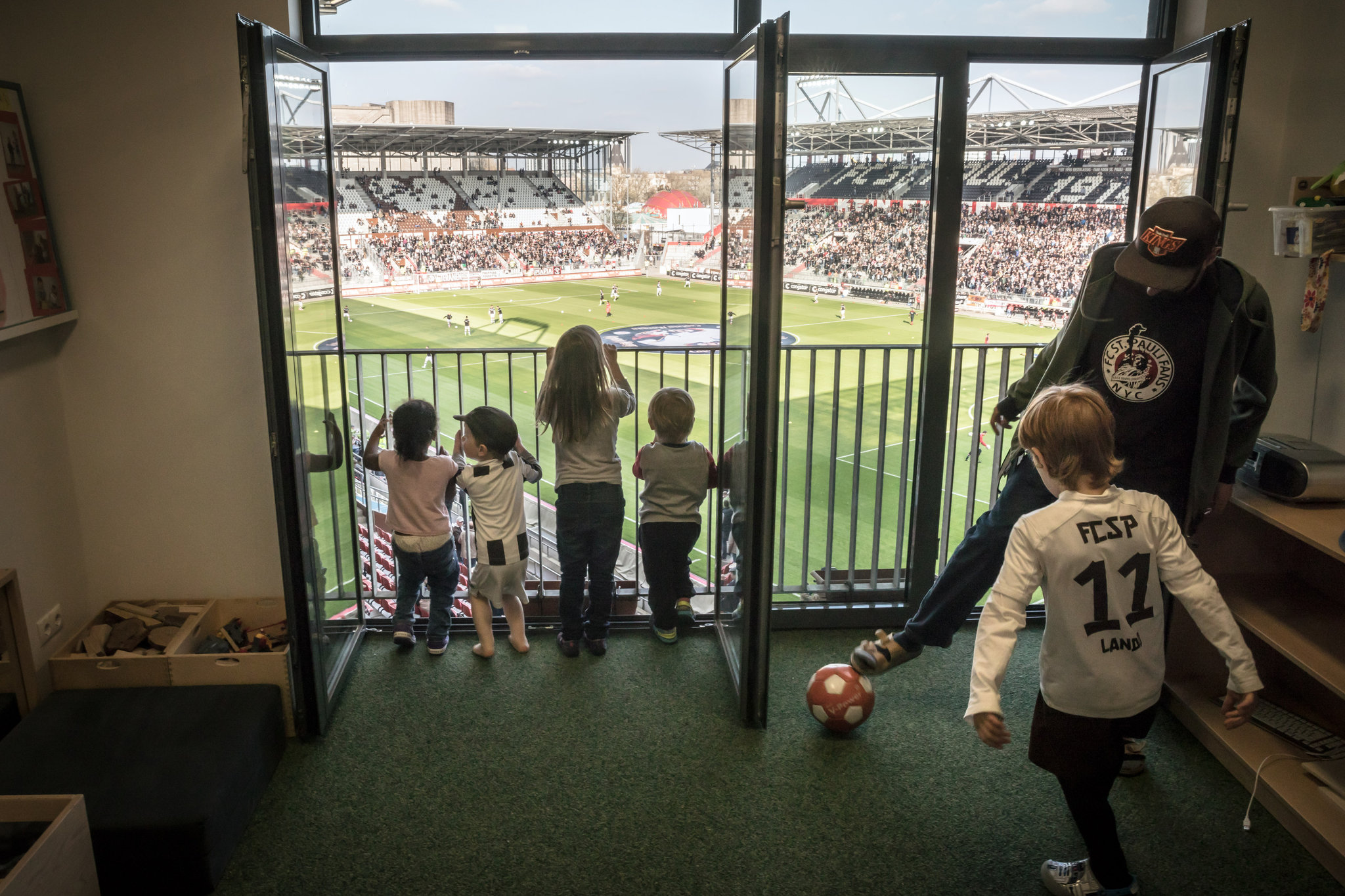 In Hamburg, Germany, it’s kindergarten with a view to excite any sports fan: The program is inside the F.C. St. Pauli soccer club’s stadium. Credit: Gordon Welters for The New York Times

HAMBURG, Germany — It was late Tuesday afternoon at the Pestalozzi Foundation kindergarten, and a few dozen children and their parents were hanging around past the normal pickup hour.

There was no rush to get home, really. They were enjoying the view from the kindergarten’s rear veranda: the inside of Millerntor-Stadion, the 29,546-seat stadium that is home to F.C. St. Pauli, as it hurriedly filled up for a midweek soccer game.

Staying after class has never been this fun.

Since 2010, the Pestalozzi Foundation has operated from inside the stadium — literally inside, not next door or across the street — offering families perks that are most likely unique in the world of early childhood education.

The kindergarten borrows the stadium’s field, tunnels and roof for group activities. Players from the team come by to read to the children. Teachers use the arena’s main stand as a sort of giant break room. And on match days, parents clamor to reserve a spot to watch from the prime vantage point of the kindergarten’s deck, within shouting distance of the rowdy southern stands.

“We applied to three kindergartens,” said Katja Frank, a 42-year-old art teacher who has two children at Pestalozzi. “Two because they were very close to where we lived, and here because of coolness reasons.” 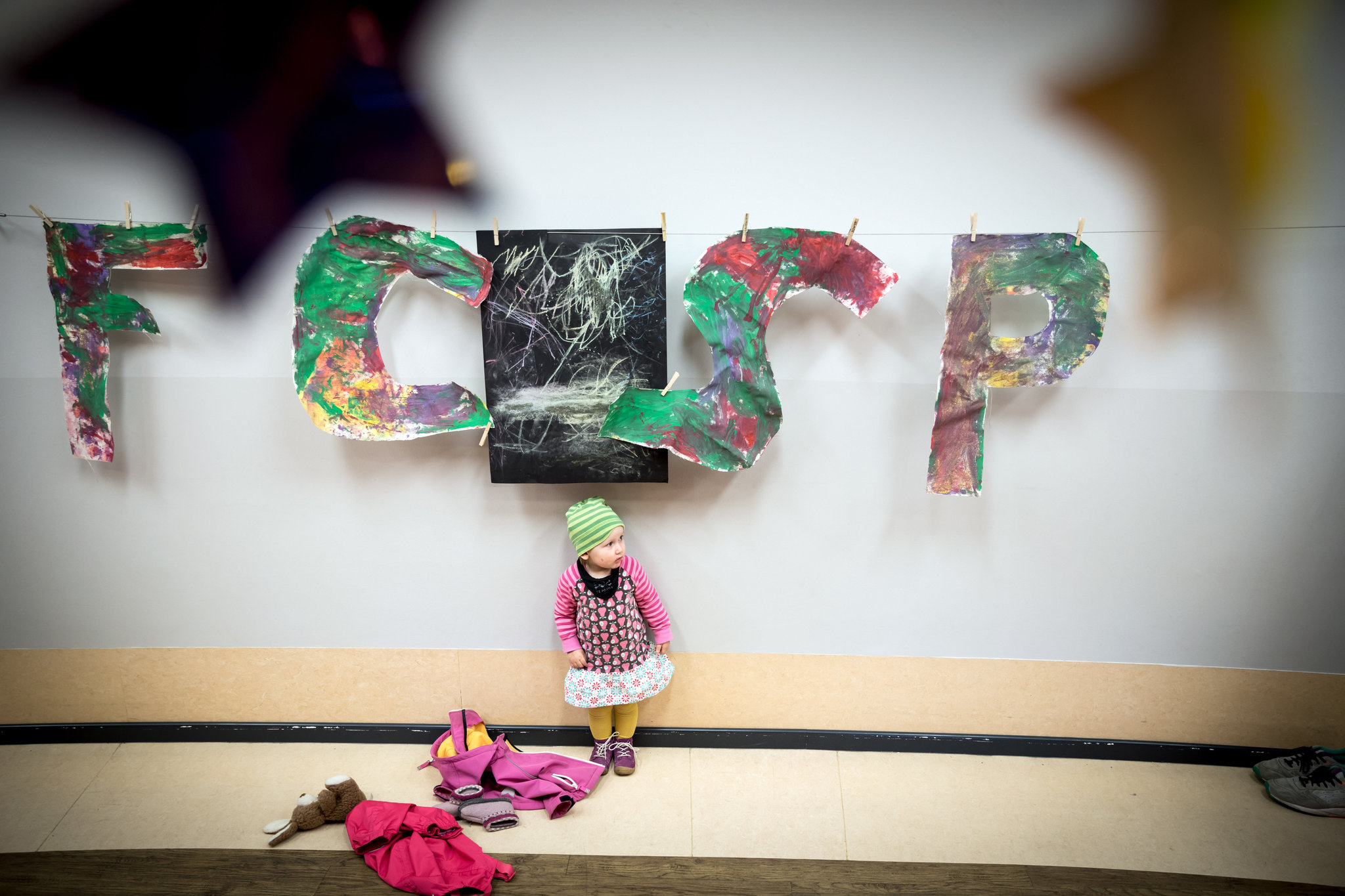 Kindergarten in Germany is closer in concept to preschool in America, existing outside the formal school system as it serves children ages 3 to 6. The German word Kindertagesstätte, which is often shortened to Kita, denotes a day care center for children of any age. Since Pestalozzi accepts children 8 months to 6 years old, people referring to it use the words kindergarten and Kita interchangeably.

On Tuesday afternoon, the players on the field were preparing for a crucial league match against Sandhausen. Inside, in a hallway displaying finger-painted paper cutouts of the club’s initials, F.C.S.P., a toddler swayed determinedly in an all-black onesie bearing the team’s skull-and-crossbones logo. Nearby, a teacher rested a baby on her shoulder, rocking him to sleep.

The kindergarten was conceptualized eight years ago, when F.C. St. Pauli was renovating the stadium. There was space for a building in the southwest corner, between two large rebuilt stands. The decision to use it as a child care center made sense perhaps only in the famously unconventional world of the socially conscious club and its neighborhood.

“The club’s social responsibility for people living in the St. Pauli area is a very special topic for the club, part of our main DNA,” said Christoph Pieper, the club’s chief spokesman, whose two children attend the kindergarten program. (Three other team employees have children enrolled, too.)

After a brief stint in the Bundesliga, F.C. St. Pauli has teetered in the second division for the last few years. Yet despite its mostly modest achievements on the field, it has become famous and quite popular outside Hamburg. Its fan base is known for its left-leaning politics and vocal campaigns against racism and homophobia. Atop the stands — visible from the windows of the kindergarten — huge signs read, in German, “No football for fascists” and “No person is illegal.” 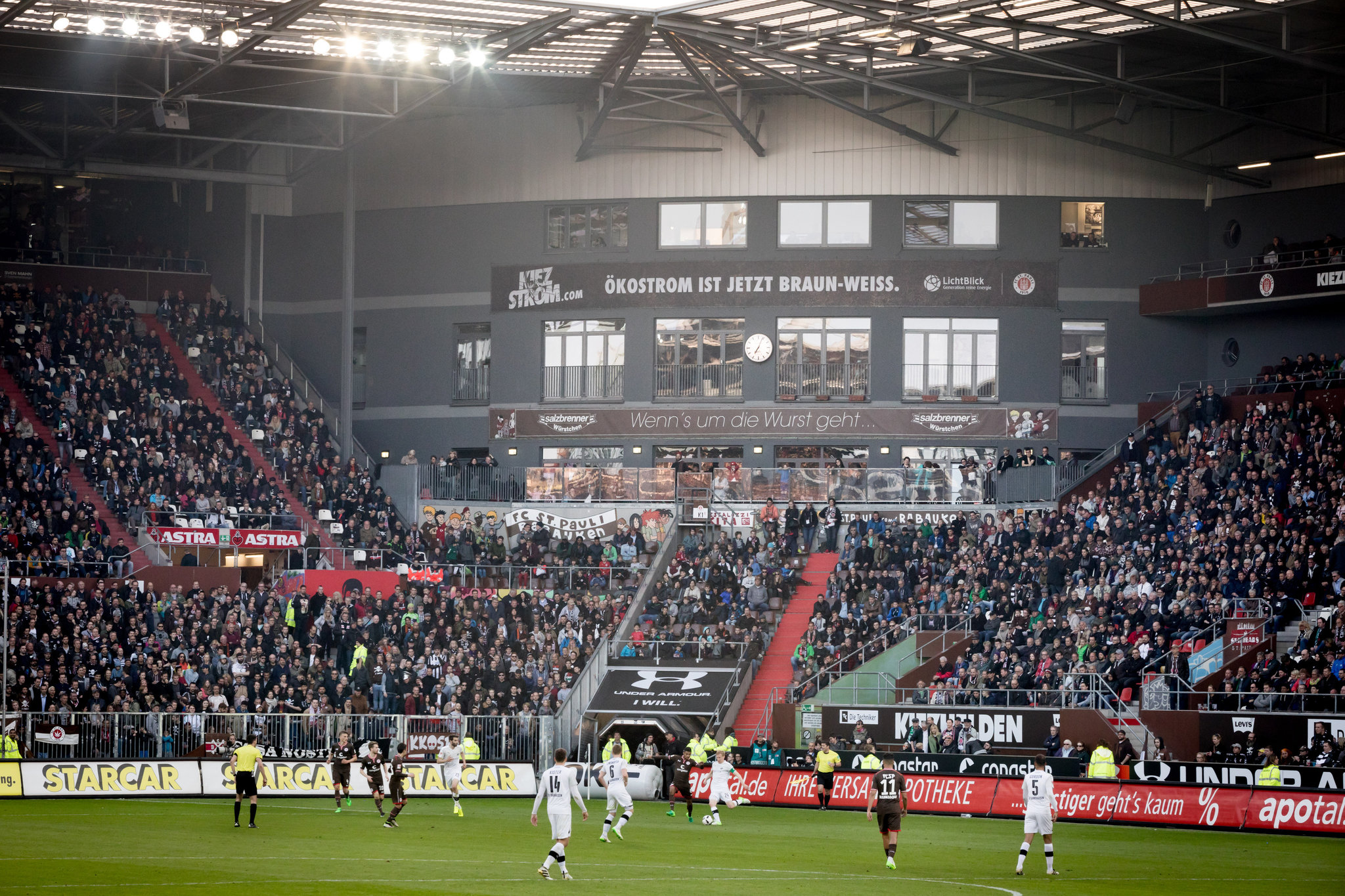 Game day is exciting for fans, and for the kindergartners and their parents, who have a chance to watch the match. Credit: Gordon Welters for The New York Times

St. Pauli, the neighborhood, is a working-class area — known for its music clubs and red-light district — that has been gentrifying in recent years. The team’s skull logo and brown and white colors are prominent around the quarter, where many people equate the club to a lifestyle.

The idea of a day care center in the stadium of the beloved home team, then, seduces many local parents.

“When we do tours, we’ll have parents who are fans of the team come here, and they’re like, ‘My God, my kid needs to go here!’” said Nina Greve, one of the directors of the program. “And I’m like, ‘O.K., let me talk first about what we do and our concept, not just the football.’ That should be the important part, right? But sometimes, it’s all about the soccer.”

Greve and her boss, Juliane Schermuly-Petersen, joked that they were probably the only two staff members indifferent to soccer and the club. A couple of hours before the game, the two were working at a communal desk in their office. They seemed not to notice the fan banging a large drum outside their window.

As the children — there are up to 130 at any time, with a staff of about 20 — went about their activities inside, vendors outside the kindergarten’s entrance were grilling sausages and hawking cold beer. The sun was shining, and fans were beginning to enter the stadium to set up banners and claim their places in the stands. 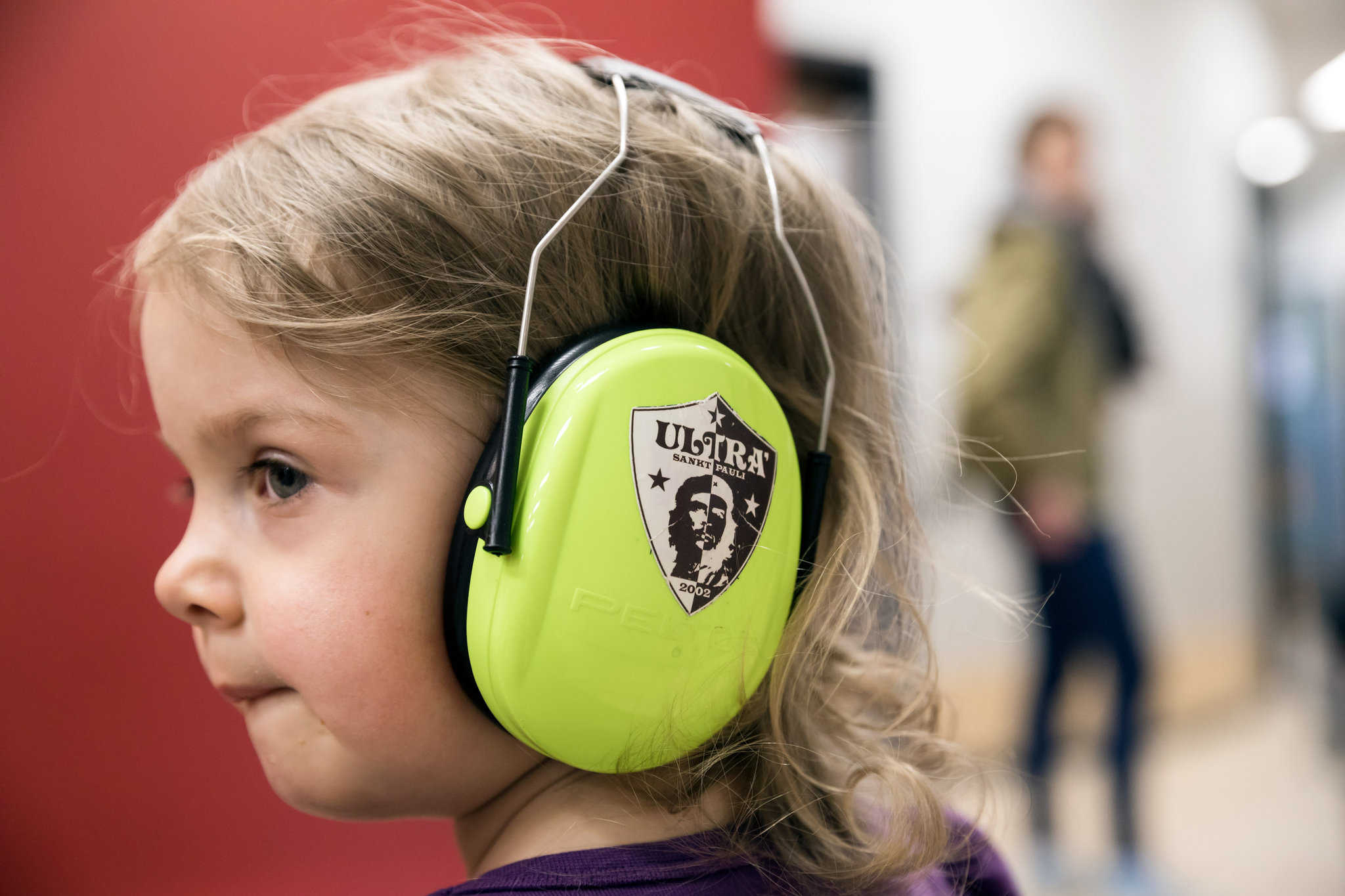 Ear protection helps with the crowd noise when there is a game. Credit: Gordon Welters for The New York Times

“Normally, they’re very drunk,” Schermuly-Petersen said without looking up from her computer screen.

After the children ate their lunch (stew and rice, most of which appeared to have ended up on the floor) and retreated into rooms for nap time away from the commotion building outside, several of the teachers walked out to the middle of the stands for a cigarette break.

“I love the club, I love football, and I can work here every day, so it’s cool,” said Anne Schick, 32, a teacher who moonlights as a goalkeeper for one of F.C. St. Pauli’s women’s teams.

Schick, whose wife also works at Pestalozzi, has been a fan of St. Pauli for 18 years. She said, with some discomfort, that it was fine if any of the children or their parents supported Hamburger S.V. — the other, bigger club in the city — but she pretended to gag as she said its name. Anyway, she joked, she and her colleagues were doing their part to subtly indoctrinate the children.

In these classrooms, soccer chants get mixed in among the nursery rhymes. The teachers, for example, subtly reworded one of the club’s popular songs for the children to sing together:

When the whole Kita sings for St. Pauli,
It sounds through the Millerntor.
The city’s best kids only sing for you.
So come on, F.C., score another goal. 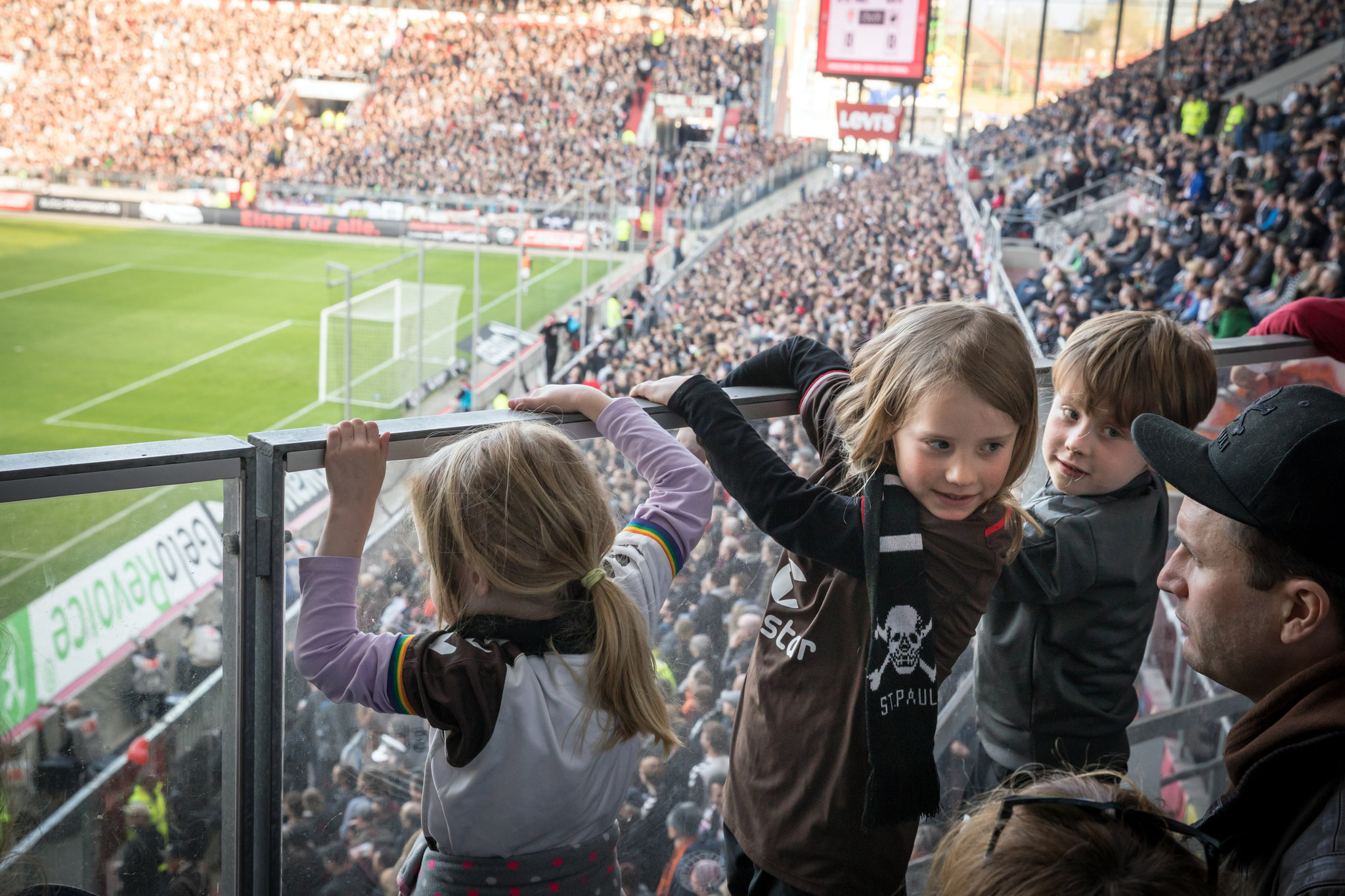 Children enjoying the game from the kindergarten balcony. Credit: Gordon Welters for The New York Times

About an hour before the game, the terrace outside the kindergarten began to fill with young parents in bomber jackets, snapback caps, stylish glasses and interesting shoes. Coffee and some snacks appeared. Outside, near the front door of the kindergarten, a man with a green mohawk vomited onto the side of the building.

Pestalozzi makes a modest number of spaces on the terrace available to parents for each game, posting sign-up sheets a few days before. During the matches, the classrooms are staffed with teachers and interns, so the children can watch the match with their parents or play indoors.

Niels Grützner, one of the parents, held his son Bo, 3, who wore green earmuffs to minimize the crowd noise. Grützner was particularly excited for this game: His son Piet, 8, was to be walking onto the field with the players during the pregame ceremony.

“We don’t need any babysitters for match days, which is really important if both parents are fans of the team,” said Grützner, a journalist.

Minutes later, Grützner, in fingerless gloves and a beanie, stood on a chair, holding a team scarf above his head as the game kicked off.

Frank, the art teacher, has attended about a dozen games over the last few years. She said the matches were a great way to befriend other parents and get to know the teachers.

“It is hip, a nice place to be,” Frank said. “The people are politically correct.”

“They’re quite good at screaming,” she said with a smile.