When the game kicked off in front of around 500 spectators at the URSAPHARM-Arena an der Kaiserlinde, it was the home side, who already have two league games under their belt, who created the first chance in the third minute. Luca Schnellbacher latched onto a long ball forward from Sinan Tekerci and tried his luck with a lob from just outside the area, but his effort came down on top of the goal. The ball did find the net four minutes later, however, when an angled crossfield pass from Christopher Avevor found Leart Paqarada, who cut the ball back from the left for the advancing Marvin Knoll to plant a shot into the bottom left-hand corner.

The joy proved short-lived, as Elversberg levelled the scores just after the quarter-hour, capitalising on an undercooked pass from Afeez Aremu to Knoll to set up Schnellbacher, who left Robin Himmelmann no chance with a pinpoint low effort. The home side grew in confidence and were presented with another chance when Himmelmann underhit a clearance and Israel Suero Fernandez curled a shot against the upright before Sinan Tekerci put the rebound wide of the far post.

Elversberg did go ahead soon after, however. An Eros Dacaj free-kick evaded several players before Patryk Dragon, under pressure from Marvin Senger and Marvin Knoll, prodded the ball over the line from seven metres. Three minutes later it could have been three, but Himmelmann defused a Schnellbacher shot from 14 metres following a corner. Schultz had seen enough and made an early change in the 35th minute, Jannes Wieckhoff coming on for Senger. That didn’t stop Elversberg carving out another opportunity on 37 when Dragon fired over the top from seven metres when looking favourite to score. It remained 2-1 at the break, a scoreline that was no less than the fourth-tier outfit deserved. 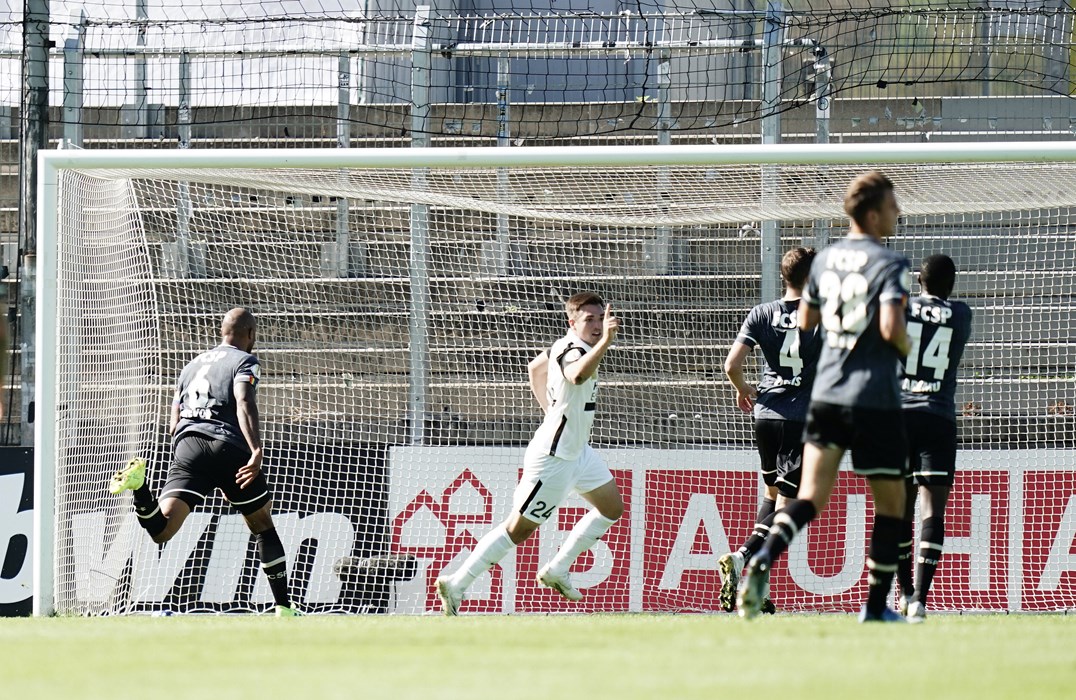 Luca Schnellbacher punishes the Boys in Brown for a mistake in the build-up and levels the scores.

The Boys in Brown emerged unchanged for the second half, but the pattern of the game remained very much the same. Elversberg remained in the ascendancy and fashioned further chances. A Suero Fernandez free-kick from a central position was deflected for a corner, and when Dacaj delivered the ball into the middle, Tekerci flicked it on for Robin Fellhauer to head past the stranded Himmelmann at the back post. In an attempt to hit back quickly, Sebastian Ohlsson shrugged off a couple of challenges and dispatched the ball into the box towards Maximilian Dittgen. His header lacked the necessary precision, however, and the ball flew wide of the right-hand upright. At the other end, Manuel Feil almost made it four with a header that flew just over the crossbar.

With an hour gone, Schultz made a triple change, throwing on Rodrigo Zalazar, Rico Benatelli and Simon Makienok for Afeez Aremu, Marvin Knoll and Borys Tashchy in a bid to ward off an early cup exit. The home defence continued to keep a tight ship at the back, however, and put the result almost beyond doubt with 67 minutes on the clock. A long ball forward from Maurice Neubauer found Suero Fernandez and he squared for Schnellbacher to net from close range. Suero Fernandez could and perhaps should have made it 5-1 from the penalty spot five minutes later, but he blasted his spot-kick over the top.

Rico Benatelli provided a semblance of hope 12 minutes from time when he made it 4-2 after Ohlsson had forced his way down the right and cut a low cross back for Benatelli to finish into the bottom right corner from the edge of the box. Three minutes later, substitute Lukas Daschner almost made it 4-3. After initially miskicking he recovered to hit a fierce shot on the turn that produced a decent stop from SVE keeper Frank Lehmann. Zalazar then curled a free-kick just over the top.

That was the final action of note, however. The Boys in Brown succumbed 4-2 against an impressive Elversberg side to go out of the DFB Cup at the first hurdle.

The question of who will skipper the Boys in Brown this season has been settled. After Robin Himmelmann, Christopher Avevor, Daniel Buballa, Philipp Ziereis and Marvin Knoll were voted onto the five-man players' committee during training camp, head coach Timo Schultz has now named Avevor as team captain.