FC St. Pauli beat FSV Frankfurt 2-1 in a friendly on Thursday evening thanks to goals from Dimitrios Diamantakos and Ryo Miyaichi in front of a crowd of 498. Dusan Crnomut replied for the home side. Both teams ended the game with ten men after Diamantakos and Robert Schick were dismissed following a first-half scuffle.

Head coach Markus Kauczinski took advantage of the friendly at FSV Frankfurt to give a run-out to players who have had limited game time so far this season. New signing Korbinian Müller started in goal, while Under-19 talents Mert Kuyucu and Niclas Nadj also made the trip south.

No sooner had referee Julius Martenstein blown his whistle to start the action than the Boys in Brown found themselves ahead with just two minutes on the clock. Cenk Sahin dispatched a cross into the middle, where Dimitrios Diamantakos steered a header into the back of net. The Boys in Brown controlled the proceedings in the ensuing period and doubled their advantage on the quarter-hour, Sahin floating another cross towards the back post for Ryo Miyaichi to head home.

Miyaichi and Jan-Marc Schneider had chances to make it 3-0 but it was the home side who found the target with their first opportunity of the game on 26, Dusan Crnomut getting the better of Korbi Müller from 13 metres to halve the deficit. There was action of a different kind in the 34th minute when FSV captain Robert Schick and Dimi Diamantakos were given their marching orders after a hefty scuffle. 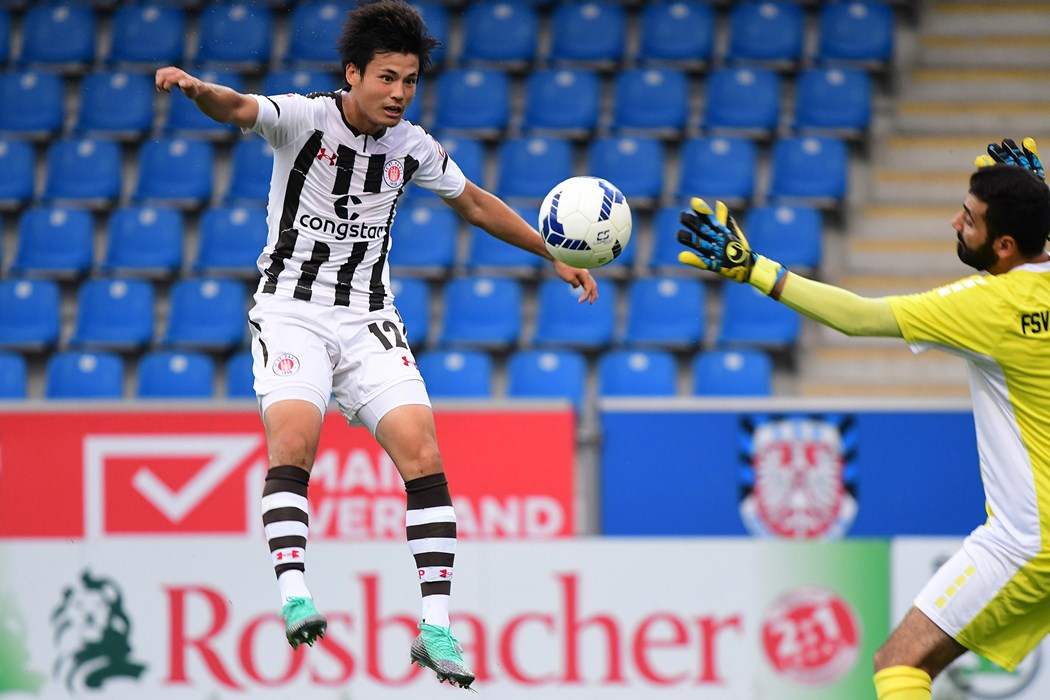 Kauczinski made just one change at half-time, introducing Ersin Zehir for Jeremy Dudziak in holding midfield. His team again got off to the better start. With 48 minutes gone, Schneider only narrowly failed to get on the end of fiercely struck cross from Park, and five minutes later the No29 was denied by a fine reflex save from Frankfurt keeper Matay Birol. The home side had a decent chance of their own straight after, but fortunately Marcus Weinhardt's shot smashed against the crossbar.

Mert Kuyucu and Niclas Nadj were then given their first senior outings, coming on for Luca Zander and Bernd Nehrig respectively. The Boys in Brown stepped up the pace again and fashioned further chances for Miyaichi, Miyaichi again and Sahin.

With the game entering the closing stages, Kauczinski made a triple change, Ryo Miyaichi, Cenk Sahin and Jan-Marc Schneider making way for Waldemar Sobota, Richard Neudecker and Henk Veerman. Almost immediately, the big Dutchman rattled the underside of the crossbar with a venomous drive from Neudecker's delivery. And in the last few minutes Müller produced two fine stops to seal a 2-1 victory for his new teammates.

"All in all, it was a good test," said Markus Kauczinski after the final whistle. "The red card was totally unnecessary, though. Dimi did himself and the team no favours with that. Apart from that our movement was good and we perhaps could have scored a few more. We had a lot of young players on the field and I was very pleased with the way they performed. Korbi Müller was also a very calming presence in goal."

"Our focus is on keeping performance levels high"

Performance coaches Christoph Hainc Scheller and Karim Rashwan are in big demand in the current phase, not only when it comes to creating individual training plans for the players, but also in fielding questions from the media. In a telephone interview with Hamburg journalists on Wednesday, Christoph and Karim spoke about their work at the moment and…