BURGSTALLER: "IMPORTANT TO REPRODUCE THAT ENERGY EVERY WEEKEND"

Guido Burgstaller returned to the starting lineup in Saturday’s 1-1 draw against Holstein Kiel after more than two months out with injury. On Monday, the Austrian striker met representatives of the Hamburg media to talk about the game and a range of other topics.

...his physical shape: "I’m still not 100% yet but it was good to get some match practice against Kiel. It’s difficult to get that back in training. I still need more sessions with the team and more match practice, but it was a good start. I hope to be back to 100% and where I want to be physically in a couple of weeks.”

...his injury layoff: "I was in Hamburg the whole time and spent a lot of time with the team on the training ground because I was still new and wanted to integrate as quickly as possible. The coaching team gave me the support I needed to do the rehab programme agreed with the ENDO Clinic and spend so much time with the squad, so I didn’t lose too much as far as access to the team was concerned. I watched the games, of course, and I attended the team meetings as well.”

...the urge to help out as soon as possible: "When you’re injured, you always want to get back on the pitch as quickly as possible and help the team. That’s normal and everyone should see it that way. I had the urge to get fit as soon as I could but only in consultation with the doctors about the how and when. I’m glad I was able to rejoin the team so quickly."

...the Kiel game: "Looking back at the 90 minutes, it was a good performance. We attacked the ball very well and created several chances. We had a bit of luck on occasions, but you need that against such a good team. It was a decent showing that gives us courage for the tasks to come." 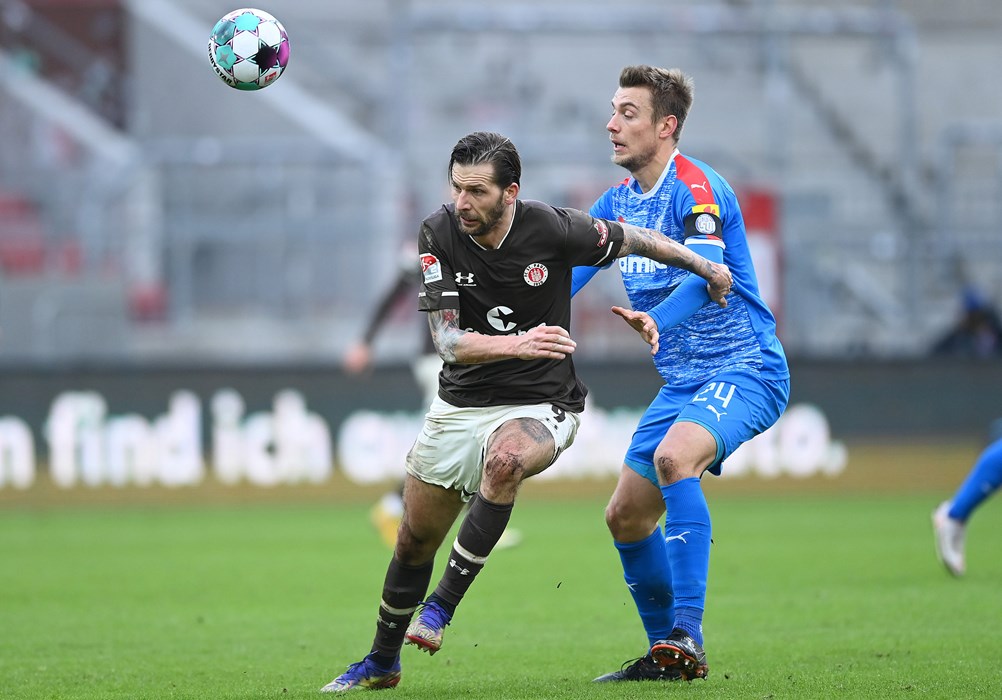 Guido Burgstaller was mostly up against Kiel captain Hauke Wahl on his return to the starting lineup.

...the biggest areas in need of improvement: "We have to start keeping clean sheets again and create better chances. It will be important to reproduce the energy we brought to the pitch against Kiel every weekend. We’ll be tough to be play against if we can do that."

...his role as a leader: “I obviously try to pass on some of my experience to the young players, to lead by example on the pitch and support them when things aren’t going so well. I hope to be fully fit again soon so I can help the team 100%.”

...the importance of a win: "Winning is the most important thing, it gives you renewed energy and boosts your confidence. If we play like we did against Kiel, with the energy everyone had, the wins will come. I’m convinced of that. We’ve shown our quality often enough this season.”

...points that give hope: "First of all, I think we can and will play our way of trouble with that quality. The team spirit is excellent and no one’s giving up. We’re all pulling together with the coaching team. The most decisive and important thing in a situation like this is that we all stick together, stay on our path and keep our belief that we have enough quality. We’re all convinced of that."