FC St. Pauli claimed victory in the local derby on Monday night, overcoming HSV 2-0 in front of 29,226 spectators at the Millerntor. Dimitrios Diamantakos and an own goal from Rick van Drongelen settled it in favour of the Boys in Brown.

Head coach Jos Luhukay made three changes to the team that drew 3-3 at Dresden before the international break. Florian Carstens, Niklas Hoffmann and Waldemar Sobota were the ones to miss out, with Sebastian Ohlsson and Leo Østigård handed their first starts and Christian Conteh returning on the left wing.

After a cagey start by both teams, a Leo Østigård header in the 11th minute followed by a left-foot rocket from Marvin Knoll that forced HSV keeper Daniel Heuer Fernandes into a decent save marked the opening of the hostilities. And just four minutes later the Boys in Brown took the lead when Knoll powered a header against the post and Dimitrios Diamantakos risked his neck to stoop low and head the ball over the line. 1-0!

The visitors struggled to find the right response and the Boys in Brown had little trouble keeping the visitors away from Robin Himmelmann's goal. Bakery Jatta and Lukas Hinterseer mustered efforts around the half-hour mark, but the FCSP keeper patted both attempts away with relative ease.

Not until the closing stages did Dieter Hecking's team crank up the pressure. Himmelmann did well to turn a powerful Sonny Kittel volley onto the crossbar two minutes before the break and then the visitors had the ball in the net. Hinterseer was the man on target, but the goal was ruled out because the ball had gone out of play before Jatta could deliver the cross. 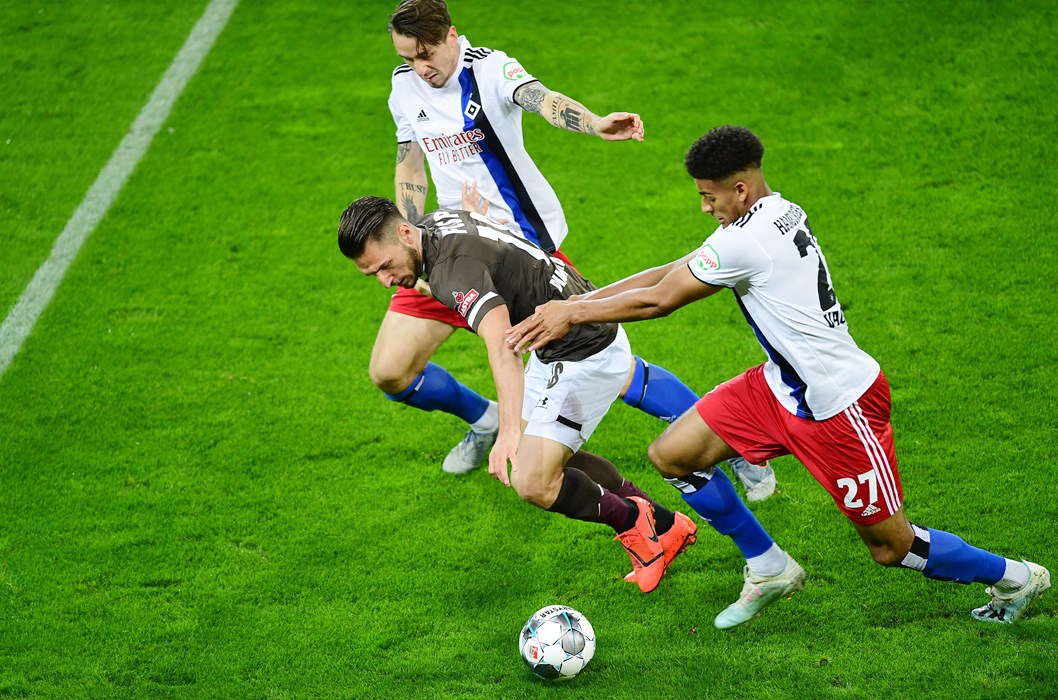 Hecking's men maintained the pressure after the restart. Luhukay had said his players would need to scrap and that's what they did. The Boys in Brown defended with great passion, but the visitors still fashioned two big chances. The first came when Adrian Fein embarked on a mazy run down the middle before lofting a pass towards Hinterseer, whose header was punched away by Himmelmann. Three minutes later the Austrian looked almost certain to score from David Kinsombi's pass, but his shot hit his standing foot on its way towards goal and looped over the crossbar.

Meanwhile the Boys in Brown were beginning to pose a threat on the counterattack. On one such upfield charge in the 56th minute, Diamantakos got in behind the HSV backline on the right and found Knoll with the cross, but the ball skimmed off his forehead and flew wide. Seven minutes later the Millerntor erupted a second time when Knoll got a slight touch on a quickly taken free-kick from Mats Møller Dæhli, causing Rick van Drongelen to divert the ball over his own line to double the advantage.

The goal seemed to knock the stuffing out of the visitors and from then on it was the Boys in Brown who looked more likely to score. Substitute Matt Penney dragged a shot narrowly wide and Knoll went close with a header before Heuer Fernandes was forced to palm away a fierce drive from Diamantakos. Sixty seconds later Møller Dæhli went even closer, his shot smacking back off the left-hand upright. And with two minutes or regulation time left, Buballa ran out of steam in a one-on-one with Heuer Fernandes and could only direct his shot straight at the keeper. It mattered not, as a few minutes later the referee blew the final whistle to pull the curtain down on a famous victory. Hamburg is brown and white!

FC St. Pauli earned a 1-1 draw at Karlsruher SC on Saturday afternoon. A 55th minute strike from Dimitrios Diamantakos was cancelled out almost immediately by Jerome Gondorf. That came after Robin Himmelmann had saved an Änis Ben-Hatira penalty. The draw ensures the cushion to the relegation play-off spot remains at five points.

LUHUKAY: "MAYBE WE HAD A BIT MORE LUCK TODAY"

After the goalless draw at Karslruhe SC, we noted the key statements from the two head coaches and the players.

BOYS IN BROWN OUT TO TAKE THEIR CHANCE AT KARLSRUHE

Off to Karlsruhe. A busy week comes to an end with a veritable six-pointer at KSC on Saturday (13:00 CET). An encounter with opportunities for both teams.