Another three points are up for grabs when the Boys in Brown contest the final match of this week's round of fixtures at Holstein Kiel on Monday evening (20:30 CET). What awaits the Boys in Brown on the coast? As usual, we've taken a closer look at our next opponents.

When Holstein Kiel dismissed former FCSP coach André Schubert in mid-September, having only appointed him in summer, Under-23 coach Ole Werner took caretaker charge for four league matches (two wins, two defeats). A few days after the 1-0 win at Stuttgart, he was handed the job on a permanent basis. Aged just 31, Werner succeeded Leipzig supremo Julian Nagelsmann, 32, as the youngest head coach in the professional German game.

Janni Serra and Jae-sung Lee lead the way in terms of goals and assists for Kiel, having both scored six goals and made another three. Lee is one of the league's most prolific midfielders, with only Sony Kittel (10 goals so far) finding the net more often than Lee, who is also one of the hardest running, with 228.02 kilometres already under his belt. It remains to be seen whether Serra will feature against the Boys in Brown, however, after missing both games since the winter break due to a thigh strain.

In Daniel Hanslik (on loan at third-division Hansa Rostock), Kiel let one forward go just before the end of the winter break, having signed a striker in Fabian Reese in early January. Reese, who emerged as the matchwinner in Saturday's 2-0 win at Karlsruhe, scoring the first goal and making the second, arrived on a three-and-a-half year deal from FC Schalke 04. Reese is no stranger to the club. He was born in Kiel and progressed through the Storks' youth ranks between 2005 and 2013 before joining Schalke's Under-17 team and eventually making 16 Bundesliga appearances for the Royal Blues. Reese knows his away around the second division after spells on loan at Karlsruhe (ten appearances in the second half of the 2016/17 season) and Greuther Fürth (45 appearances between January 2018 and June 2019).

Holstein Kiel have been reduced to ten men twice this season, with Jonas Meffert the man receiving his marching orders on both occasions. The midfielder was given a straight red for a foul on Marvin Wanitzek in the 2-1 home win over Karlsruhe, and then picked up a booking for dissent and was then promptly sent off for a derogatory gesture to referee Alexander Sather in the 4-2 defeat against Osnabrück. Darmstadt's Victor Pálsson is the only other player to be sent off twice (1x red, 1x two yellows). Meffert has also "collected" three yellow cards, putting him top of the second-division card statistics ahead of Pálsson. 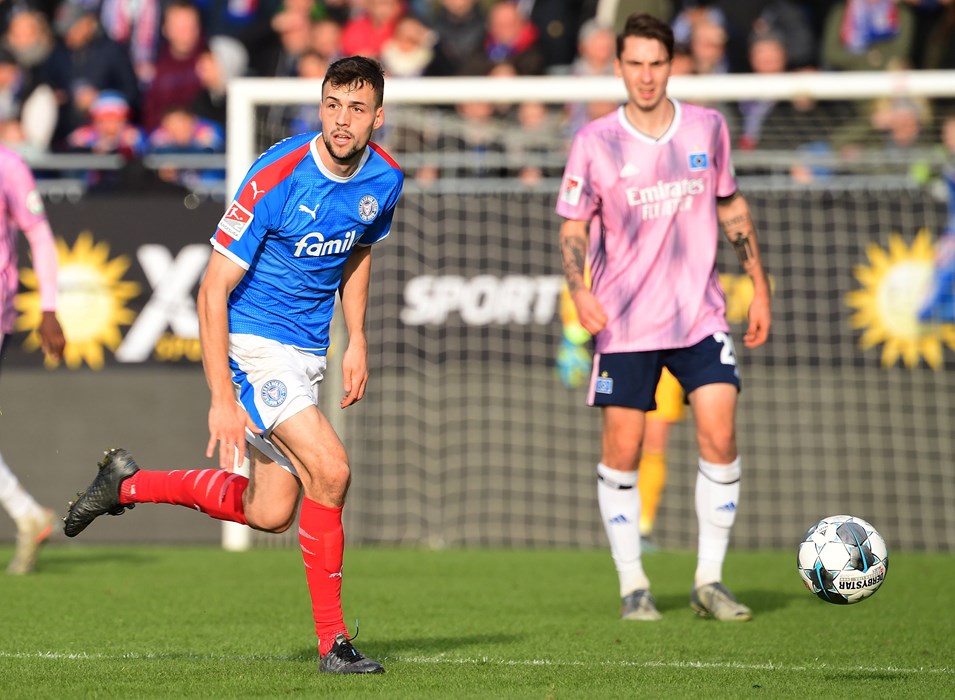 Jonas Meffert, seen here in the home game against HSV, has been sent off twice this season.

The Boys in Brown have been caught offside just 23 times in the 20 league games played so far, fewer than any other second division team. For Kiel, in contrast, it's a completely different story. They have been flagged offside 57 times in total, more than any other team. Jae-sung Lee and Makana Baku have strayed off most often (both 12 times). Across the leagues, only Bayer Leverkusen have been pulled up for offside more often (58).

HIMMELMANN: " WE'RE DELIGHTED TO HAVE GIVEN THE FANS THIS MOMENT"

After the derby win at HSV, the on-pitch celebrations with the fans continued without interruption in the dressing room. Understandably, the mood was one of jubilation. Here's the best of the reaction.