FC St. Pauli slipped to a 2-1 defeat at Holstein Kiel in the final match of this week's round of fixtures on Monday evening. After an evenly balanced opening, Kiel upped the pressure and took the lead through Salih Özcan on the half-hour, but an improved Boys in Brown levelled soon after the restart thanks to Henk Veerman's strike. Substitute Janni Serra then restored the home side's lead within minutes of entering the fray. Finally, in the fifth minute of time added on, Kiel goalkeeper Ioannis Gelios denied Veerman from the spot.

Head coach Jos Luhukay made one change to the side that drew 1-1 with VfB Stuttgart last time out, Matt Penney making way for Luca Zander, who slotted in at right-back, with Sebastian Ohlsson moving over to the left. The Boys in Brown went into the game hoping to build on a good performance against Stuttgart and secure their first win away from home in 11 months. They could draw courage from an impressive Monday night record that had seen them win eight out of 12 games, including the 2-1 defeat of Kiel in the reverse fixture in late August.

The opening stages were devoid of highlights, with the Boys in Brown content to wait for a chance to break against a Kiel side who moved the ball around nicely but were unable to mount a threat. The first chance of the game fell to Jos Luhukay's side with 15 minutes gone, Henk Veerman slipping the ball to Viktor Gyökeres, who drove forward from midfield and smashed a shot wide of the post from distance.

Veerman then had a hand in Kiel's first chance, albeit unintentionally. His backpass to Robin Himmelmann went straight to Emmanuel Iyoha, whose shot was parried by Himmelmann, and Johannes Flum had to scramble back to deny Salih Öczan on the rebound. That proved to be the opening salvo in a spell of Kiel pressure that saw them fashion another opportunity a few minutes later. A free-kick from midfield found its way to Jonas Meffert, who pulled the trigger from a narrow angle – fortunately Himmelmann was alert to the danger and turned the ball round the post with his foot.

There was little Himmelmann could do shortly after, however. Finn Porath knocked a pass into the path of the advancing Özcan, who with just the keeper to beat kept a cool head and dispatched the ball into the bottom-left corner to open the scoring. Luhukay's side struggled to find an answer to Kiel's pressing game and made little headway after that. When Waldemar Sobota did come up with an idea, Kiel custodian Gelios was out of his goal quickly to beat Veerman to the upfield ball. There was no further action of note and so the Boys in Brown went in a goal down at the break. 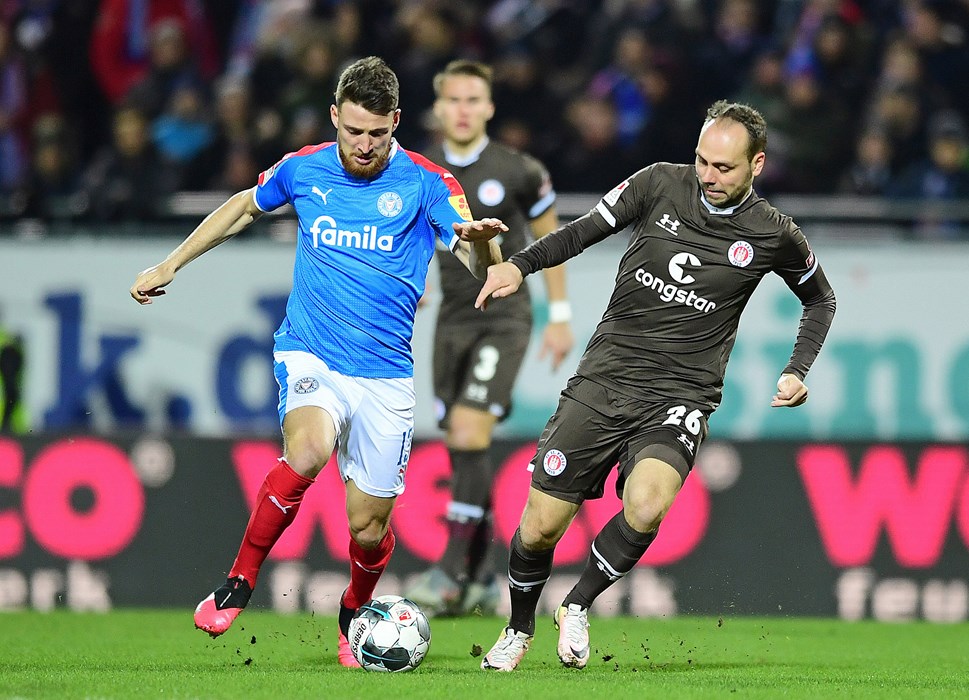 The Boys in Brown came back out unchanged, though Kiel were forced to make a change due to injury. Alexander Mühling was replaced by Aleksandar Ignjovski. Luhukay's side stepped up their attacking efforts and soon got their reward. A long ball forward by Zander found Gyökeres, who squared it to Veerman. The striker showed a great piece of skill to outwit Hauke Wahl before slipping the ball past Gelios to level the scores.

Luhukay made his first change with an hour gone, introducing Finn Ole Becker for Flum, who was on a yellow. Kiel coach Ole Werner followed suit six minutes later, striker Janni Serra replacing midfielder Finn Porath. And Serra it was who met an Özcan corner at the near post to nod the home side back in front against the run of play. Moments later Iyoha tried his luck from range, but the ball flew well wide.

The game entered the closing stages with the Boys in Brown slowly running out of time to find another equaliser. Özcan could have settled it at the other end with 11 minutes left, but his shot flew just over from 15 metres. Luhukay responded with the introduction of striker Boris Tashchy for Sobota and then threw on winger Luis Coordes for Luca Zander. The Boys in Brown increased the pressure and with seven minutes left had the chance to equalise following a long ball forward. Sebastian Ohlsson popped up unmarked in front of Gelios but was denied by a decent save from the Kiel custodian.

At the other end, Serra had a good chance, but Daniel Buballa was on hand to snuff out the danger. The Boys in Brown threw everyone forward in the last few minutes. The ball was knocked long into the box and struck Wahl on the arm, prompting loud appeals for a penalty. Referee Arne Aarnink had another look at it and eventually pointed to the spot.

Now in the fifth minute of stoppage time, Veerman stepped up, only to see his effort saved by Gelios. But there was more madness to come. Meffert played the rebound back to Gelios, who picked it up, resulting in an indirect free-kick six metres out. Veerman squared the ball to Gyökeres, whose shot was turned over the bar by Gelios. Two more corners came to nothing, putting the seal on the fifth away defeat of the season.