DECENT SHOWING BUT IT ENDS 1-1 AGAINST KIEL

FC St. Pauli had to settle for a 1-1 draw against Holstein Kiel on Saturday afternoon despite putting in a decent performance. After a goalless first half, new recruit Omar Marmoush gave his side the lead with a fine strike on 52 before Joshua Mees levelled for the visitors ten minutes later.

Head coach Timo Schultz made six changes to his side for the visit of second-placed Kiel. New boy Dejan Stojanović started between the posts, with Adam Dźwigała and Daniel Buballa coming into the back four for the suspended Marvin Knoll and Sebastian Ohlsson. Rodrigo Zalazar replaced Afeez Aremu in defensive midfield, new signing Omar Marmoush was preferred to Maximilian Dittgen on the right flank, and Guido Burgstaller began up top for Igor Matanović. Kiel coach Ole Werner made one adjustment to the team that lost 2-1 at home to VfL Osnabrück, Fabian Reese coming in for Joshua Mees.

It was a high-intensity affair from the outset with the Boys in Brown creating the opening chances. Eight minutes in, Omar Marmoush was denied by Kiel keeper Ioannis Gelios after being found in the left channel by Rodrigo Zalazar. Finn Ole Becker headed the rebound towards goal, only for Stefan Thesker to get a block in. The ball fell to Guido Burgstaller, who fed Marmoush, and his curling effort from 13 metres sailed past the far post. Jannik Dehm then screwed a shot wide for the visitors before Janni Serra only narrowly failed to connect with a low ball in from former St. Pauli man Fin Bartels.

The Boys in Brown continued to push forward, as Schultz had demanded before the game, but were initially kept at bay by a Kiel rearguard that arrived at the Millerntor unbeaten away from home (four wins and two draws from six games). That was to change on 21 minutes when Leart Paqarada teed up the lively Marmoush and he pulled the trigger from a central position just inside the box, but Alexander Mühling threw himself in the way and got the block in. A second of two corners from Paqarada then reached Burgstaller at the back post. His header from a narrow angle found the side netting.

The high-flying visitors were anonymous in attack for long periods in the first half, which was primarily down to a good defensive showing from the whole St. Pauli side, who flew into the tackles and supported each other throughout. With half an hour gone, Kiel began to threaten and a Mühling corner was flicked on by Jonas Meffert towards the near post and into the side netting. Two minutes later, Jae-sung Lee squared the ball to the unmarked Janni Serra, whose close-range effort produced a diving save from Dejan Stojanović. Kiel came again but their remaining attacking efforts fizzled out. Paqarada aimed a free-kick too high two minutes from the interval and a lively first half ended goalless. 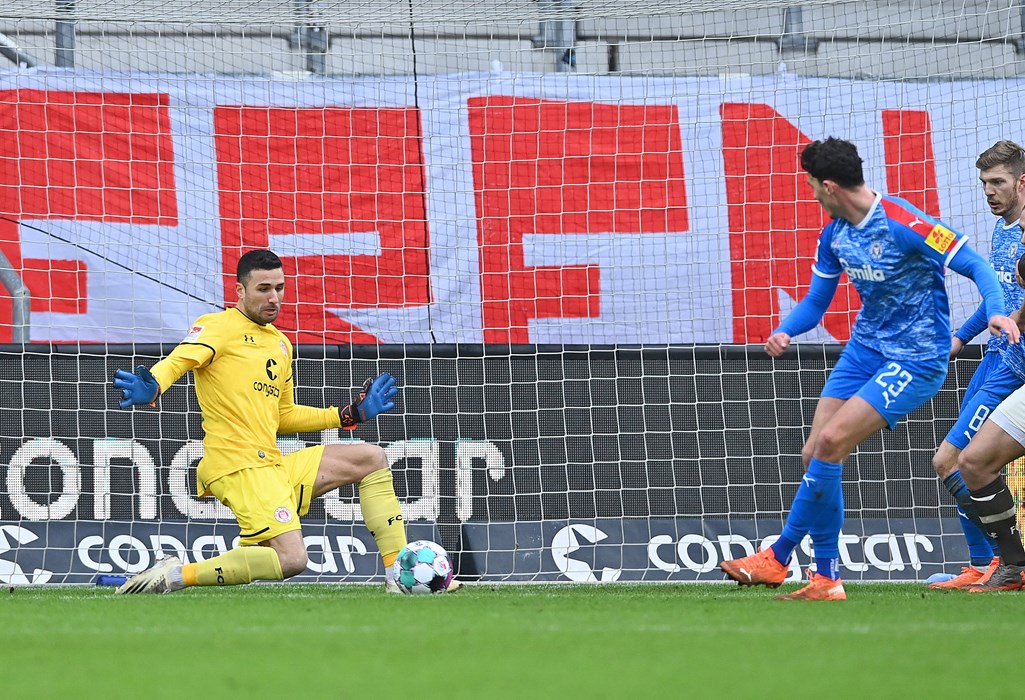 Schultz sent out an unchanged side for the second period, while Marco Komenda replaced Johannes van den Bergh, who was on a booking, for the visitors. The first chance fell to the hosts, Becker setting up Marmoush, whose shot from the right channel was saved by Gelios. At the other end, Serra met a cross with his head and the ball flew a good metre past the angle of the far post and bar. It remained an entertaining affair, with both teams looking to attack at pace on winning possession.

After winning one such ball, the Boys in Brown launched a quick counterthrust via Burgstaller. He fed Daniel-Kofi Kyereh, who knocked a pass to his right into the path of Marmoush and the new acquisition wasted no time rifling a first-time shot into the top-left corner of the goal off the underside of the crossbar – what a strike! Marmoush was in the spotlight again a few minutes later, collecting a pass from Burgstaller and turning on a sixpence to leave the Kiel defence for dead. Clean through, he unleashed a shot, only to see Gelios produce a fine save to keep it at 1-0.

Kiel responded with a double substitution and quickly found themselves level when Bartels delivered a cross into the middle for the unmarked Joshua Mees to head home from seven metres just two minutes after entering the fray. There was nothing Stojanović could do to prevent the ball sneaking in by the right-hand upright.

The intensity of the game moved up a notch, with a string of tackles and niggling fouls interrupting the flow of the game. Much of the action unfolded between the two penalty areas, with chances remaining a rarity in this phase. With the game entering the closing stages, Timo Schultz introduced three fresh players in Leon Flach, Maximilian Dittgen and Igor Matanović for Adam Dźwigała, Omar Marmoush and Guido Burgstaller.

The changes had no real impact, however, as both defences were too well marshalled and neither team was able to fashion any meaningful chances. Becker popped up in the box following a Matanović pass two minutes from the end of regulation time, but he was unable to get a shot off. The Boys in Brown threw everyone forward in a bid to find a winner, but it remained 1-1. All in all, it was a decent battling performance in their third game in a week, but ultimately not enough to land the hoped-for home win.