BOYS IN BROWN SURRENDER TWO-GOAL LEAD TO DRAW WITH KSC

Two late goals for the visitors denied FC St. Pauli their fourth home win of the season in a 2-2 draw with Karlsruher SC in front of a sell-out crowd at the Millerntor. Dimitrios Diamantakos gave his team the upper hand with two second-half penalties, only for Marc Lorenz and Marvin Pourié to restore parity late on.

Head coach Jos Luhukay made five changes to his starting lineup following the 2-1 DFB Cup defeat against Eintracht Frankfurt in midweek. Robin Himmelmann, Luca Zander, Finn Ole Becker, Ryo Miyaichi and Dimitrios Diamantakos all returned the side, as the Boys in Brown reverted to a back four.

The Dutchman's team made a bright start to the game and fashioned two chances for Waldemar Sobota early on. At the other end, Himmelmann raced bravely off his line to deny Marvin Wanitzek, injuring himself in the collision. The best chance of the opening stages fell to Diamantakos, who knocked the ball a whisker past the post when clean through after a peach of a pass from Becker.

Luhukay's charges looked the better team and they continued to push forward. The visitors, for their part, posed hardly any threat. Kyoungrok Choi did test Himmelmann with a left-foot drive from 20 metres, but the keeper had little trouble making the save. In contrast, a goal was in the air whenever the Boys in Brown drove into the Karlsruhe danger area. Sobota hit another shot on goal from the edge of the box, but Benjamin Uphoff got down smartly to make the save. For all the attacking play, a cutting edge was lacking, and it ended goalless at the break. 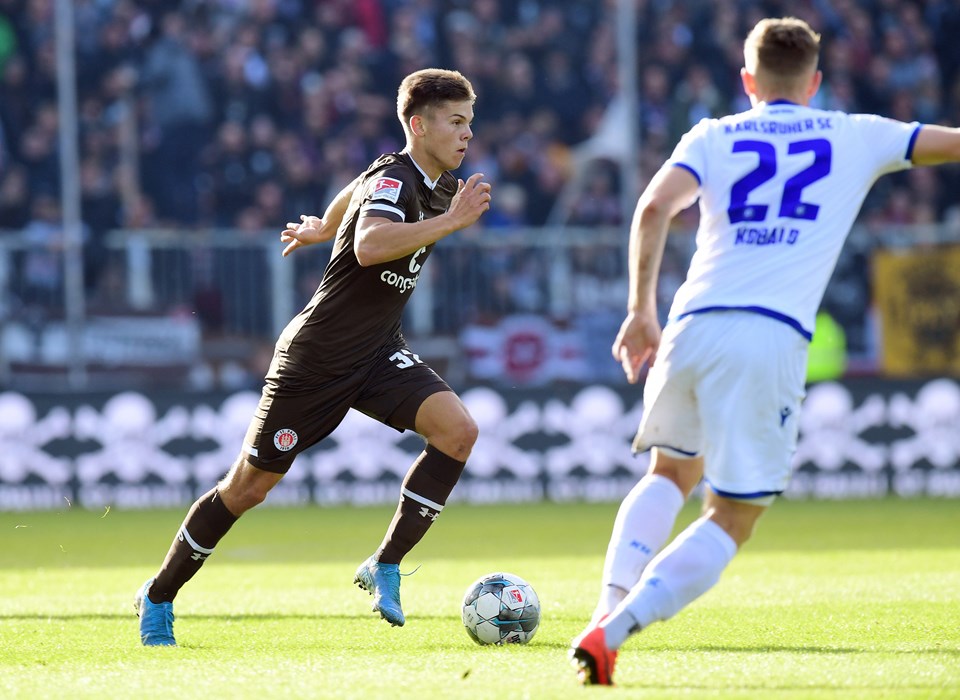 Finn Ole Becker was one of five players returning to the starting lineup.

The second half began with a bang. With less than a minute on the clock, Marco Thiede brought down Daniel Buballa in the box and referee Christof Günsch pointed to the spot. It went to VAR and after a three-minute wait, including a check in the review area, Diamantakos was finally able to step up and guide the ball into the bottom left-hand corner. Eleven minutes later, the Boys in Brown were awarded another penalty. Lukas Fröde caught Miyaichi in the face when attempting to clear, and this time Diamantakos hit the spot-kick straight down the middle to make it 2-0.

Karlsruhe took a while to recover, but when they did, the threat was tangible. Daniel Gordon headed a Wanitzek corner just wide on 71, and then substitute Marvin Pourié knocked a shot past the post with just Himmelmann to beat following an excellent through ball from Christoph Kobald.

In the closing stages, Diamantakos was denied a hat-trick by Uphoff. The rebound fell to Miyaichi, who blasted the ball over the top from five metres. Almost immediately, the visitors were back in it when Marc Lorenz struck an angled left-foot drive into the far corner. And 60 seconds into the five minutes of time added on, Pourié headed the equaliser from a Wanitzek corner. Karlsruhe then went out in search of a winner, with the result that the Boys in Brown had to settle for a 2-2 draw.