NO REGRETS FOR OHLSSON

Right-back Sebastian Ohlsson became the club's eighth and final summer signing when he put pen to paper on a three-year deal just before the transfer deadline in late August. Ohlsson, who had spent his entire career with Gothenburg clubs before moving to the Millerntor, hasn't regretted his decision for a second - on the contrary! The 26-year-old feels very much at home in Hamburg and at the club and says the move was the "perfect step".

"We haven't seen much of the sun recently, so I'm obviously happy with the weather," said Ohlsson after the first two sessions of the winter training camp. While the state of the pitch could be better, there are no complaints from him about the team hotel. The Swede is also very happy with the rooming arrangements, as he gets on very well with roommate Matt Penney: "Matt's a good guy. We're a good match and do a lot of things together away from training as well." Ohlsson and Penney are a good fit, then, and so are Ohlsson and St. Pauli!

"I haven't regretted making the move to the Millerntor for a second," said the Swede, who was born in Gothenburg and had previously only played for Gothenburg clubs in Qviding FIF, Örgryte and IFK. "It was the right moment for me to do something new. I simply felt it was time to take the next step. Moving to St. Pauli was the perfect step for me," the right-back added, reflecting on his four-and-a-half months with the club. 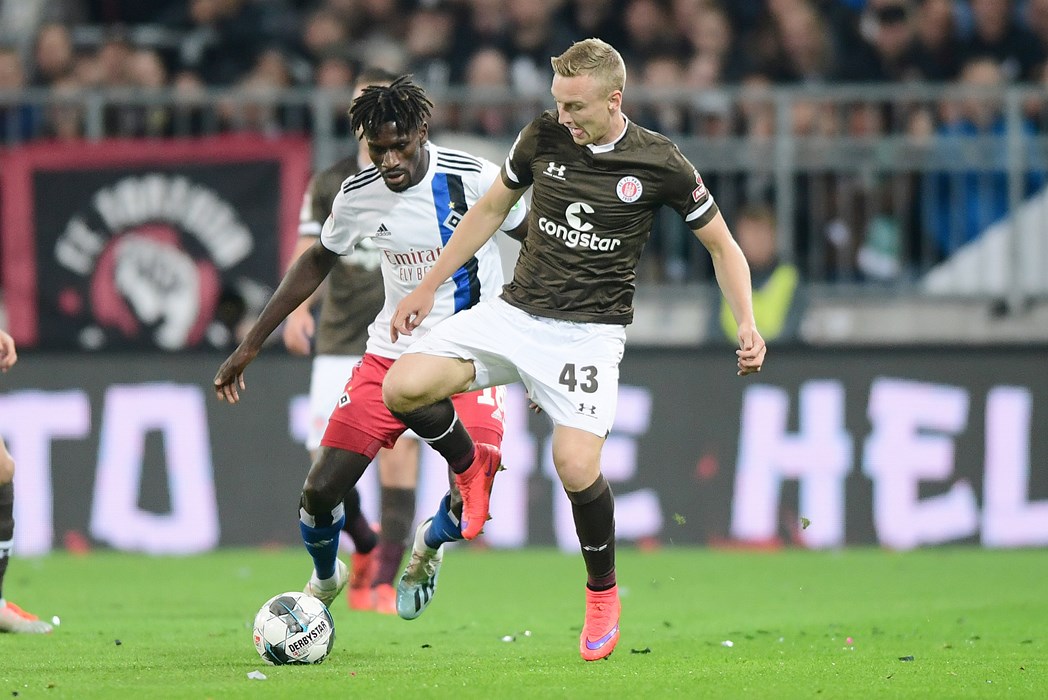 Sebastian Ohlsson (seen here under challenge from Bakery Jatta) made his competitive debut for the club in the 2-0 derby win over HSV, which he described as the highlight of the season so far.

Ohlsson rapidly acclimatised to Bundesliga 2, despite everything going "a bit faster" when compared with the top flight in Sweden and the greater emphasis on the "direct duel with your opponent". Settling into life in Hamburg wasn't a problem either. "Gothenburg and Hamburg aren't that different, and the weather's pretty much the same," he said. "Hamburg is much bigger, though, so there's a lot more to do, but if you ever go to Gothenburg, you should take a trip into the archipelago." No homesickness, then? "No, I've felt more and more at home in Hamburg as the months have passed and I don't really miss anything, but if I could, I'd move my friends and family over to Hamburg," said Ohlsson, whose father and brothers have already made several visits to the city and served as talismans for all five home wins.

Though the next home game is some three weeks away, there's plenty to do until then. Ohlsson and his teammates are working flat out in the south of Valencia in preparation for the second part of the season, which kicks off at Fürth at the end of the month. Our No43 hopes to play as often as possible in that time and, of course, collect as many points as possible. Ohlsson has started 10 of the 15 competitive games since he joined the club in late August and performed well overall. Head coach Jos Luhukay had been using him at right-back but switched him to left-back for the final two home games against Wehen Wiesbaden and Arminia Bielefeld. No problem for the 26-year-old, who impressed on the "wrong" side as well.

"They were two really good team performances," said Ohlsson looking back to the crucial victories before the winter break. "Obviously we'll be looking to build on them in the second part of the season," he concluded.

Sebastian Ohlsson has impressed throughout the season, not just in the final game of the year against Arminia Bielefeld.

LUHUKAY: "PLAYERS HAVE KEPT THEIR FOCUS AND GOT THE MOST OUT OF IT"

At the end of training camp, Jos Luhukay looked back at the time on the Spanish Mediterranean coast. In this interview, the 56-year-old speaks about…

FLUM: "YOU HAVE TO WORK HARD TO GET BACK"

This season hasn't gone quite according to plan for Johannes Flum. After a lengthy layoff in summer, the 32-year-old needed some time to return to full fitness. We spoke to the midfielder about his personal circumstances, the winter training camp and dealing with the demands of the professional game.