FC St. Pauli claimed a point in the opening home game of 2020, fighting out a 1-1 draw with VfB Stuttgart in front of a sell-out 29,546 crowd at the Millerntor. Henk Veerman gave his side a 56th minute lead, only for Mario Gomez to level on 81.

The Boys in Brown signed off with back-to-back home wins at the end of last year, a run they were determined to extend against promotion contenders VfB Stuttgart. Head coach Jos Luhukay responded to Tuesday evening's 3-0 defeat at Greuther Fürth by making three changes to his side, handing summer recruit Rico Benatelli his first start for the club.

The 27-year-old focused predominantly on his defensive duties in the opening stages, as Stuttgart, operating from a 3-4-2-1 formation, repeatedly created overload situations in the middle of the park. This enabled the visitors to dictate the play early on, albeit without being able to translate their possessional advantage into chances. As the half wore on, the Boys in Brown gradually worked their way back into the game and began to probe up front, fashioning their first clear-cut chance of the half with 34 minutes gone. A flicked-on header from Veerman saw Ryo Miyaichi pop up unchallenged in front of the opposition goal, but the Japan midfielder's shot lacked the accuracy to beat VfB custodian Gregor Kobel.

In their traditional white shirts with the single red hoop, the visitors remained the busier of the two sides and laid down a marker of their own on the stroke of half-time. Robin Himmelmann produced a superb reflex save to turn a Philipp Klement header onto the crossbar, and Mario Gomez was unable to direct the rebound into the net from a tight angle, ensuring the two sides went in goalless at the break. 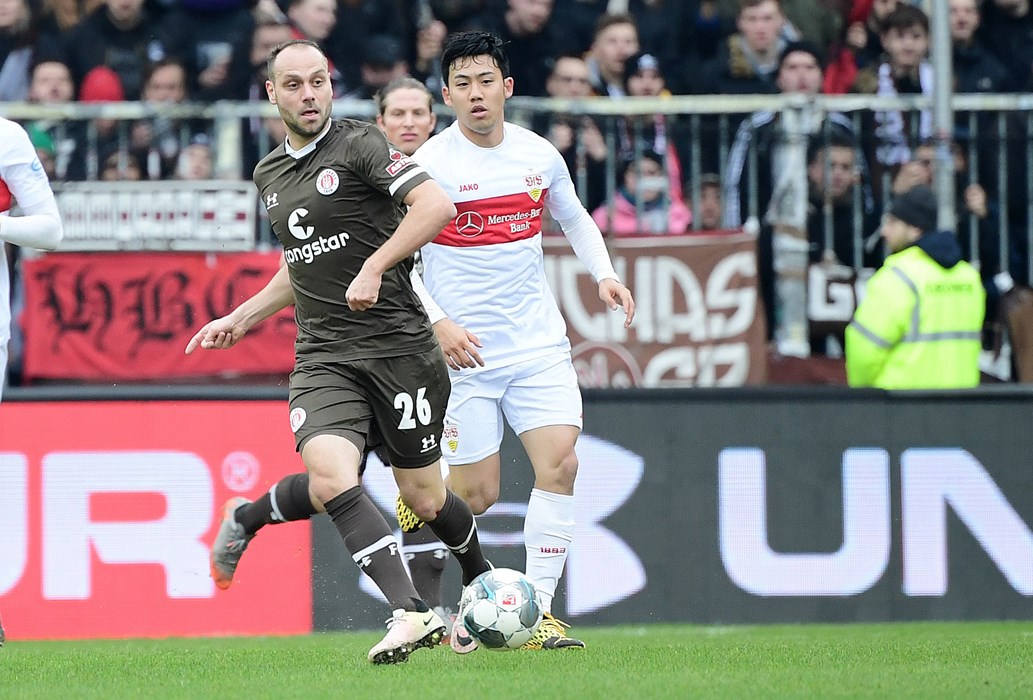 Rico Benatelli looked assured in midfield on his first start for the club.

Stuttgart coach Pellegrino Matarazzo make an attacking substitution at the interval, introducing Nicolas Gonzalez, scorer of a last-minute winner for the relegated Bundesliga side in our 2-1 defeat in the reverse fixture. The Argentine brought new life to the Swabians' left flank, getting in behind the defence, but lacking in accuracy with the final ball. At the other end, Miyaichi gave a demonstration of how it is done, skipping past Phillipp Förster and bursting into the penalty box. Once there, he picked out Veerman, who turned and hit a low pinpoint shot into the bottom corner to open the scoring on 56.

A defiant Stuttgart side stepped up a gear in search of an equaliser. It was now an end-to-end affair that presented Luhukay's charges with space into which to break. Veerman returned the compliment to goal provider Miyaichi and sent the fleet-footed winger on his way, but Kobel produced a brilliant one-handed save to keep out the 27-year-old's powerfully struck effort. Stuttgart kept up the pressure and eventually found an equaliser through Gomez, who knocked a pinpoint left-foot shot into the bottom corner eight minutes from time. With both sides going for all three points, it remained a hugely entertaining contest to the final second of the three minutes of added time, but there was to be no further scoring and it ended in a fair share of the spoils.