Schultz: "Have to be competitive in the air and impose our own style"

The Boys in Brown kick off matchday 3 at SV Sandhausen on Friday evening (18:30 CET). Before his team train for the final time and depart for Sandhausen later today, head coach Timo Schultz faced the media at the pre-match news conference.

...the personnel situation: Christopher Buchtmann and Ryo Miyaichi are the only players not at 100 per cent, otherwise we have a full squad at our disposal. Luca Zander and Luis Coordes are still a bit behind, while Daniel Buballa looked very good in training yesterday. He should be available to play. We'll have a good starting lineup and a good bench, but that's been the case in previous games as well. I'm happy to have so many fit players. It increases the battle for places and raises the level of training, which is something you want as a coach, of course.

...new recruit Guido Burgstaller: He's very down-to-earth and a great guy who fits in the team really well and knows how to integrate. Yesterday's training session was relatively short with it being a short week for us, but you could see he can play football. He's demonstrated his ability to score goals at all his clubs over the years. He'll definitely be in the squad."

...his options up front and a possible front two: "Tactically, we're very flexible. In pre-season, we played a lot with a back three and two or three strikers. If we go with a back four, we usually operate with a central striker. Daniel-Kofi Kyereh has shown he can do well in that role, but we also have three out-and-out strikers in the squad in Boris Tashchy, Simon Makienok and Guido Burgstaller. Kofi is more a player who prefers to operate in the channels and come from deep. I'm really pleased as far as this position is concerned."

...tips from ex-Sandhausen man Leart Paqarada: It makes sense to talk to a player who played for the opposing team for many years and knows the coach and the club. We've also watched Sandhausen, though, and I’ve been acquainted with many of their players for years because they're well known in the league, so I don't think they'll do anything to take us completely by surprise. That said, you're always happy to take a few tips on board when you have an expert in the camp". 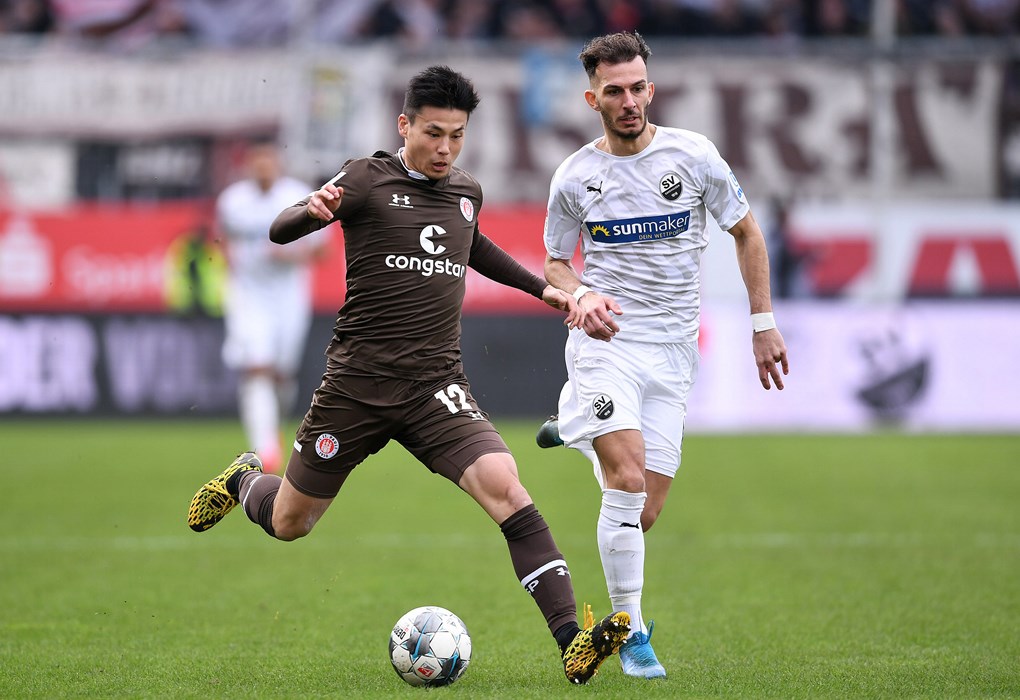 Leart Paqarada (right) was Ryo Miyaichi's opponent back in March, now he’s the “expert in the camp” according to Timo Schultz.

...opponents Sandhausen: "It'll be a typical second division game, that's for sure. Sandhausen are a physically strong side who operate with lots of long and high balls, so we know what we're up against. They're a well-oiled team with two very good and dangerous strikers as well as big and strong-tackling players in defence. We have to be competitive against them, especially in the air, and we have to pressure the ball faster and better than we did against Heidenheim. When we have the ball, we want to keep it on the ground and play at pace. It'll also be a question of imposing our own style rather than adapting to theirs too much."

...any euphoria after the good start: "I've always said things go too quickly for me in both directions. There was no need for me to rubbish everything after the Elversberg game and by the same token I'm not about to go crazy now and tell the lads we'll be playing at the Allianz Arena next year. We've picked up four points, but anyone who's watched the games and knows a thing or two about football will have seen there was an element of luck involved even though we deserved the points because of the effort we put in. We still have a lot of work to do to have a good season. We have to improve collectively and individually if we want to win matches."