MADNESS AT THE MILLERNTOR! TWO-GOAL MEIER THE HERO

What a game! On an evening of high drama FC St. Pauli beat Union Berlin 3-2 thanks to an Alex Meier penalty in the fourth minute of stoppage time. Sami Allagui gave the Boys in Brown the lead with a wonderful strike after 23 minutes before Alex Meier doubled the advantage on 57. Two late goals from Grischa Prömel and Suleiman Abdullahi restored parity for Union, but Meier held his nerve from the spot to settle it at the death.

Head coach Markus Kauczinski made five changes to the side that lost 2-1 at Darmstadt last time out. Jan-Philipp Kalla, Johannes Flum, Waldemar Sobota, Sami Allagui and Alex Meier all started in place of Luca Zander, Jeremy Dudziak, Christopher Buchtmann, Ryo Miyaichi and the injured Dimitrios Diamantakos. For Meier it was his first appearance at the Millerntor since the 4-0 defeat of Duisburg on 18 May 2003, 5,741 days previously. Union boss Urs Fischer changed his side in four positions compared with the 2-0 home win over Cologne, Julian Ryerson, Christopher Lenz, Carlos Mané and Sebastian Andersson coming in for the suspended Ken Reichel and Christopher Trimmel, Sebastian Polter (injured) and Suleiman Abdullahi.

In a cracking atmosphere at a packed Millerntor the visitors fashioned the first opening in the fourth minute when new recruit Carlos Mané crossed into the danger area. Fortunately, Marcel Hartel lost his footing at the crucial moment, allowing Kalla to scramble the ball clear. Shortly after, Marvin Knoll almost got on the end of an underhit backpass by Manuel Schmiedebach. Union keeper Rafal Gikiewicz then appeared to foul Allagui just outside the box and could consider himself lucky not to give away a free-kick.

On the quarter hour Robin Himmelmann breathed a sigh of relief when his attempted kick-out struck Felix Kroos and bounced away to the safety of the touchline. Five minutes later Himmelmann had to stretch to keep out a dinked effort from Kroos, who latched onto an undercooked header from Christopher Avevor. Almost immediately, Himmelmann was in the thick of things again, this time recovering quickly to claw back Marvin Friedrich's scuffed effort just before it could cross the line.

Instead, it was Markus Kauczinski's side who opened the scoring – and what a goal it was! Allagui had originally attempted to find Meier but the ball found its way back to him. The Tunisian striker chested the ball down and dispatched a magnificent half-volley into the top-left corner from nearly 30 metres out. Gikiewicz did get a hand to the ball but there was nothing he could do to prevent it smacking into the back of the net!

The game remained a quality affair and more than lived up to its top-game billing. Union carried a constant threat and had the next chance through Kroos, whose shot was blocked by Daniel Buballa. Kroos then tried his luck with a free-kick but aimed a couple of metres too high. Two minutes from half-time, the Boys in Brown went close with a free-kick of their own. Knoll delivered it into the box from the right and Allagui helped it on, only to see it clear the crossbar. Allagui had another opportunity on the stroke of half-time when he met Kalla's cross from the right corner of the box. This time the ball flew a metre wide of the left-hand upright. 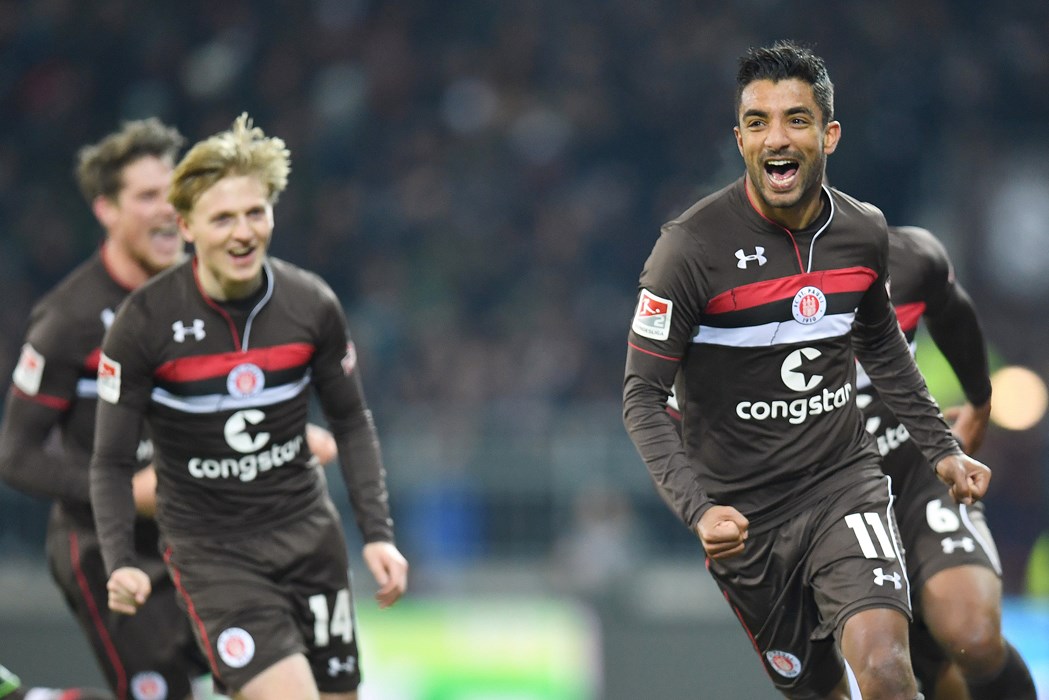 Sami Allagui wheels away after opening the scoring with a cracker.

Both sides emerged unchanged for the second half. Union immediately seized control and pushed forward in search of an equaliser, but the Boys in Brown were giving little away at the back. When the ball did make an appearance in the danger area, Himmelmann was on hand to deny Sebastian Andersson. Avevor took a whack from his keeper in the process but was able to continue after a brief spell of treatment.

Two minutes later it was 2-0. Knoll swung a corner into the mixer and Alex Meier outjumped Hübner to send a glancing header into the far corner. What a return to the Millerntor! With Union desperate to find a way back, there was space for counterattacks. On one such break, the ball found its way to Sobota, whose shot took a deflection and came down just a touch too late.

With the Boys in Brown fighting for every ball as if their lives depended on it, the Millerntor was a cauldron of noise. Union carried on regardless, and Hartel fired wide from 22 metres on 73. Kauczinski responded by making his first substitution, Allagui leaving the field to a deserved round of applause from the fans to be replaced by Christopher Buchtmann.

The visitors still refused to give up. On 78, Substitute Suleiman Abdullahi tried his luck with a shot in the turn that flew wide of the post. Minutes later, fellow sub Berkan Taz went uncomfortably close with an effort that fizzed just wide of the upright. The pressure was relentless, and the game entered the closing stages with the Boys in Brown pinned back in their own half.

Ryo Miyaichi came on for Mats Møller Dæhli in the 84th minute but then the visitors halved the deficit when Prömel tapped home from close range following a free-kick. It was to get even worse just 85 seconds later. Himmelmann kept out the first effort from Kroos but there was nothing he could do from the resulting corner to stop Abdullahi levelling the scores.

The Boys in Brown looked to hit back immediately and carved out an opportunity when Daniel Buballa pushed forward and knocked the ball to Buchtmann. He failed to make a proper contact, however, and Gikiewicz gathered safely. The game moved into stoppage time and the drama reached its peak when Abdullahi brought down Buchtmann in the box and referee Guido Winkmann pointed to the spot. Meier grabbed the ball and dispatched it with aplomb into the bottom right corner to win it at the death. MADNESS at the Millerntor!!!

The second derby of the season is approaching fast. Ahead of Saturday's game at the Volkspark, head coach Jos Luhukay fielded questions from the Hamburg media, speaking about...