FC St. Pauli were beaten 4-1 by Bundesliga outfit SV Werder Bremen in Wednesday's friendly. Werder dominated the first half and led 3-0 at the break thanks to goals from Tahith Cong, Joshua Sargent and Leonardo Bittencourt. A much-improved performance by the Boys in Brown after the interval was rewarded when Borys Tashchy pulled one back on 65, but a second goal for Chong three minutes before the end gave the home side a 4-1 victory.

Bremen, who have made a good start to their Bundesliga campaign with two wins from their first three games, came out of the traps faster than the Boys in Brown and fashioned the first good chance early on. After Afeez Aremu had fouled Kevin Möhwald just outside the box, Leonardo Bittencourt cheekily struck the free kick under the wall. The ball took a deflection, but Dennis Smarsch was able to gather. Faced with the aggressive pressing of Timo Schultz’s side, Werder escaped the stranglehold with some accurate passing to launch a series of quick counterthrusts. One such raid in the sixth minute saw Smarsch defuse an 18-metre shot by Romano Schmid.

There was nothing the keeper could do five minutes later, however, when Felix Agu played the ball into the box for Tahith Chong, on loan from Manchester United, to find the bottom left corner from 13 metres. The Bundesliga side maintained the pressure and soon added a second. Möhwald fed Joshua Sargent, who hit a pinpoint shot into the same corner from the edge of the penalty area. Werder were presented with another opportunity nine minutes later with another free-kick. Bittencourt stepped up again and this time opted to go over the wall, but Smarsch was on hand to make the save.

The Boys in Brown struggled to create goalscoring opportunities against the compact Bremen defence. At the other end, they tightened things up and stemmed the flow of Werder chances. The home side remained a threat, however, and eventually made it 3-0 through Bittencourt, who capitalised on a square ball from Möhwald to finish into the bottom left corner.

Smarsch prevented a fourth Werder goal in the 38th minute with a smart double stop from Theodor Gebre Selassie and Bittencourt before a deflected shot by Schmid landed on top of the goal and Ilia Gruev headed just wide from a corner. Borys Tashchy then forced a save from Eduardo Dos Santos Haesler at the near post, leaving Werder to go in three goals to the good at the break. 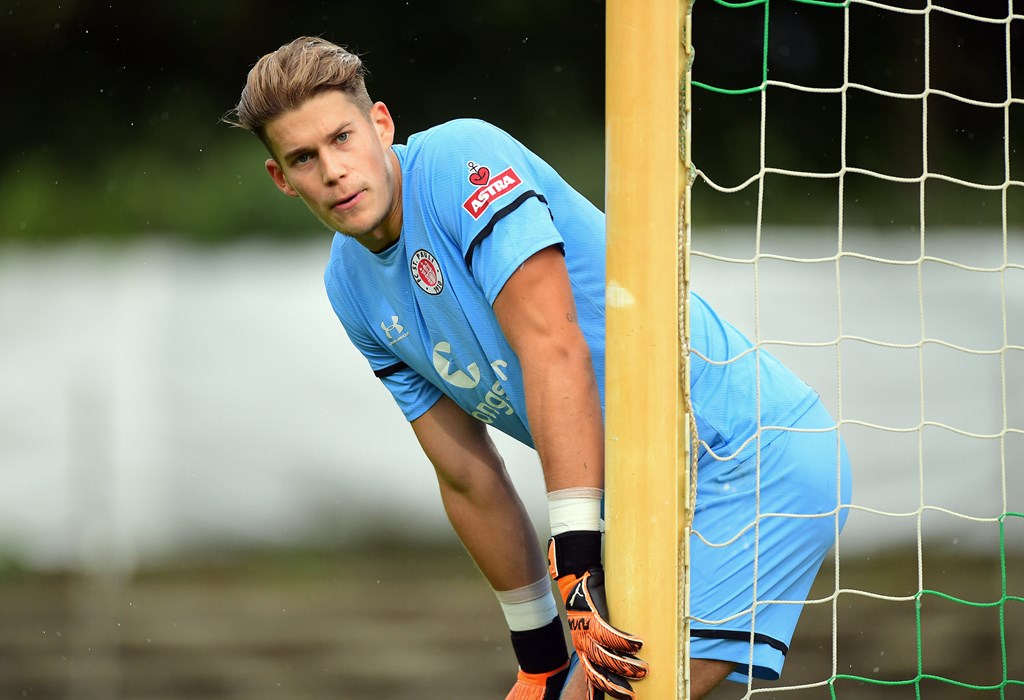 Keeper Dennis Smarsch had plenty to do in the first half and prevented his side from falling even further behind with some good saves.

The Boys in Brown emerged unchanged for the second half, while Werder made two changes. There was also a change in the weather, with the heavy rain giving an already wet pitch a thorough soaking. Schultz's side began much better and shifted the action towards the Werder box, but lacked precision in the final third. A low ball in from Christian Viet would have been turned into his own goal by a Bremen defender had Haesler not been alert to the danger. Then, a Guido Burgstaller shot from 14 metres was on target until it took a decisive deflection.

The pace of the game dropped slightly but it was still a high-intensity affair. In the 62nd minute, Lukas Daschner drew a foul outside the box and took the free-kick himself, only to smash the ball into the wall. Three minutes later, the ball did find the net, however. A headed clearance fell to Tashchy, who left Haesler powerless with a first-time effort from the edge of the box into the bottom right corner.

With the game entering the final quarter of an hour, Timo Schultz freshened things up with six substitutions. His side were edging the possession by now but were unable to create any genuine chances, despite spending a lot of time in and around the Bremen penalty area. The Bundesliga side kept things tight at the back and continued to carry a threat up front.

Smarsch produced another good save to deny substitute Oscar Schönfelder four minutes from time but could only look on as Chong dispatched a perfectly placed shot into the bottom right corner 60 seconds later.