Ziereis: "Time we got a result at Aue"

For Philipp Ziereis, 2019 began disastrously when the centre-back tore the cruciate and medial collateral ligaments in his right knee in a training camp friendly against Wehen Wiesbaden. A long layoff followed until he returned to action in October, making two appearances for the Under-23s before featuring against both Karlsruhe and Bochum in the second division. After the international break, Ziereis aims to go flat out in the last five games of the year. The first of them, at Aue next Friday, will hopefully see the Boys in Brown get back to winning ways.

"There are two ways of looking at it," said Philipp Ziereis when asked whether the free weekend was good for him or not. "I played in the last two games and was in good nick, but the fixture list is how it is and you have to accept that." The defender would have had no objections if he'd played for the third weekend in a row, but "a weekend off is also good for you". Ziereis is receiving a visit from Lennart Thy, with whom he plans to enjoy a "relaxing weekend".

The knee injury Ziereis sustained in mid-January sidelined him for nine months until he made his long-awaited return to action in the friendly against Werder Bremen in mid-October. "It all went very briskly after that," he said, looking back at four games in three weeks. After two outings for the Under-23s, he made his first league appearance at home against Karlsruhe, rather sooner than expected, when Matt Penney Mitte picked up an injury in the first half and had to go off. "It was like being thrown in at the deep end," he said. "I had hardly time to warm up, but it was fantastic to be back." The only dampener on his return, which continued with a 90-minute appearance against Bochum a week later, was the result (2‑2 from 2-0).

Though it was a long way back for Ziereis, it wasn't an entirely new experience. In May 2017, the defender sustained a muscle injury that kept him out of the first team until March 2018. Was it harder for him this time? "Good question," he said, before adding: "The road back was easier this time because the steps to your recovery are more clearly defined when you've had a cruciate tear. The plan is more specific in terms of what you do after three, five and six months. Muscle tears are less common and it's different. There, we had to keep assessing how the muscle was reacting to the workload." 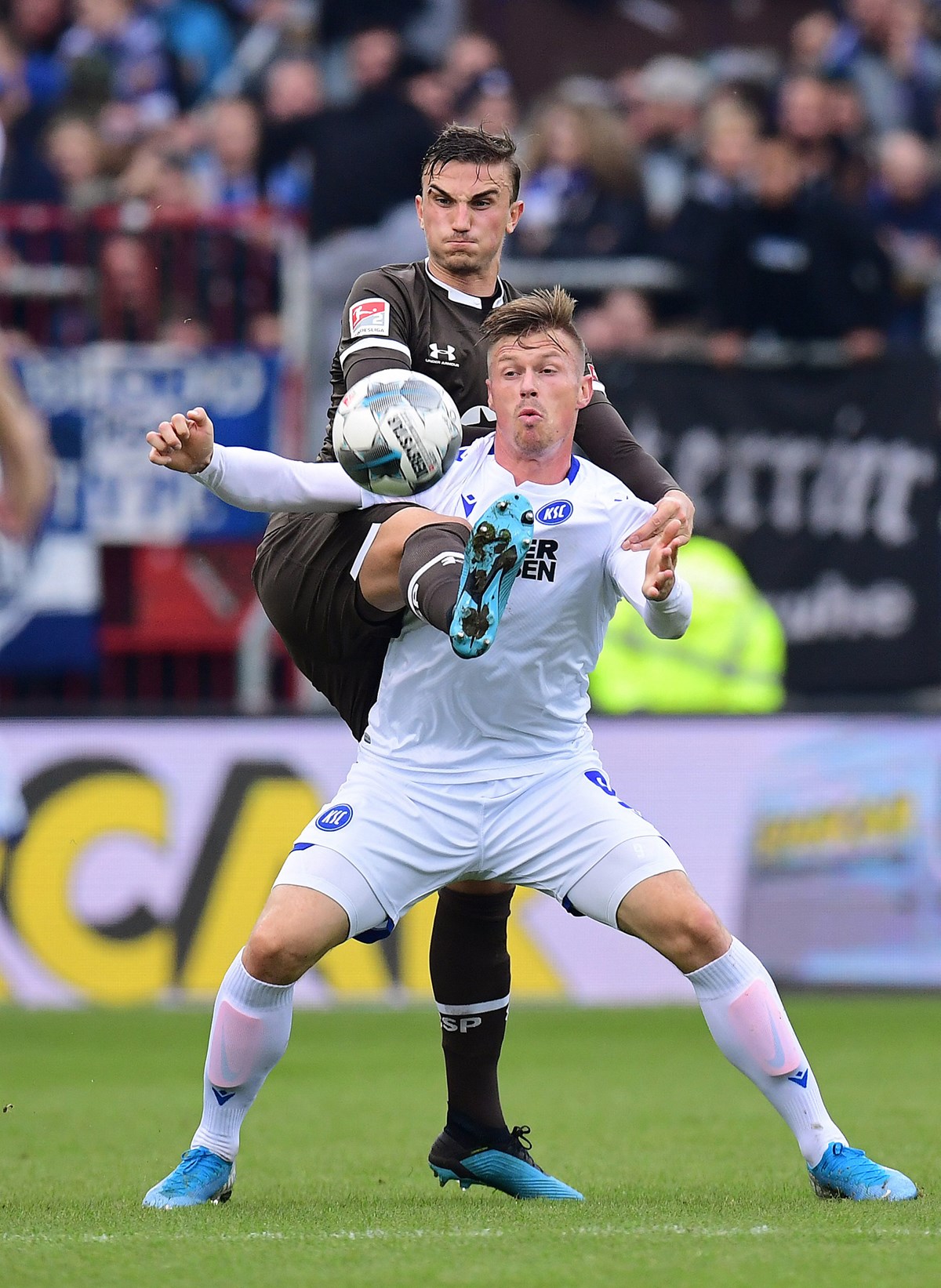 Somewhat unexpectedly, Philipp Ziereis (seen here challenging for the ball with Marvin Pourié) celebrated his return to league action at home against KSC.

Either way, the road to recovery was "long and hard" both times. The defender is glad the ordeal is over and he can do what he likes doing most – playing football. "For me it's obviously about staying fit now," said Ziereis, who despite being in good shape still needs to get a few more games under his belt to reach peak condition. "You can train as much as you like but fitness comes through playing," he explained.

There are five games left until the winter break, games Ziereis described as "pivotal". If the Boys in Brown are to bring their current run of five league games without a win to an end, they will have to "keep at it", he said. "Our performances haven't been bad in recent weeks; we just haven't claimed our reward." Friday's trip to Aue is the game targeted to usher in the turnaround and the first win since the end of September, to which Ziereis hopes to contribute with a decent performance, hopefully as a member of the starting lineup.

"We know Aue are having a good season and are very tough to beat at home, but we have no reason to hide and so we're going there to win. It's time we got a result there," said Ziereis, given our recent poor record in the Ore Mountains (four defeats in a row).

The German Football League (DFL) released the outline fixture list for the 2020-21 season on Friday afternoon. In the top two divisions, the new campaign kicks off around the third weekend of September (18-21.9.2020) and includes a much shorter winter break than usual.